A gang of moped raiders armed with hammers, knives and a gun stole £1 million worth of mobile phones and tablets in 17 raids on stores across London, a court heard. The gang of young men allegedly raided Three Mobile shops where they would smash their way in with a battering ram, break into the […] 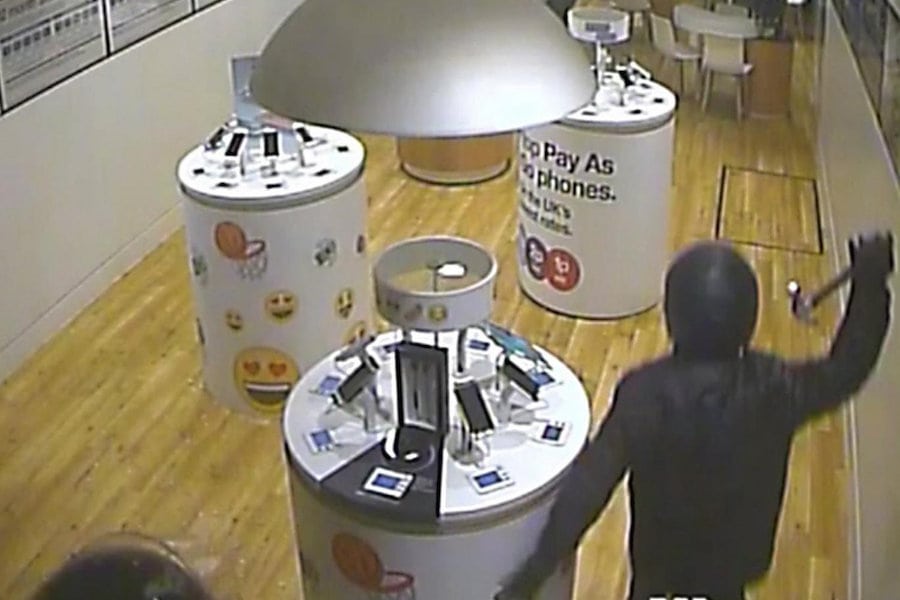 A gang of moped raiders armed with hammers, knives and a gun stole £1 million worth of mobile phones and tablets in 17 raids on stores across London, a court heard.

The gang of young men allegedly raided Three Mobile shops where they would smash their way in with a battering ram, break into the stock room and swipe the latest handsets, before escaping on waiting mopeds.

Security guards placed in some stores overnight by the mobile company were brutally attacked by gang members with chairs and hammers, while others grabbed phones and tablets from the store room.

In one brazen raid at the Three store in Oxford Street, at 2.40am one of the raiders threatened a member of the public with a gun, while the others smashed their way into the store and stole dozens of devices worth £20,000.

The phones, which were stolen in the early hours of the morning, were then sold to shops in East London from where they would be sold abroad for just below market value.

In just over six months the gang stole phones and tablets worth about £1million, it was said.

Bobby Kennedy, 22 and Chris Costi, 19 are both charged with conspiracy to commit aggravated burglary and conspiracy to rob between May and November last year.

Three other members of the gang Dylan Castano-Lopez, 19, Alfie Kennedy, 20, brother of Bobby, and Adam Atallah, 21, all previously pleaded guilty to their part in the conspiracy, the jury heard.

Opening the case prosecutor Michael Shaw, said: “In the summer of last year, and into the autumn, a group of young men joined in a robbery and burglary spree in London.

“They armed themselves with weapons, knives, hammers, and guns, arriving on mopeds and using crash helmets as a disguise, and smashed their way into mobile phone stores owned by the network Three.

“They smashed their way into the stores’ stock rooms taking about £1million worth of mobile phones which they sold to handlers in east London.”

Referring to the gang, the prosecutor said: “They are a team of individuals who know each other well and are prepared to use considerable violence when they come across security guards or police officers.

“They were prepared to use force and also weapons when the rewards were so large.”

The jury were told the stolen phones were sold on to customers across the world wanting the latest handsets.

The prosecutor said: “Phones have been found all round the world, in Bangladesh, Pakistan and they are worth a lot of money out there.

“That is money the defendants didn’t work for, instead it was easier to smash their way into the mobile phone stock room and steal them.”

The gang repeatedly targeted the same shops after they were restocked by the phone company, including one in Walthamstow which was hit four times.

After a while Three Mobile began to put trackers in their phones in store and also had security guards stay in store overnight.

The prosecutor said: “Threats to shoot people were made repeatedly. Threats of serious violence were also made.

“This is a well organised group of thieves. These are organised professional criminals.”

The jury were shown CCTV footage from the first burglary in Walthamstow on May 1, last year, at around 5am.

Four burglars used two mopeds and two of the gang were seen smashing their way though the front window, wearing black clothes and crash helmets.

Footage from inside the stock room shows the door smashed off its hinges and two burglars go in and swipe all the phones, with the whole raid taking just over three minutes.

After getting away the raiders would dump the mopeds and then book a cab away from the area.

Within hours after the raids the gang would then meet with two shop owners in East London, who would buy the phones off them, before selling them on to countries around the world.

In another raid at the Wood Green store when police arrived on the scene, two officers were left with cuts when they wrestled with some of the gang , with two arrested at the scene.

CCTV footage from inside one store of another raid showed a security guard, who had tried to hide, being attacked and beaten by the gang, hitting him with a chair.

The jury were also shown dramatic footage from police helicopter of a ten mile chase of four of the gang on two mopeds through the streets of London after the last of the burglaries in October last year.

It was after that raid in Walthamstow and police chase that the Kennedy brothers were arrested alongside Atallah in the early hours of the morning.

The prosecutor: “We say (Bobby) Kennedy, and his mate Costi, are both part of a gang who were burgling premises.

“But it wasn’t a simple burglary. These were aggravated burglary, they had weapons with them and that was the tip of the iceberg- he was involved in other serious offences.

“We say they were involved in this conspiracy. This was quite a well organised, sophisticated plan. The offences that you are looking at are the manifestation of that plan.

“If we hadn’t caught them they would still doing it now.”