This selfish driver blocked an ambulance when they parked on double yellow lines – just inches away from a ramp used by paramedics to carry patients on board. Shocked paramedics tweeted snaps of the maroon Nissan which pulled up as the crew went into a house to help a poorly patient. The ambulance had its […] 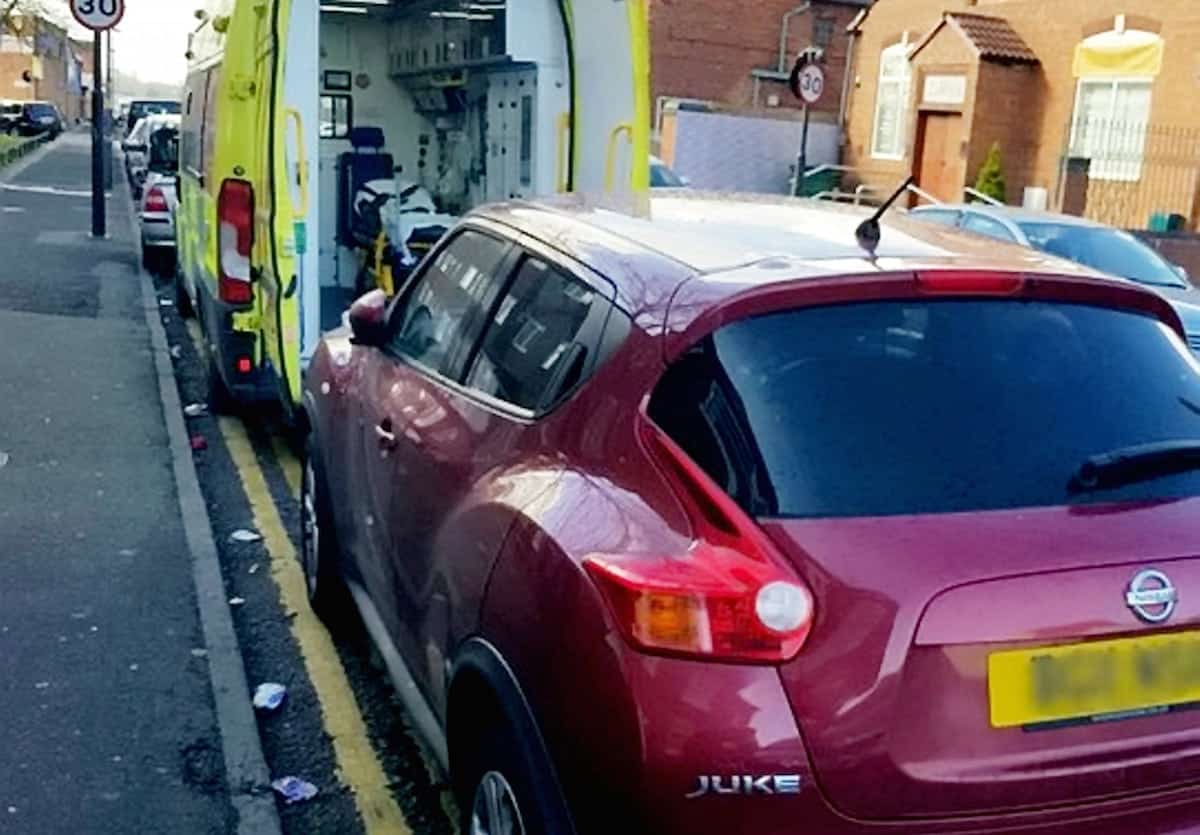 This selfish driver blocked an ambulance when they parked on double yellow lines – just inches away from a ramp used by paramedics to carry patients on board.

Shocked paramedics tweeted snaps of the maroon Nissan which pulled up as the crew went into a house to help a poorly patient.

The ambulance had its back doors wide open and the ramp was clearly down when the car was casually left on double yellow lines.

Shockingly, another car had also beeen parked in front of the ambulance meaning it was totally boxed in.

The dodgy parking meant paramedics were unable to stretcher the patient onto the ambulance, and delayed their journey to hospital.

“When returning to ? with PT to goto ?. Cars had blocked us in front & back.

“Despite us parking on double yellows with our rear light flashing.

“Unable to get the stretcher on or off. #inconsiderateparking. It says keep clear on the ? for a reason ?”

Good Samaritans were eventually able to track down the owner of the Nissan who claimed they thought they could park there because they had a disabled relative.

Simon Wong later tweeted: “The helpful public eventually found the owner who moved their? back a few feet to allow us to get the PT into the ?.

“Driver said they were allowed to park there as their relative was disabled & didn’t understand what the problem was parking so close to the back of the ?”

Since the images were shared, a host of users have criticised the driver on social media.

Carys Miles (@CarysMiles) said: “I think this is when we call the police and get them to tow it 30 metres down the road!”

Jay (@Jaysmithjay) tweeted: “Oh the irony of them having a blue badge on the dash.

“I’m sure they would be incensed if someone parked in such a way as to restrict their access.”

Sazzle (@Saz8943Taylor) said: “This is where it should be legal to ‘nudge’ said car out of the way and all the damage paid for by the car’s insurance.

“There is just no need, some people have no common sense!”

A West Midlands Ambulance Service spokesperson said: “It is hugely disappointing that members of the public think it is acceptable to park so close to an ambulance, so that we are unable to load patients on to the vehicle when they need transporting to hospital.

“We would hope it would be common sense to people to avoid parking so close because it has the potential, as was the case in this situation, to delay the patient getting to hospital.

“All of our ambulances have ‘keep clear’ messages clearly visible on the back of them.

“Before deciding to park so close to our ambulances we urge people to stop and think how they would feel if it was their family member delayed getting to hospital in an emergency because someone had blocked one of our vehicles in.”

The latest incident comes days after jobless Kirsty Sharman, 26, was fined for leaving an abusive note on an ambulance which parked outside her home while on a 999 call.