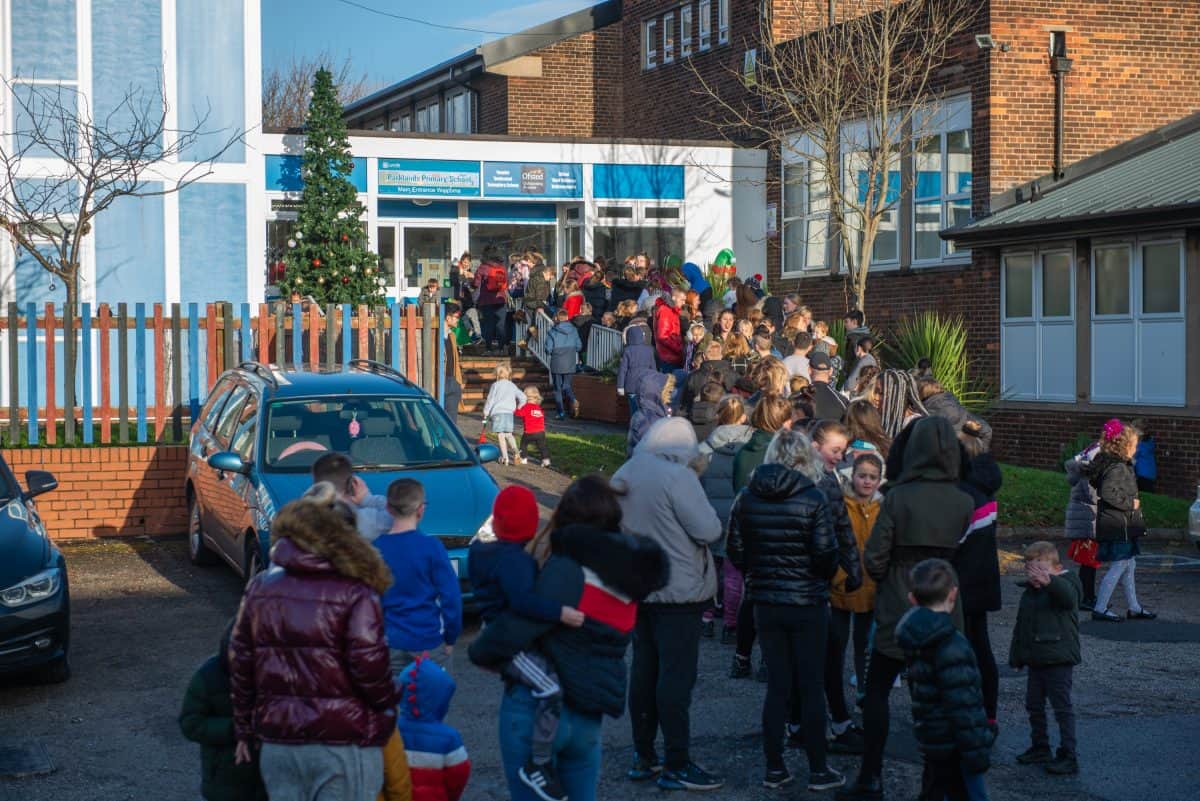 A primary school has opened its doors to serve 800 Christmas dinners and give presents to underprivileged youngsters – after realising they wouldn’t get one at home.

Staff at Parklands Primary School volunteered their time to serve up a hot meal for the school’s 328 pupils and their families today at its “Christmas Eve Eve” party.

Youngsters were able to meet Santa Claus at the party which was set up headteacher Chris Dyson.

He says he was left “heartbroken” when he discovered some of his pupils had never met Father Christmas and many wouldn’t receive gifts.

The school’s hall was decorated with a tree and tinsel as Mr Dyson attempted to spread Yuletide joy to families who desperately need it.

Each child received a Christmas present to unwrap – likely to be the only one they will receive this year, Mr Dyson said.

The school, in Leeds, West Yorks., serves one of the largest council estates in Europe and an area in the top 1 percent in England for deprivation.

Only a third of working-age adults have jobs and three-quarters of pupils qualify for the pupil premium, extra money given to schools from the Government to support the poorest children.

Headteacher Chris Dyson, hailed “an inspirational leader” by Ofsted inspectors said: “It broke my heart when I started at the school five years ago and found out that some families don’t even go to visit Santa, which is something we all just take for granted.

“It’s every child’s right to see Santa, and I thought if you can’t go to see him, I’ll bring him to you.

“So I said I would bring Santa to Parklands and get every child at least one present to open.

“I decided to have a party on Christmas Eve, or Christmas Eve eve, whichever was more convenient for staff to come in – unpaid – and help out.”

Today (Mon), 800 people benefited from the headteacher’s generosity, which has been helped by donations from local business who have given cash and gifts, as well as Leeds City Council who have provided food.

Mr Dyson added: “We are in the middle of one of the biggest council estates in Europe, a lot of our families don’t even go off the estate.

“We are situated in one of the most deprived areas of the country, with 70 percent of people on free school meals.

“Some of the children wouldn’t get a present at Christmas and don’t even write a letter to Santa.

“Christmas is a vulnerable time for families, its cold and for some people it is the only hot meal they will get this week.

“I’m blessed that I have had so many presents donated, that those with a birthday coming up will get a birthday present as well.”

Mr Dyson took over at the school in 2014, after it went through five headteachers in just one year and was rated inadequate by Ofsted, the government’s education watchdog.

It had the country’s highest number of annual exclusions and a padded cell was used as a form of punishment.

Mr Dyson said he wanted to bring “love and smiles” back to the school and has extended that to the wider community.

He added: “It’s a great day for everyone, and it’s not just for kids in our school. It’s for the entire community, anyone can come and they all do.

“Our first year we had a lot of kids who didn’t come to our school come round, and I said Santa doesn’t turn people away. So we just welcomed everyone.

“Schools are all shut round the country, but not us. We want our community to know we love them, and they deserve that extra love and attention and we endeavour to stay open as much as we can.

“It’s so important. It’s a vulnerable time, food isn’t as plentiful here as where I live. It’s important they get a hot meal.

“These kids will ask why doesn’t Santa answer my letters like he does to people in those middle class areas.

“I want to make sure they feel Santa hasn’t forgotten about them.”