One of Mr Hillerby’s clients is 82-year-old great-grandmother Lucinda Quinn, from east Belfast. “I love seeing him,” she said. “I love Christmas.” 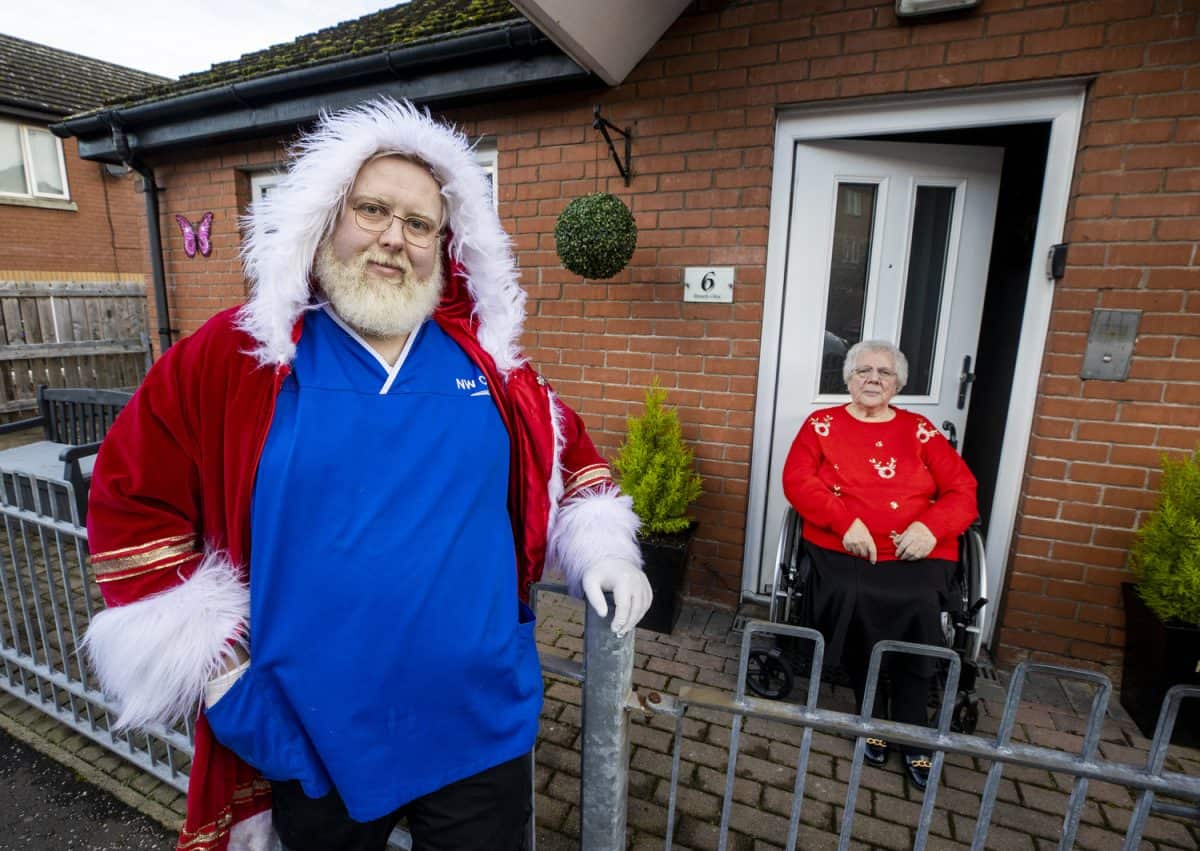 A care worker who bears a striking resemblance to Father Christmas has been delivering much-needed festive cheer on his home visits amid the coronavirus pandemic.

Robert Hillerby’s day job is as a community care worker in Belfast, providing support to a range of older and vulnerable people in their own homes.

But in December every year the 34-year-old transforms into his Kris Kringle alter ego to entertain children across Northern Ireland as a Santa Claus lookalike.

The father-of-four joined independent provider NW Care Belfast in the spring and it was not long before his clients started reporting that their cheerful visitor appeared to be slowly morphing into the North Pole’s most famous resident.

In preparation for his busiest month of the year, Mr Hillerby dyes his hair and beard white and often slips into character with little notice.

He even has a roadworthy sleigh that accompanies him on his Santa stops ahead of December 25.

The south Belfast man explained why he decided to become a care worker.

“When the pandemic hit, the way I looked at that there was going be people vulnerable out there not being able to get out of the house, they may as well see a friendly face,” he said.

“I’m always positive so I thought I’d bring a bit of positivity into their lives too.”

Mr Hillerby said his Santa sideline started off as a bit of joke in his local neighbourhood five years ago.

“I was this big, jolly fella so I put the suit on to help out in the local community,” he said.

“Then one thing led to another and I ended up doing different shopping centres and getting into it. Then I went out on my own and now I go out on my own on my sleigh.

“You put the red suit on and you’re a completely different person. When I started I had a fake beard and kids used to pull it off – you used to constantly have to try to protect the beard.

“Then I decided to grow the real beard, it all gets dyed and I become Santa.

“The beard’s there all year round, and it stays, and when you’re walking into shops and stuff, you still see parents looking and going ‘There’s Santa’.

“People bring their kids up and say ‘Santa is going to put you on the naughty list’ and once they say it you just go straight into the role and entertain the kids for two or three minutes. It makes that child’s day but also makes the parent’s day.”

One of Mr Hillerby’s clients is 82-year-old great-grandmother Lucinda Quinn, from east Belfast.

“I love seeing him,” she said. “I love Christmas.”

The company, which offers training to people with no previous healthcare background, has seen its workforce expand significantly during the pandemic.

Related: ‘Now we have a dream’: Syrian families share experiences of Christmas in UK