A furious pensioner has spoken of his shock after claiming his brand new slippers had “swastikas all over the soles”. Sam Purdie was outraged to find a pair of £15 slippers he ordered from online retail giant, Amazon, were covered in a pattern which apparently included the symbol. The retired engineer, from Letham, Perth, said […] 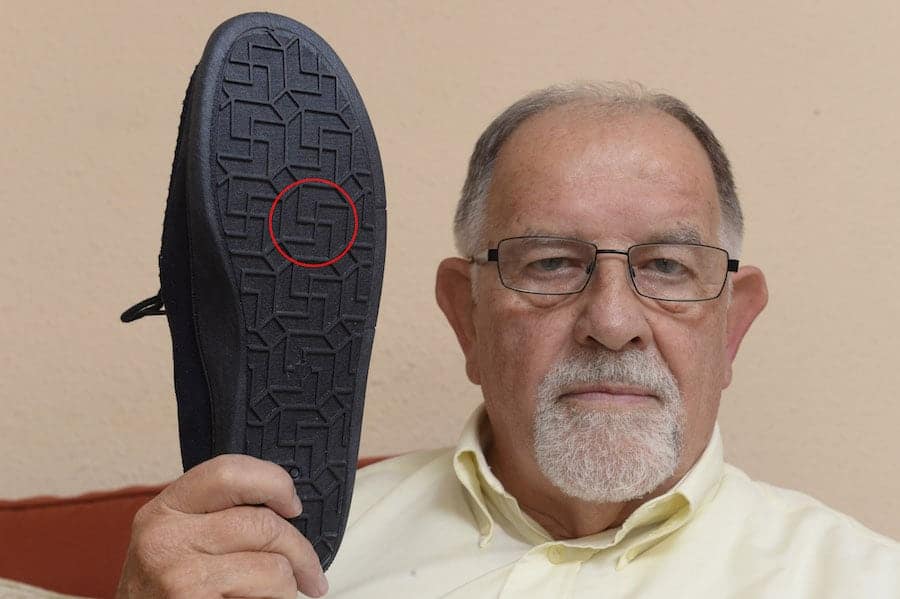 A furious pensioner has spoken of his shock after claiming his brand new slippers had “swastikas all over the soles”.

Sam Purdie was outraged to find a pair of £15 slippers he ordered from online retail giant, Amazon, were covered in a pattern which apparently included the symbol.

The retired engineer, from Letham, Perth, said he tried to warn other customers on Amazon, but his review of the Jo & Joe brand slip-ons was censored by the company.

Although a regular customer of Amazon, Sam said it was the first time he had ordered the brand of slippers — supplied by Burnley-based LJ&R Footwear.

Sam, 81, said the navy slippers looked “perfectly respectable” online, but he was “very shocked” when they arrived on his doorstep.

He said: “I ordered a pair of slippers which on first examination looked good, but when they arrived I realised they had swastikas all over the soles.”

Sam said it was clear straight away what the pattern on the bottom of the slippers depicted.

“You could absolutely notice the pattern right away.

“They looked good on Amazon, but they were of course very careful not to show you the soles of the slippers”, said Sam.

“I am a regular customer with Amazon and they usually ask you to give them a review of products, so I did.

“I wrote that I was not happy with my swastika-embroidered slippers and that I certainly won’t be wearing them. ”

But Sam claims Amazon immediately responded saying he had been abusive in his review and if he continued to be he wouldn’t be allowed to leave reviews again.

He explained: “They responded saying I had been abusive in my review. But it’s an automated response, I think the fact I had used the word swastika upset them.”

But the angry pensioner has said he is still not happy about the slippers.

Sam said: “I am still not happy. I am a customer, they [Amazon] should not be dealing with me as if I am a stranger.

“I am not Jewish, but I am old enough to have very unpleasant memories of swastikas.”

And now Sam has said the offensive slippers should be taken off the market.

He said: “They [the slippers] should be taken off the market. I haven’t asked for a rebate or anything from them, but they will never be going on my feet.”

A spokeswoman for Burnley-based suppliers LJ&R Footwear said: “This is the first time that this has been brought to our attention.

“This outsole is widely available in China and has not been developed by us.”

She added: “Any resemblance to the sign in question is purely coincidental. It is a honeycomb maze pattern.”

In January a shoe company in the US apologised and recalled a boot after a viral photo showed it left behind tiny swastika prints.

Conal International Trading Co, which manufactures the Polar Fox boot, said it was “no way intentional” and an “obvious mistake” made by manufacturers in China.