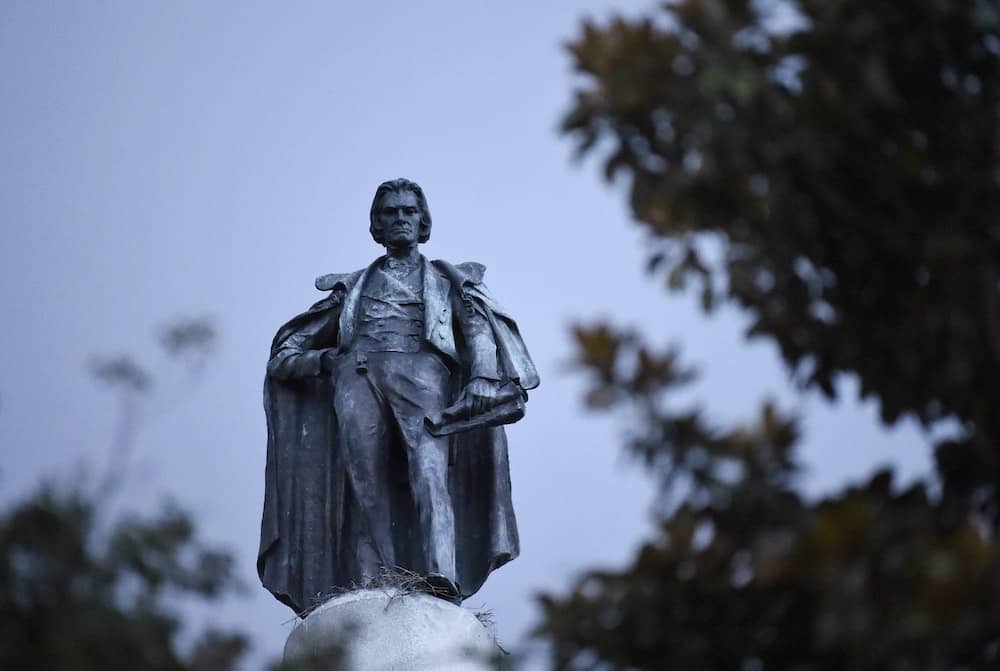 Several hundred people gathered in Marion Square in the historic South Carolina city of Charleston to watch the removal of a statue of former vice president and slavery advocate John C Calhoun.

Officials voted unanimously on Tuesday to remove the statue, which stands at the top of a 100ft pedestal.

It is the latest in a wave of actions arising from protests against racism and police brutality against African Americans.

Some onlookers grew restless just after 1am local time (6am BST) and began to leave just before crews made preparations for the statue’s removal.

Another piece of equipment that appeared to have pulleys attached was being raised to the height of the statue from Calhoun Street, the road that marks the southern border of the square where the statue sits and also bears his name.

Crews also appeared to be removing the plaques that adorn the four sides of the pedestal on which the monument and statue sit.

Council members approved the measure 13-0 in a late vote. The resolution authorised the removal of the statue of the former US vice president and senator from South Carolina.

City officials said eventually that the Calhoun statue will be placed permanently at “an appropriate site where it will be protected and preserved”.

Just before midnight on Tuesday the Charleston Police Department tweeted that: “Calhoun Street between Meeting Street and King Street is closed for the removal of the John C. Calhoun statue,” adding that the street will be closed for several hours.

About 1am on Wednesday, workers using massive cranes began to bring the statue down. A few hundred people gathered at the scene, mostly in favour of removal.

The vote came a week after the mayor, John Tecklenburg, announced he would send the resolution to the City Council. He also took part in the vote.

“I believe that we are setting a new chapter, a more equitable chapter, in our city’s history,” Mr Tecklenburg said, just before the vote.

“We are making the right step. It’s just simply the right thing for us to do.”

Council members heard from dozens of residents for and against the statue’s removal.

Karl L Brady Jr said he knew his support in favour of removal may cost him votes, but that he was voting his conscience in a move he said shows that, in Charleston, “we place white supremacy and white supremacist thought back where it belongs – on the ash heap of history”.

The move comes days after the fifth anniversary of the killing of nine Black parishioners in a racist attack at a Charleston church.

It also comes as cities around the US debate the removal of monuments to Confederate leaders and others after the policy custody death of a Black man, George Floyd, in Minnesota.

The ultimate resting place of the statue has yet to be determined, a decision that will be left up to a special panel.

The mayor has anticipated it would go to a local museum or educational institution.

Related – Chomsky: “Trump Is the Worst Criminal in History, Undeniably”