His family have been living in the village since the 12th Century. 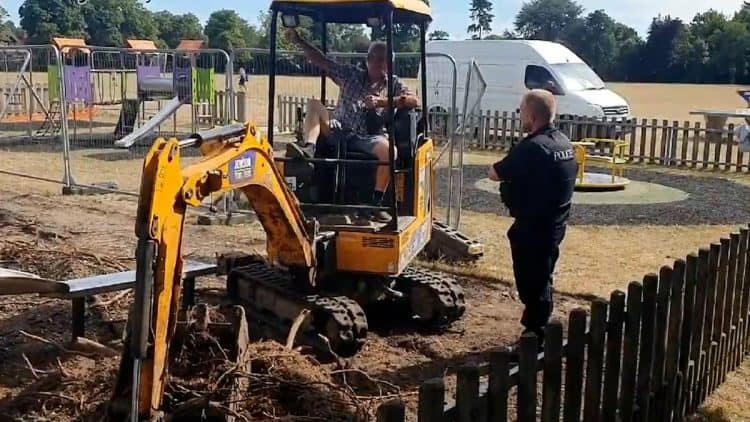 A disabled pensioner hijacked a digger and refused to leave for nearly four hours in protest against a council which he claimed was killing trees.

Lea Awbery, 66, decided he had to take action on Monday (11/07) when he saw contractors digging up the roots of nearby cherry trees.

The removal was undertaken ahead of the re-surfacing of the children’s play area on the corner of Burghfield Common’s Recreation Ground, near Reading, Berks.

Mr Awbery believes the trees were being intentionally killed during the re-surfacing process so that Burghfield Parish Council could build an entrance to the proposed café it hopes to build on the site – a controversial proposal that has firmly split the village.

While protesting, he said: “The trees will not be able to survive the damage [the parish council] have done.

“Somebody has got to make a stand for the village and the trees.

“It’s as simple as that and that’s why I am sat on this digger.”

Mr Awbery, who suffers from lung disease, osteoarthritis, diabetes, and hyperglycaemia, has lived in Burghfield for over 20 years.

His family have been living in the village since the 12th Century.

“My roots are here, unlike these tree roots which are not connected to the trees anymore”, he said.

Mr Awbery was a tree surgeon for 35 years and he believes the cherry trees will die of starvation because the council have dug up too many of their roots to survive.

As well as wanting to save the trees, Mr Awbery’s protest also targeted the parish council’s proposed temporary café development that has divided Burghfield residents in recent weeks.

He said: “They want to put a café on the green so they don’t have to pay rates or rent and they get a cheap pub in the village.”

The development has been a very divisive topic in the village, with more than 130 letters of objection and over 70 letters of support being acknowledged by West Berkshire Council.

Those who object to the development believe the café is a Trojan Horse ploy to get a pub put on the recreation ground and it will lead to an increase in anti-social behaviour in the area, an issue that has been affecting Burghfield in recent months.

Those who support the plans believe the café would be an excellent addition to the community and it would provide villagers with much-needed social space.

Mr Awbery climbed onto the digger at around 1.30pm on Monday (July 11), stopping contractors from being able to continue their work.

A police officer arrived at the scene at 4.05pm to try to convince Mr Awbery to get down from the digger, but he refused on several occasions stating he wanted to see the council promise in writing that they would re-plant the trees if they died.

Throughout the afternoon villagers gathered to witness the protest, and members of the parish council were also present including chairman Tim Ansell.

Mr Ansell said: “I think it’s quite sad to be honest.

“He’d already phoned up the clerk and hurled abuse at her this morning, which is unforgivable and there is no reason for that.

“It’s sad and depressing that people get it in their minds that this is the way to do it.”

He also explained that the parish council took out a badly diseased cherry tree from the site around two years ago, and the council decided to tie in the play area’s re-surfacing with the removal of the tree roots so that the disease would not spread to other trees.

“Our priority is the safety of the other trees and getting the children’s play area ready for the school holidays”, he said.

When asked about the discord caused by the café plans, Mr Ansell said: “I find the division very sad.

“I also know that a lot of that division is caused by a minority who have been spreading untruths.

“Their tactic on a number of things has been to create a divide so that ideally they think the parish council will give up, whereas it’s our job to do what the majority of the people require.”

Mr Awbery did eventually stop his protest at 5pm as he needed to return home to take some medication.

Before stepping down from the digger, the 66-year-old stated the parish council’s decision to resurface the play area had an ulterior motive.

He said: “It’s all part of a bigger scheme with what they want to do with the recreation ground.

Related: NHS workers had letters from bailiffs after refusing to pay parking fine when they were tending to dying Covid patient