Mackenzie Jones, 12, was chased by the group of thugs before being strangled and assaulted when he refused to give them his phone and brother’s bike in Birmingham on February 27 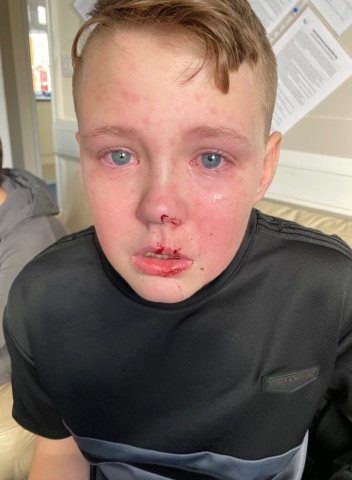 A mother who released shocking pictures of her 12-year-old boy’s injuries after an attempted robbery has blasted police for a lack of urgency to catch the thugs responsible.

Terrified Mackenzie Jones was left injured and shaken after being chased by a group of other children.

He was then strangled and assaulted when he refused to give them his phone and brother’s bike in Birmingham on February 27.

But although his mother Amy Jones called West Midlands Police soon after the attack, she was told the matter was deemed to be non-urgent and was given an appointment to see an officer three days later.

Amy released a distressing photo showing Mackenzie shortly after the attack with blood on his nose and lip.

The Great Barr Academy pupil had the day off school and was out on his bike with a friend when he was set upon by a group of thugs who Ms Jones believes were older pupils at the same school.

She said they asked for his bike and mobile phone, and when he refused they punched him and held him by the throat in Malthouse Lane, Great Barr, Birmingham.

She said she reported it to the police, but when an officer later called she was told it was not deemed urgent.

When she called back after to check when an officer would be meeting her, she was told it would be on March 1, three days after the incident.

Ms Jones, who has two other children aged ten and 14, said: “It’s absolutely awful what has happened.

“Mackenzie is all right now but he’s sore and shaken.

“Thursday was a day off school. It as a dry day and I said ‘go out, I know you’re going to be safe on your bikes’.

“A few minutes later, Mackenzie’s friend came back to me and said ‘Mackenzie’s been attacked’.

“We got to him and he had a bloody nose and was shaking.

“I got out of him that the kids had attempted to steal his bike. They wanted his mobile phone.

“He refused to give it up. He was scared and did not know what to do.

“They tried to strangle him. They put their hands around his neck and they punched him in the face.

“Mackenzie is petrified of going back to school.

“A police officer phoned me later and said ‘by the sounds of the log, it’s not serious’.

“After I told him what happened he said it’s more urgent than they had thought.

“I phoned back later to see when someone was coming and was told I had been given an appointment on Sunday.

“I have got no hope the police are going to do anything.

“It will probably be a slap on the wrist.”

Ms Jones has also launched a petition calling for changes in the law and powers for schools to deal with pupils who attack other students.

A West Midlands Police spokesperson said an investigation is currently under way and the force is in the process of speaking with the victim.

They added: “We received a report of a 12-year-old boy being punched in the face in Aldridge Road, Great Barr, [on February 27].

“An appointment has been made to speak to the boy in a comfortable environment to obtain further information.