"This post is to raise that awareness that it's okay not to be okay and you can or should speak out." 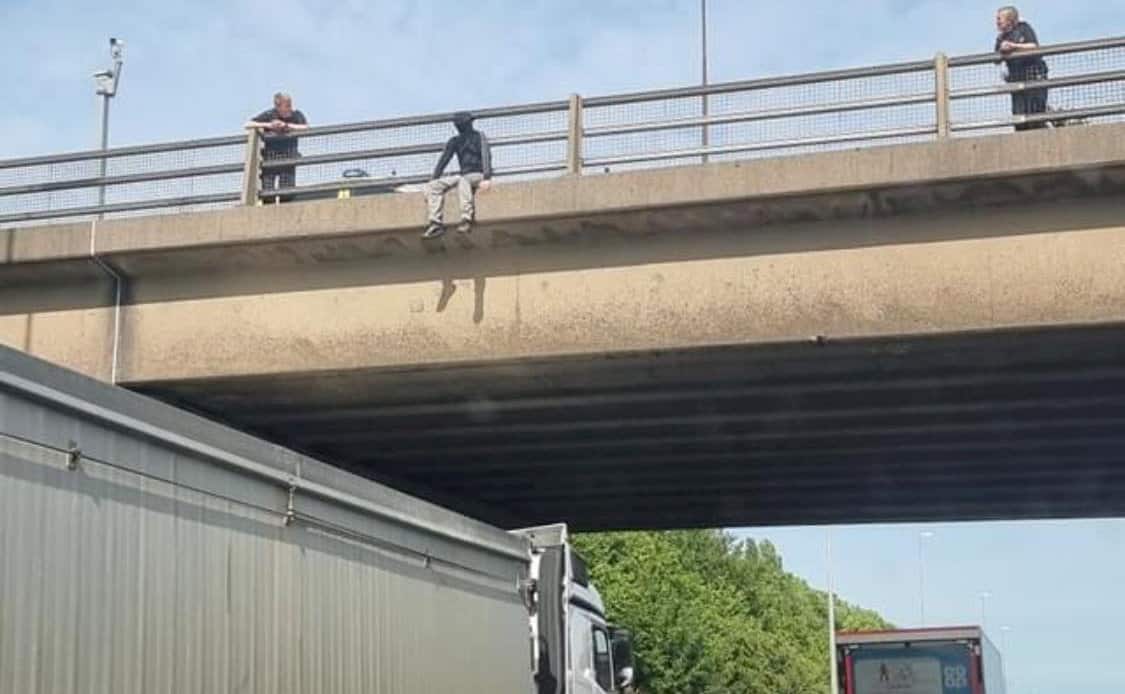 This is the moment a hero trucker parked his lorry underneath a motorway bridge to try and save a distressed man threatening to jump.

Tom Birkett, 35, was driving on the M62 near Warrington, Cheshire, last week when he spotted someone sitting on the edge of a bridge with their legs dangling over the edge.

The married dad-of-three slowed down as he approached – and managed to park his 44-tonne tipper truck directly underneath where the troubled man was sitting.

Tom’s heroic action meant the drop from the edge was only around 10ft as opposed to 25ft and that had the man jumped, his injuries would have been less serious.

His Mercedes truck was also fitted with a canvas over the tipper, providing it with a soft top and essentially creating a net for the man to fall into, although luckily it was not needed.

Tom, from Kendal, Cumbria, said: “I was coming up to bridge when I clocked there were three people on it.

“As I got closer I could see that the lad was sat on the wrong side of the barrier.

“I thought, ‘I’m going to have to do something here, this lad’s going to jump off.”

Tom then put his hazard lights on and began weaving his truck in order to notify other motorists there was a problem ahead.

He added: “I don’t know what clicked in my head but it suddenly dawned on me that I could help.

“I lined the truck up with the lad so the front of the trailer was underneath him.”

When Tom arrived, on June 8, police were already on the scene, including two officers on the bridge who were speaking to the man, thought to be in his 20s.

A short time later, a negotiator arrived and, according to Tom, spent around 45 mins talking to the man before he brought himself to safety.

Tom said the entire ordeal lasted around two hours and that he was watching on from a barrier at the side of the road.

He added: “I can’t speak highly enough of how well the police did, they were fantastic. The negotiator did a phenomenal job too.

“I think what I did has been blown out of proportion, the police are the real heroes here.”

After watching the distressed man get ushered away by police, Tom was allowed to return to his truck and continue his journey.

He said: “I hope that other drivers see this and know it’s an option.”

A charity called Vulnerable Citizen Support Leeds posted an image showing the man sitting on the edge of the bridge on social media.

A spokesman said: “This post is to raise that awareness that it’s okay not to be okay and you can or should speak out.”