The world’s cheekiest jobseeker wrote a letter to a company boss because he knew the role was free after an employee died – and even included the DEATH CERTIFICATE. In a letter to an agricultural company, the applicant for the job of technical manager claimed he had even attended the funeral to “be sure […]

by Clair Hart
in Must Reads, Weird News 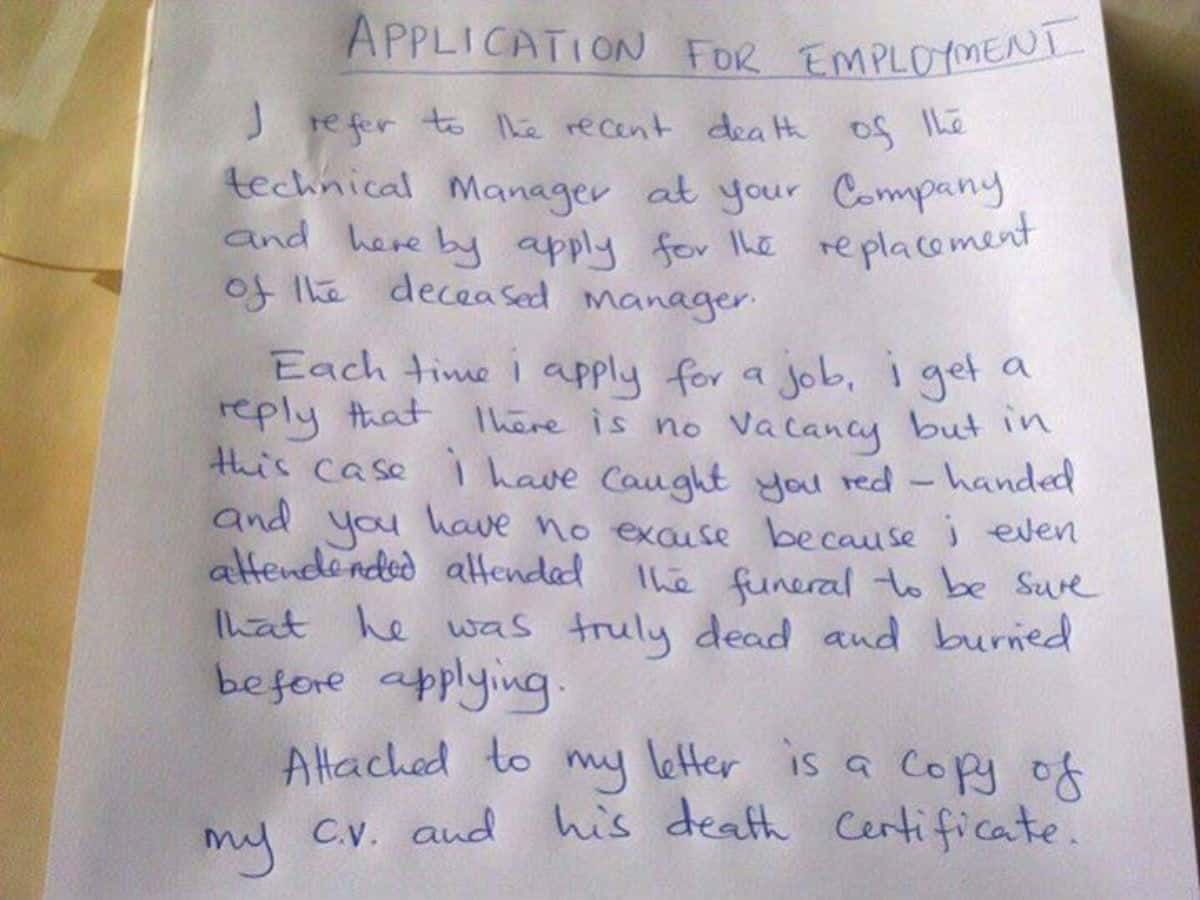 The world’s cheekiest jobseeker wrote a letter to a company boss because he knew the role was free after an employee died – and even included the DEATH CERTIFICATE.

In a letter to an agricultural company, the applicant for the job of technical manager claimed he had even attended the funeral to “be sure he was truly dead and buried”.

Attached to the hand written letter was the applicants CV and even a copy of the deceased technical manager’s death certificate.

The desperate applicant has written eight letters to the company, who say the man has sent an expression of interest every three months for the last two years to the UK-based agricultural company in tropical Papua New Guinea.

The letter read: “I refer to the recent death of the technical manager at your company and hereby apply for the replacement of the deceased manager.

“Each time I apply for a job I get a reply that there is no vacancy but in this case I have caught you red-handed and you have no excuse because I even attended the funeral to be sure that he was truly dead and buried before applying.

“Attached to my letter is a copy of my CV and his death certificate.”

Human resources manager Peter McLean, 62, interviewed the cheeky applicant but was told he could not be offered the job in because he lacked experience.

Instead the applicant argued the company promote employees to make space for him and then demote him if he’s not good enough.

The company, who employ thousands worldwide, have offices in London and Liverpool as well as their headquarters in New Britain, Papua New Guinea.

Across Australasia they manage over 100,000 hectares of sugar cane, grazing pasture and twelve oil mills.

When Peter refused the applicant became frustrated and walked out, but the company expect he will continue to bombard them with letters.

Peter said: “He was very determined and really wants to work for the company.

“Every three months he sends in an ‘expression of interest’ but never an application for a vacancy.

“This time he applied for a vacant position so I interviewed him.

“He did not have the minimum qualifications nor anywhere near the experience of performing at the level we needed.

“He basically said ‘give me the job and if I am not good enough you can demote me’.

“I explained why I couldn’t hire him for this job and that we had people in our talent pool that were more suited.

“He just said okay, promote them and i’ll do their job.

“He was not taking no for an answer and kept his bombardment up.

“Then he saw he was not getting anywhere except annoying everyone, in particular me.

“He then apologised and said he decided he does not want to work for us now and just stood up and walked out.

“Hopefully I will not see him again, probably not for another three months.