“I thought we had moved on from these kinds of things." 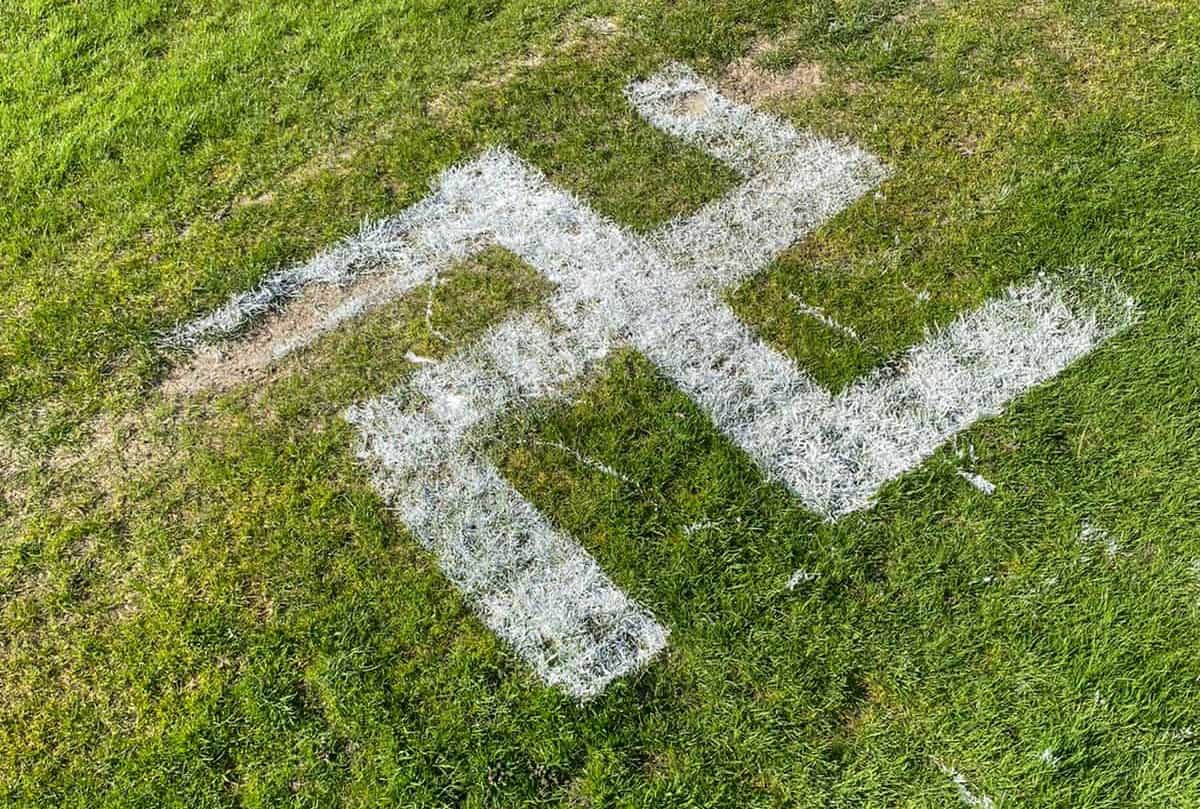 A giant Nazi swastika was painted across a football pitch by mindless vandals Credit;SWNS

A giant Nazi swastika was painted across a football clubs pitch by mindless vandals.

The offensive symbol was discovered on Erith & Belvedere FC’s stadium in Kent on Monday morning.

Paint and rollers had been left out overnight as the non-league team was in the process of renovating their ground.

But when Joe Bingham, a gym trainer who uses the facilities for his online lessons, arrived the next morning, he discovered they had been used to paint a giant swastika on the pitch.

The vandals also tried to paint a Nazi symbol on the concrete floor, used as an outdoor seating area during games, and splattered a couple of the club’s benches.

The club’s director, Paul Springett, says he is not concerned about the damage, but is “deeply shocked” about the symbolic nature of the vandalism.

Mr Springett said: “You sometimes go into a pub toilet and someone’s written something childish on the wall, but this is more than that.

“Here, someone has actually gone out of their way to jump the gate, pick up a roller and paint a Nazi sign in the middle of the bloody football pitch.

“I am not bothered about the vandalism, it is the message and the symbol and what it’s all about, it is not nice to see.

“I thought we had moved on from these kinds of things, now that we live in a prosperous and peaceful world.

“I haven’t seen a nazi sign for years – it’s just awful, I can’t get my head around someone doing this.

“Someone said it could just be kids being kids, but then what kind of kids are we raising?”

It is the second act of vandalism against a non-league football club to happen in the area over the past few weeks.

Lordswood Football Club, 25 miles away, saw its goals and score boards damaged after vandals broke in on March 2.

Mr Springett said: “The roller and the paint was there as part of our major renovation works, we left it out and never expected anyone to come in and steal it and certainly not do what they have done.

“You try and move so far away from these sorts of things happening and it is just disgusting really.”

The 40-year-old is one of four people to have recently taken over the running of the club.

While Erith & Belvedere FC have been using the grounds for the past year, it is the first time something like this has happened.

Mr Springett said: “You do see some of these things happening in the news but when it happens to your club, or happens to you, it touches home a little bit more.

“We do so much on diversity at our club, we are big mental health champions, we try and help the NHS as much as we can, we have a multicultural team.

“We are meant to be playing an inter-team game there soon but I don’t want to until we can get rid of the swastika sign.

“It is not nice for players to see.

“We tweeted it to let people know that this kind of mindless stuff is going on.

“It seems to be a little bit more than just kids breaking in, that is the disturbing thing.

“Losing the money (to pay for the damage) is neither here or there, it is just that message, it is not very nice.”

Welling United, who play in National League South and share the ground, might have also suffered some damage to their dugout area.

The incident was captured on CCTV which has now been handed over to the police.