A great-gran bagged herself a private gig with her favourite band G4 after hitting her head on a pavement – just six FOOT away from their concert doors. Marjorie Everett, 75, had won a Facebook competition to see G4 so she could see the quartet live for the very first time. But she would never […] 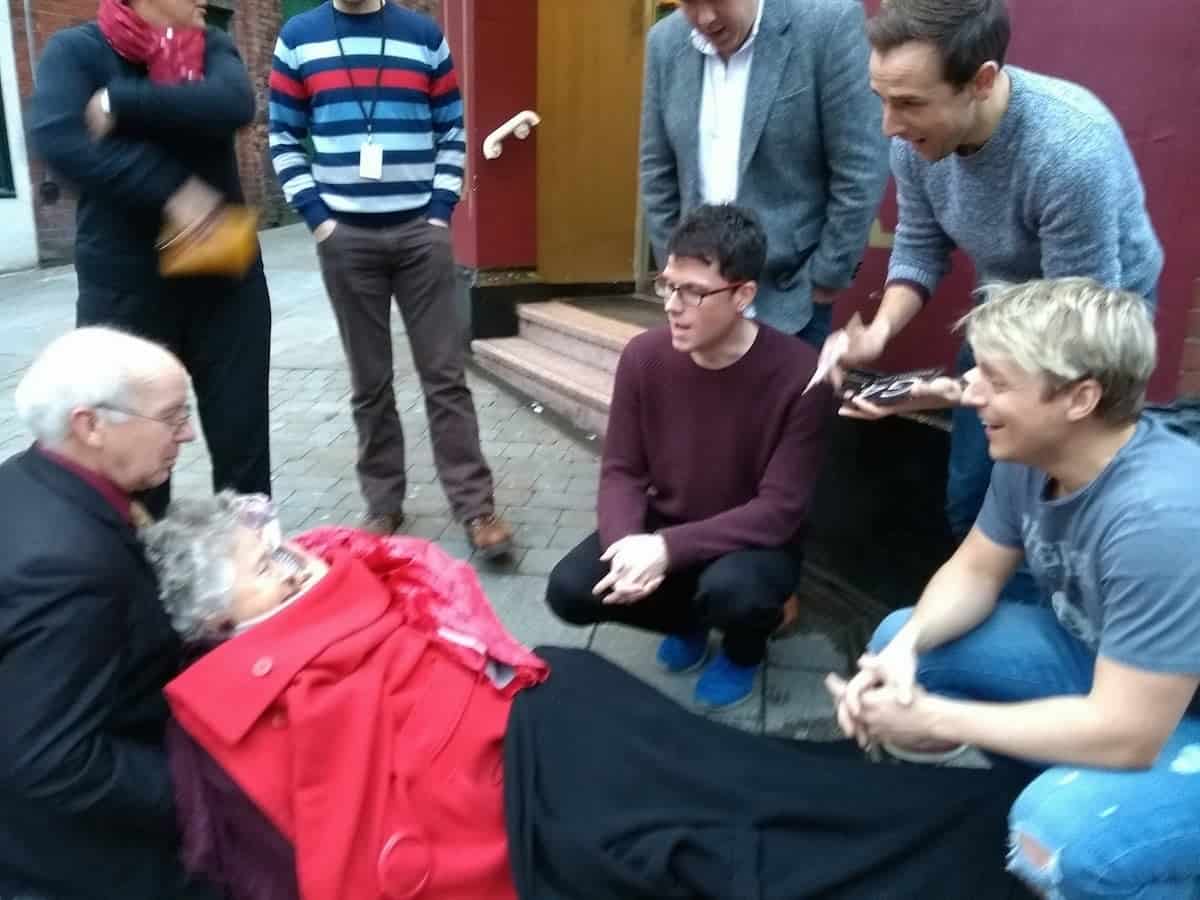 A great-gran bagged herself a private gig with her favourite band G4 after hitting her head on a pavement – just six FOOT away from their concert doors.

Marjorie Everett, 75, had won a Facebook competition to see G4 so she could see the quartet live for the very first time.

But she would never have guessed her first concert would be on the steps of New Theatre Royal in Lincoln while she was dazed and confused after tripping over.

The great-gran-of-one Marjorie was comforted by husband Peter Everett, also 75, as he wrapped her in blankets and G4 merchandise while she laid on the floor.

However, while she waited the band appeared for a pavement performance and sang for the couple while they waited for an ambulance.

Charity worker Marjorie, of Welton, near Lincoln, said: “I heard the clock tower chiming for quarter past six and I was just about to say that we were on time.

“But as I turned around and had fallen down on my left hand side.

“I’ve got a great big purple eye to remember it by – the rest was just a blur.

“All I know is that they asked: ‘I know you are not going to be able to see us this evening, so would you mind if we sing to you?’

“I didn’t find it embarrassing at all – I should have said something like I’m not going anywhere am I.

“It was all a bit of a so-real moment – and I’m glad we have the video which Peter gave his phone to a staff member to film.”

Marjorie, who had fallen in church six weeks previously, says her foot clipped a drainage indent in the pavement as she tumbled to the ground on Monday evening (March 19).

Staff came flooding out of the venue and piled coats and blankets and merchandise on top of Marjorie to keep her warm.

But then out popped the G4 troupe who blasted out an impromptu performance while she was on the floor after asking if they could sing for her.

The boys belted out Elvis’ ‘Can’t Help Falling In Love’ to her before the ambulance arrived within 40 minutes.

The paramedics managed to take Marjorie to Lincoln hospital for a check up and arrived back at home at 5am the next day.

Marjorie and Peter, who have two children, two grandchildren and one great-granddaughter, described the evening as ‘surreal’.

“It was quite emotionally really,” said retired market and sales manager Peter.

Adding: “They asked if they could sing to us and it was just all surreal.

“People thought it was a performance, and members of the public were just walking around us as G4 sang, they then stopped and probably wondered what was going on.

“They were almost unrecognisable because they were not wearing their suits and just in their casual clothes.

“It was actually quite emotional at this point, when you’re sat so close to they four men in the harmony together – it was beautiful.”

The pair were later contacted by G4 to join them for a meet and greet and concert at Durham Cathedral at Christmas.

But Marjorie couldn’t wait that long to see her now “favourite artist” and has bought tickets to see the boys when they visit Skegness, Lincs., in September.

“They’re wrapping me up in cotton-wool until then,” Marjorie added.

The band, who were X-factor runners up in 2004, have since stated that they intend to “spoil” the great-gran when they next see her.