Ed Pratt, who has peddled 18,000 miles across four continents on one wheel, has today (Thur) begun the final 500 miles of his three-year journey. 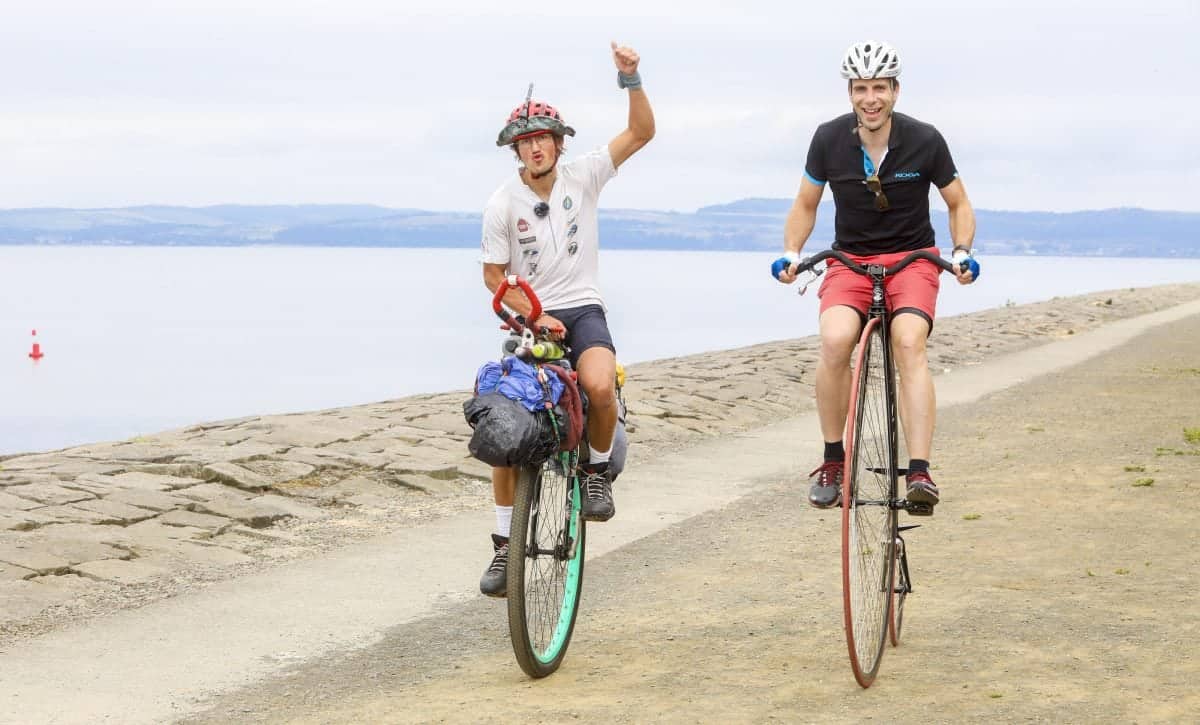 The first person to travel around the world on a unicycle will be joined by cycling champ Mark Beaumont as he starts his final leg.

Ed Pratt, who has peddled 18,000 miles across four continents on one wheel, has today (Thur) begun the final 500 miles of his three-year journey.

The 22-year-old was joint by record-breaking Scot cyclist Mark Beaumont as he left Edinburgh and headed for Chilthorne Domer, Somerset.

Beaumont, pedalled out on his Penny Farthing from Newhaven Lighthouse, Edinburgh, with Ed today and will stick with him along the coast to Gullane, East Lothian.

This year Beaumont broke the British record for the distance ridden on a Penny Farthing in one hour but was 290 yards short of the world record.

Speaking of Ed’s treck around the globe said: “It’s incredible. 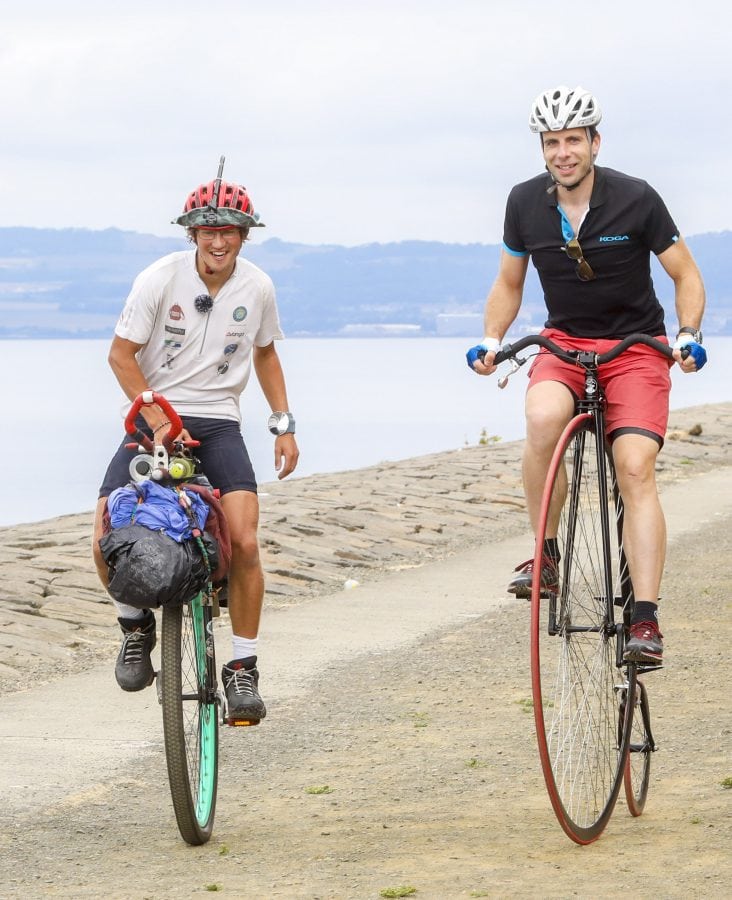 “He has got quite a global following for this incredible journey.

“We had a quick chat in the outback of Australia and here we are.

“It’s great to be able to welcome him back to the UK and see him off on his final stint down home.

“I had a quick go sitting on his unicycle yesterday and I cannot get my head around it.

“It just doesn’t make sense the physics of it and then you pile all that kit on top. It’s quite incredible.

“Quite a lot of people have made the effort to be here today and so we’re going to have fun.

“We are going to ride down the coast.”

Ed, who was joined by around 20 other cyclists, has 16 days to travel from Edinburgh to Somerset.

He said: “We’re currently in Newhaven and I decided to start at its lighthouse because I thought it would be nice as a starting point. 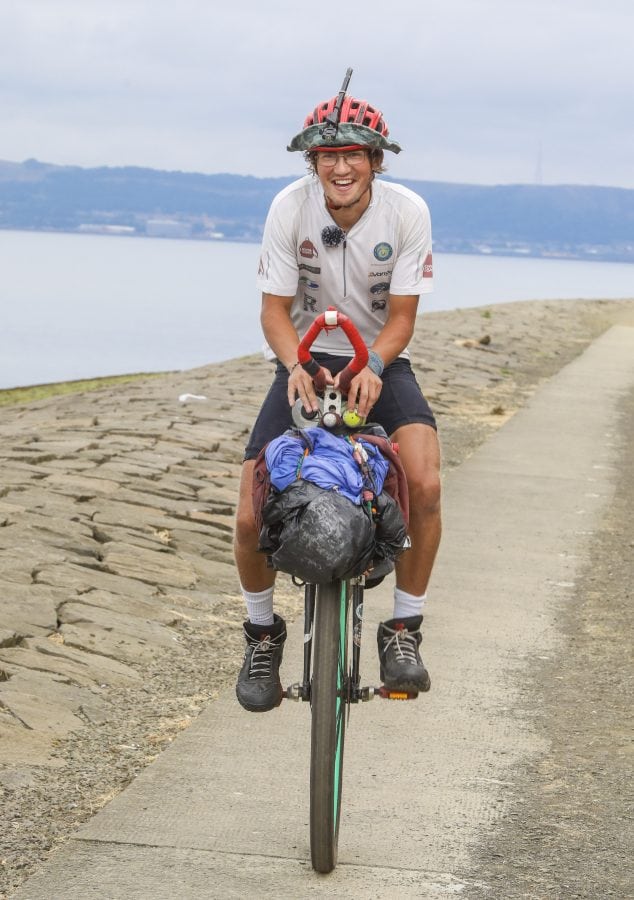 “I have about 20 cyclists joining me for the first few miles so it’s an exciting day.”

The unicyclist from Curry Rivel, Somerset, set off on his global adventure more than three years ago and has unicycled across Europe, East Asia, Australia and the USA.

During one perilous journey in Kazakhstan, he had to push his unicycle 50 miles on foot along the unforgiving Mukur Road.

And in 2015, just eight months into his three-year journey, he was almost crushed by a skidding car in Aktobe, Kazakhstan.

He then spent six months away from the saddle, seeking sanctuary in nearby Kyrgyzstan.

He completed his global adventure cycling across the USA and finishing in New Jersey on July 4.

Ed’s massive feat has seen him raise £20,000 for the charity School in a Bag, which provides school equipment to vulnerable and disaster-affected children.

“I started from the Golden Gate Bridge in San Francisco five months ago – 4,000 miles and sore bum later and I’ve finally rolled into New York.

“I know it seems like it’s just me out there sometimes, but without your support I know my crossing of the States would have been nowhere near as enjoyable.” 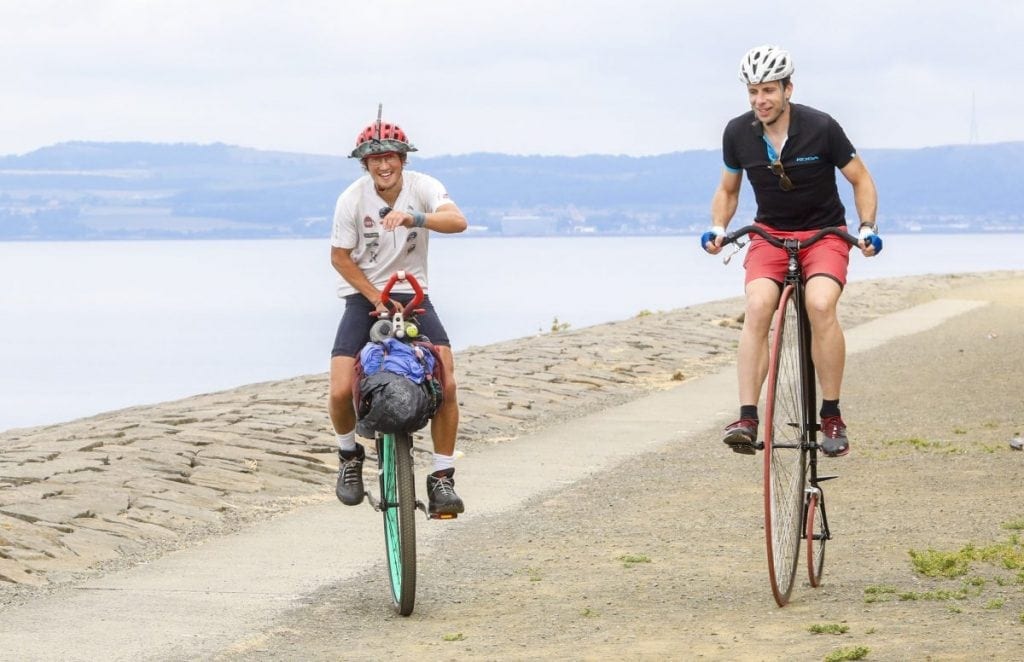 On his Facebook page he wrote: “I’m pretty pumped to be riding my final 500miles on home turf and can’t wait to meet lots of you on my travels back home to Somerset.”

Ed, who has cycled across San Francisco, Las Vegas, Dallas and Washington in the past four months, has spent most of the past three years camping around the world.

He has carried a sleeping bag, tent, cooking stove, clothes and supplies in two panniers attached to his unicycle.