A campaigning farmer is demanding the terms “pig-out” and “eat like a pig” are removed from the dictionary – claiming they’re unfair and offensive to the animals. Fergus Howie, 43, has written to the Oxford English Dictionary to demand that the “derogatory” terms are removed or redefined. The term “pig-out” is defined as “a bout […] 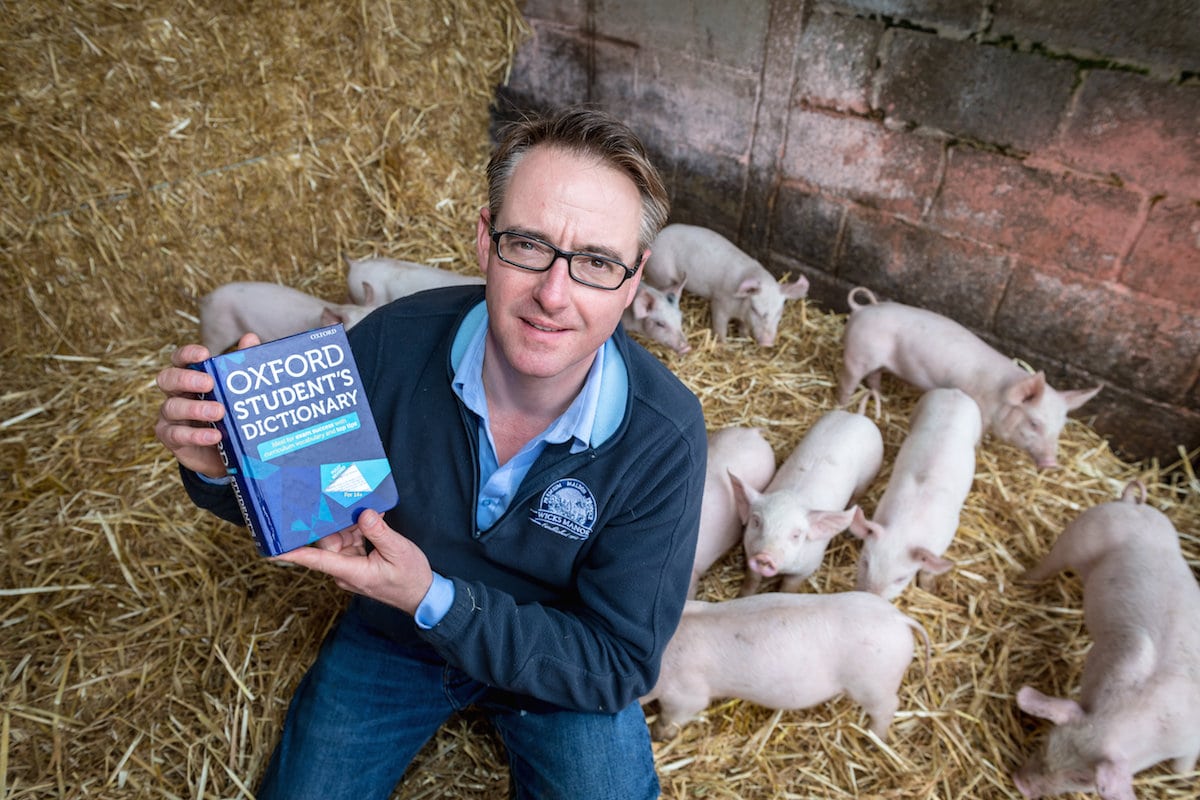 A campaigning farmer is demanding the terms “pig-out” and “eat like a pig” are removed from the dictionary – claiming they’re unfair and offensive to the animals.

Fergus Howie, 43, has written to the Oxford English Dictionary to demand that the “derogatory” terms are removed or redefined.

The term “pig-out” is defined as “a bout of eating a large amount of food e.g ‘a junk food pig-out'”.

But he says that despite the stereotype, pigs are no greedier than any other animals.

Dad-of-three Fergus said: “The fact that they associate junk food with pigs is not very good.

“Pigs don’t eat junk food and they are nothing to do with that.

“As a pig farmer and on behalf of the country’s pigs, we are just a little upset by the fact that people talk about ‘eating like a pig’ it is derogatory.

“It creates this perception that pork is a fatty meat which is completely incorrect.

“And this is what has prompted me to get frustrated that fact that people are calling pigs fat because they are not.”

The Agriculture and Horticulture Development Board (AHDB) last week announced that pigs are today leaner than they have ever been.

Fergus runs his family farming business Wicks Manor Farm, near Maldon, Essex, and has done so since 2000 after taking over from his father who starting farming in 1967.

He states that the these derogatory terms only relate back to the 19th century and do not define a pig.

Fergus, who farms with his wife Vanessa, added: “I would like to request that derogatory porcine terms such as ‘pig-out’, ‘eat like a pig’ or ‘porker’ are redefined within the Oxford English Dictionary.

“It has long been a bugbear of mine that people use porcine terminology to describe over consumption, especially when it comes to food.

“Pigs are now 44 per cent leaner as they were in the 1970s and within that same period of time the human has got fatter by 30 per cent.

“It is rather unfair when we talk about pigging out, we think of a pig and not really ourselves.

“In the 19th century pigs were bread as fat.

“We needed an animal which was a large producing animal and the requirements for lubricants, fat and lard was used for that.

“But the requirement now is large muscle, good conformity of a pig carcass without too much fat on it.

“Genetic wise and bread wise it is a completely different animal which is being farmed in the UK.”

Fergus points out that ninety per cent of people like the taste of pork but only thirty per cent buy it every week because people have this perception that it is fat.

Fergus said: “For a mid week meal pork is a fantastic meal and people don’t buy it.

“In actual fact a chicken breasts has got more fat in it than a Pork Madeline.

“There is 0.17 grams of saturated fat in a Pork Madeline compared to a skinless chicken breast, which has 0.2 grams.

“The fact that the English dictionary has got the term ‘pig-out’ makes it derogatory to pigs and pig farmers and we want to change that because it is changing peoples perceptions of pork.

“And so it is this this kind of perception of a pig which is not good for the sales.

“Speaking on behalf of all pig farmers pork is a very, very lean meat and it hasn’t got the fat on it that it used to have one hundred years ago.

A pigs diet is wheat and barley and it is a legal requirement run by the Red Tractor Farm Assurance that it is all tested.

Fergus grows his own wheat and barley on his farm where everything is tested and their diets have been made up by a nutritionist.

Fergus added: “Our pigs have a balanced diet and depending on what stage of life the pig is on the ration will vary.

“We make sure they are having the right amount for their energy levels and protein to be able to grow and not be restricted.

“But we also not providing them with so much that they do grow fat.

“All our pigs have constant access to the outdoors which allows plenty of space for them so they can exercise.

There has been a huge change in the UK’s farming methods and agriculture also all British pigs are Red Tractor Far assured.

The environment has changed and pigs need to have more space in the pens to show there natural behaviour.

Fergus adds: “There breeds have changed.

“Over the last hundred years we have been using animals which grow really fast, have good muscle structure, have good growth without too much fat.

“Within those breeds we have selected the best animals which aren’t fat.

“We have managed to knock forty-four per cent of fat content from a pig and within the same.

“We use those as the breeding stock so they don’t have the proximity to grow fat.”

Carrie Ruxton, dietitian and nutritionist says; “Pork is often perceived as having a higher fat content than other meats.

“But pork medallions offer a tasty and healthy alternative to chicken breasts which can get a bit dull after a while.

“As well as being high in protein, pork is rich in B vitamins which support normal energy release and fight tiredness and fatigue.”

Fergus has been married to Vanessa for 17 years he met her at university whilst he was studying Agricultural Business management.

A spokesperson from the Oxford English Dictionary said: “We would encourage Mr Howie to visit the ‘How our Dictionaries are created’ page of our website which explains how terms come to be included in the dictionary, and what would need to happen in terms of language usage for them to be updated.”