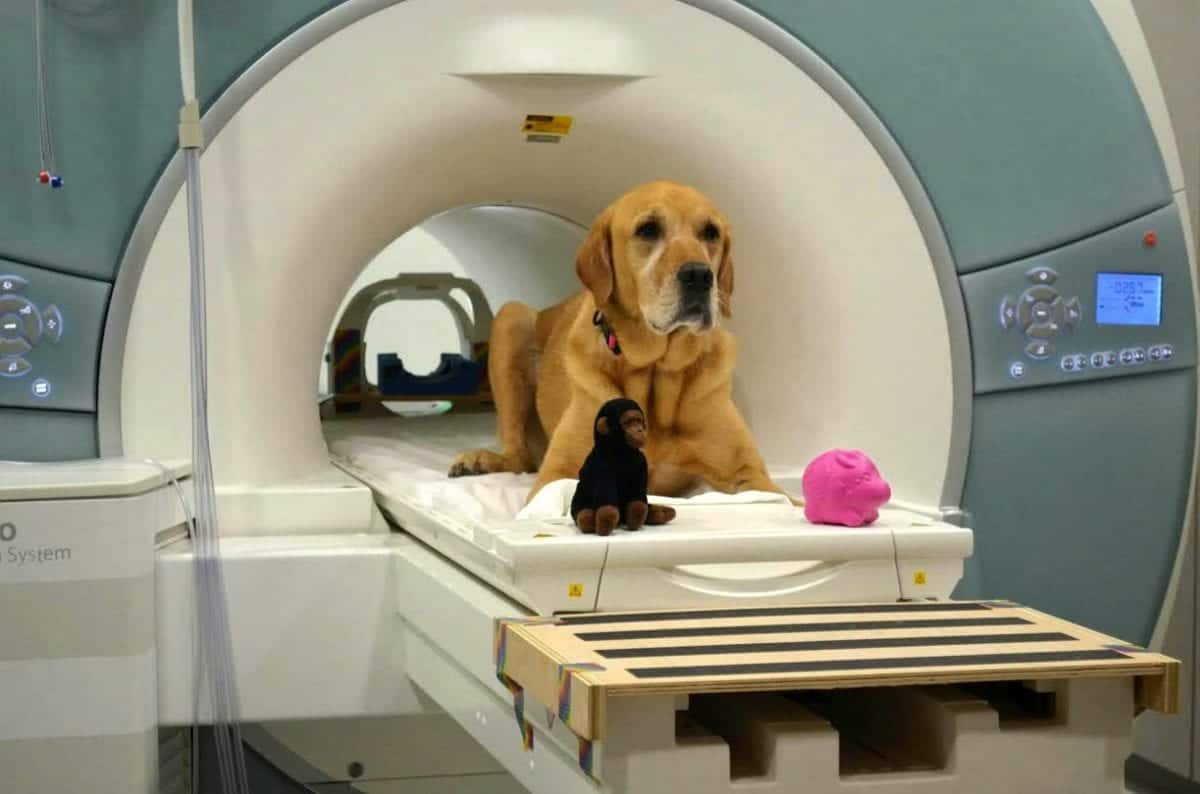 Dogs really can understand language…. just like their owners say, according to new research.

They even process the spoken word in a similar way to humans – and in the same area of the brain, say scientists.

It sheds light on why man’s best friend gets excited when we say ‘walk’ – or responds to an affectionate tone of voice.

But how this happens has remained largely a mystery – until now.

A dozen dogs were trained to lie in an MRI scanner so their grey matter could be monitored as toys were held aloft.

Different areas of the brain lit up when the US team either used the correct words to describe them – or spoke gibberish.

“But they appear to have a neural representation for the meaning of words they have been taught, beyond just a low-level Pavlovian response.”

This is a conditioned or predictable reaction named after a Russian physiologist who discovered it.

The study published in Frontiers in Neuroscience shows for the first time our canine companions have at least a rudimentary neural representation of the meaning of words they have been taught.

First author Ashley Prichard, a PhD candidate in Prof Bern’s psychology lab, said: “Many dog owners think their dogs know what some words mean, but there really isn’t much scientific evidence to support that.

“We wanted to get data from the dogs themselves – not just owner reports.”

The researchers focused on questions surrounding the brain mechanisms dogs use when a human speaks – or even what constitutes a word to them.

Senior author Prof Berns said: “We know dogs have the capacity to process at least some aspects of human language since they can learn to follow verbal commands,”

“Previous research, however, suggests dogs may rely on many other cues to follow a verbal command such as gaze, gestures and even emotional expressions from their owners.”

He is founder of the Dog Project, which is researching evolutionary questions surrounding man’s best, and oldest friend.

The project was the first to train dogs to voluntarily enter a functional magnetic resonance imaging (fMRI) scanner and remain motionless, without restraint or sedation.

Prof Berns says the brain of a medium-size dog, like a labrador, is about the size of a lemon.

His inspiration was the mission that killed Osama Bin Laden, in which a military dog jumped out of a helicopters.

He says: “That was my epiphany. If a dog can be trained to jump out of a helicopter, certainly we can train a dog to go in an MRI.”

The team has already furthered our understanding of dogs’ neural response to expected reward, identified specialised areas in their brain for processing faces and demonstrated olfactory responses to odours.

In the latest study the owners of 12 dogs of varying breeds were trained for months to retrieve two different textured objects – on hearing their name.

One, such as a stuffed animal, would be soft, and the other harder and made out of rubber, to facilitate discrimination.

After fetching them, the animals were rewarded with food or praise.

Once success was consistently achieved, the dog lay in the scanning machine as the owner stood at the opening and said the names of the toys at set intervals, then showed them to it.

Eddie, a golden retriever-Labrador, for instance, heard “Piggy” or “Monkey,” before the matching toy was held up.

As a control, the owner then spoke gibberish, such as “bobbu” and “bodmick,” then held up novel objects like a hat or a doll.

The results showed greater activation in auditory regions of the brain to the new ‘pseudowords’, relative to the trained words.

“What is surprising is the result is opposite to that of research on humans – people typically show greater neural activation for known words than novel words.”

The researchers say the dogs may show greater neural activation to a novel word because they sense their owners want them to understand what they are saying, and they are trying to do so.

Half of the dogs in the experiment showed the increased activation for the novel words in their parietotemporal cortex.

This is an area believed to be similar to the angular gyrus in humans, where vocabulary is processed.

But the others showed heightened activity to novel words in other brain regions including parts of the left temporal cortex and amygdala, caudate nucleus and the thalamus.

Prof Berns said this could be linked to the range in breeds and sizes of the dogs, as well as possible variations in their abilities.

A major challenge in mapping dogs’ cognitive processes is the difference in the size of their brains.

A chihuahua’s is much smaller than a Great Dane’s.

The study also does not mean spoken words are the most effective way for an owner to communicate with a dog.

In fact, other recent research by the same team showed the neural reward system of dogs is more attuned to visual and scent cues, than verbal ones.

Added Mr Prichard: “When people want to teach their dog a trick, they often use a verbal command because that is what we humans prefer.

“From the dog’s perspective, however, a visual command might be more effective, helping the dog learn the trick faster.”

‘Cause for concern’ with dangerously cold weather on the horizon