A middle-aged couple who first met during a French exchange trip as children have got married – 41 YEARS later. Emma van Laun admits she “developed a crush” on Vincent Valbret when he travelled to her village in the summer of 1976. At the end of his trip, Vincent, who was 15, asked the 11-year-old […]

by Jess Young
in Must Reads, Relationships 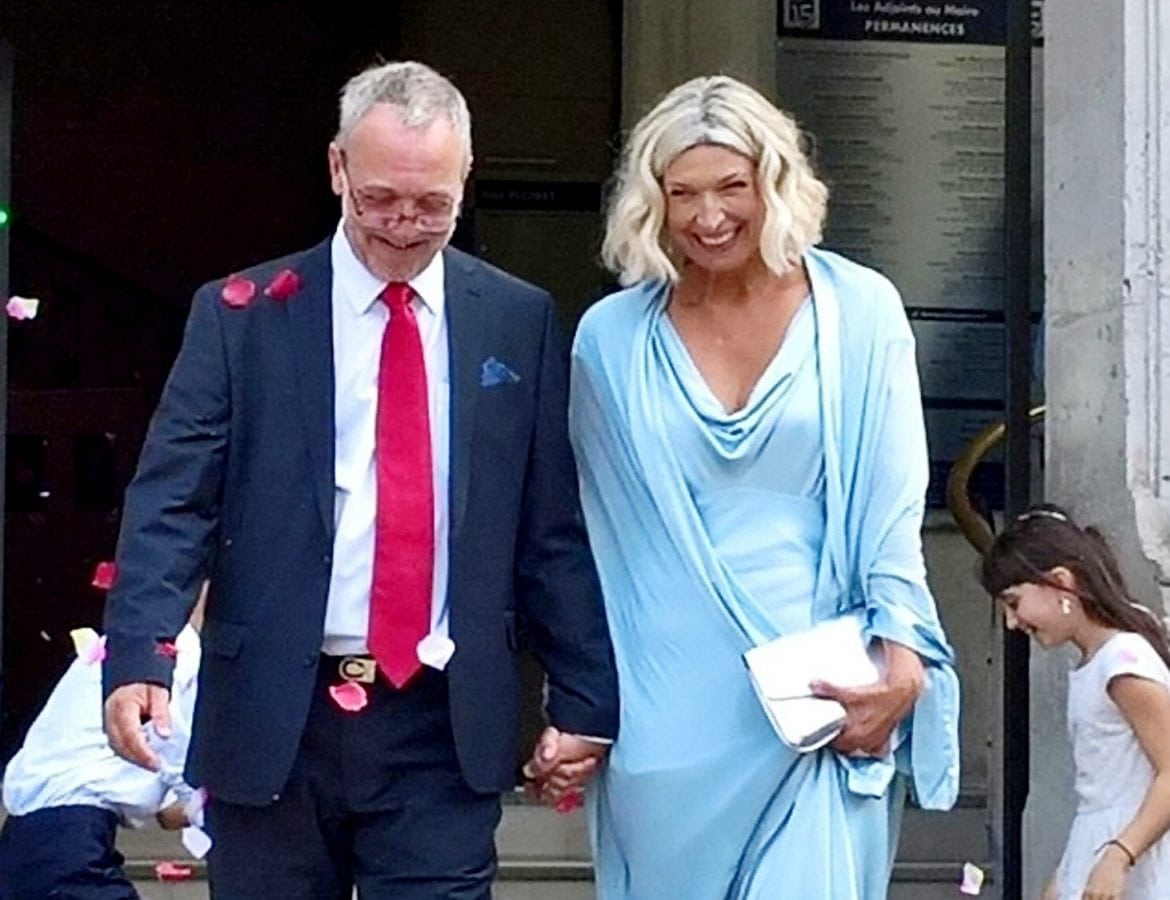 Emma van Laun, 52, and Vincent Valbret, 56, on their wedding day. A couple who first met on a summer holiday as children, but lost contact and married other partners, finally tied the knot  40 years later. See NTI story NTIWED. Emma van Laun, 52, and Vincent Valbret, 56, met at Longtown Education Centre, Hereford., in 1976 when Vincent, from Paris, stayed there with his pen pal from Northampton. Emma, who lived at the centre which was run by her parents John and Miriam, was 11 at the time and soon developed a little crush on Vincent. He returned to the centre another two or three times and Emma became pen pals with his sister Helene, who was the same age as her. The two girls had an exchange for the next three or four years, spending a few weeks visiting each other every summer. But when Emma was 16, they all went their separate ways and eventually Emma and Vincent married other partners - but their parents stayed in contact. Emma married and lived in London where she had two children, while Vincent married and had four children and lived in Paris. Emma had been divorced for ten years after a ten-year marriage and Vincent had been divorced for six years following a 15-year marriage.

A middle-aged couple who first met during a French exchange trip as children have got married – 41 YEARS later.

Emma van Laun admits she “developed a crush” on Vincent Valbret when he travelled to her village in the summer of 1976.

At the end of his trip, Vincent, who was 15, asked the 11-year-old Emma if she would like to become penpals with his sister who was the same age as her.

When Vincent returned to Paris, Emma, from Longtown, Herefordshire, wrote to both him and his sister Helene over the years before they lost touch as adults.

They both went on to marry different people with Emma having two children while Vincent had four of his own with his French wife.

But they got back in touch four years ago when Vincent phoned Emma suggesting their respective children could become penpals.

They both discovered they were both divorced and after Emma visited Vincent in France, they fell for each other.

Just months after getting together, Vincent popped the question and the couple tied the knot in a church ceremony in Paris last month.

Emma, now 52, said: “Vincent was staying in Northampton with an exchange pal and as part of his trip to England happened to come over to my village in the summer.

“My parents ran an outwards bounds centre in Herefordshire and he came over to do rock climbing and horse riding.

“I lived there and it wasn’t a very big place.

“I know Vincent didn’t really speak good English at the time and I didn’t speak much French either.

“I think it would have been an 11-year-old wandering around her home area and a 15-year-old boy far from home – we were both sort of at a loose end at the same place.

“Vincent would have helped getting ready for the next group (of students) because he’s such a generous, helpful person.

“Putting chairs out, getting things a bit ready.

“I thought he was marvellous.

“I know there we had a little sort of coffee room but it was in a quite attractive basement which had been a cellar and been dug out and was quite a nice space and there was a jukebox and a bar area to make coffees and teas and a table football.

“A jukebox in those days was pretty exciting – it wasn’t readily available.

“I know we spent a lot of time down there.

“I had a little crush on him but he definitely didn’t notice me at all.

“At the end of his stay, we had spoken a number of times and Vincent suggested that I could write to his sister, Helene, who was the same age as me.

“He came back to the centre the next year with Helene and they returned every year after that until I was 16.

“We had an exchange for the next three or four years.

“His sister and I are the same age and he is four years older than me. We lost touch when we grew up and I moved to London but our parents stayed loosely in touch.”

Emma married and lived in London where she had two daughters, while Vincent got hitched and went on to have four children of his own.

But four years ago Vincent phoned Emma asking whether her daughter, who was 15, would like to become penpals with his own son, who was the same age.

Emma, who works as a nanny, added: “Our parents had stayed in touch and Vincent had asked his father to ask my dad for my number.

“He called me out of the blue and asked how I was and whether my daughter would like to write to his son because they were both 15.

“He said it would a second generation exchange and I thought it was a wonderful idea.

“I took my daughters out to Paris for the weekend and when we met again after so many years it just went from there.

“Vincent and I met again and of course, fall in love.

“Two years later I moved to Paris and two years after that we married.”

They tied the knot at La Mairie in the fifteenth Arrondissement of Paris on August 26.