A police officer has been sacked after “controlling” two girlfriends – including banning talking to men at the gym, delivery drivers and using red nail polish and LEGGINGS. PC Wayne Hodge, 38, closely monitored his lovers’ movements and became jealous if he saw them around other men, He banned one ex – referred to as […] 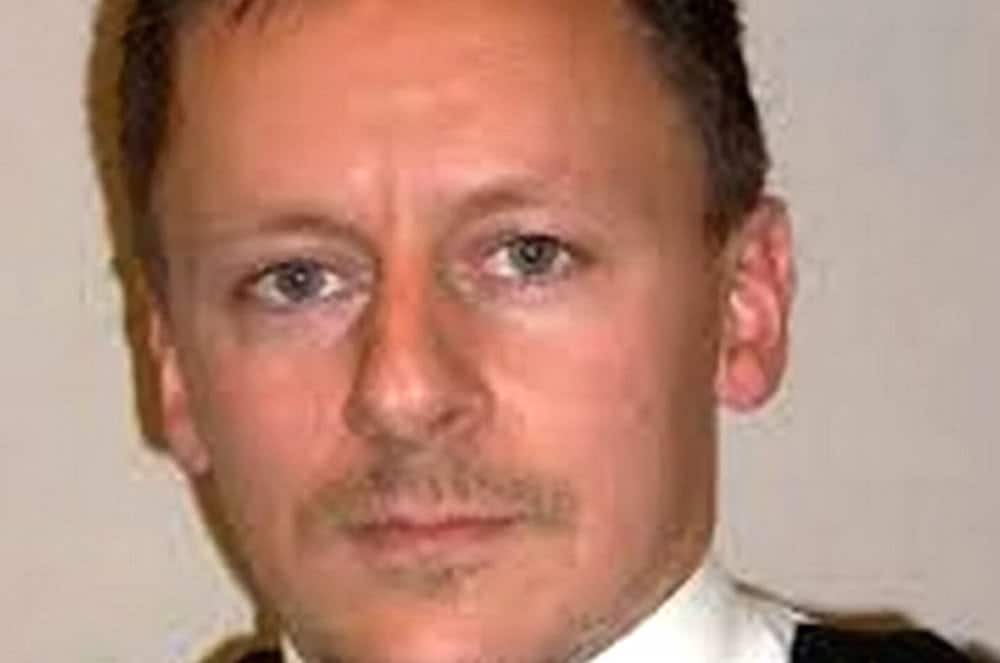 A police officer has been sacked after “controlling” two girlfriends – including banning talking to men at the gym, delivery drivers and using red nail polish and LEGGINGS.

PC Wayne Hodge, 38, closely monitored his lovers’ movements and became jealous if he saw them around other men,

He banned one ex – referred to as Ms T – from filling up her water-bottle at the gym because she would have to encounter men at the fountain.

Hodge would regularly restrict her movements to avoid male contact at all, a disciplinary panel was told.

Ms T was also banned from having Tesco deliveries if he wasn’t at the house and used his police powers to find out who sent her flowers.

She was even told she couldn’t paint her nails red claiming it ‘gave men the wrong idea.’

Hodge’s current fiancée, a fellow police worker referred to as Ms D, was barred from using the unisex changing rooms at the station they were based at.

A friend of Ms T tipped off his bosses at Avon and Somerset Constabulary and he was suspended.

But when Hodge returned to his job in January 2017 he began tracking his fiancée’s movements using the police computer system.

“He used police systems while he was on duty to check where Ms D was. He told her that a lot of his behaviour was due to anxiety.

“We do not accept there is any medical evidence to substantiate this, and that even if there was, we say it is no excuse whatsoever for his behaviour.”

Supermarket worker Ms T gave evidence at the hearing and said she was regularly called a “slut” by her partner, who would humiliate her in front of her children.

She said: “He poked me in the face once when he kicked off because my daughter had come downstairs and said a boy she was walking home with said I was hot.

“He went mental, he called me a slut and told me to get f*cked by somebody else. This was in front of my daughter as well.

“I wasn’t allowed to have my nails painted red as it would send off the wrong message to men.”

The couple shared a house for two years, but Ms T said she was only allowed to see friends on two occasions.

Even after they split up, Hodge would follow her around, and Ms T added: “There was one time when I was sitting in the car with my friend and he texted me, and when I didn’t respond straight away he drove into the car park.

“Another time I came out of the gym and he was sat in my car in his police uniform, crying.”

The jealous lover would lob plates around their kitchen in fits of rage and once smashed the bath with a brick, causing it to fall through the ceiling below, his ex said.

After a bunch of flowers was delivered to her at work, Ms T rang her boyfriend to ask if they were from him.

But he told her: “If you bring those f*cking flowers home I’ll f*cking stamp all over them.”

Dressed in his police uniform, Hodge visited a florist’s shop to demand the contact details for the man who had bought the bouquet, and then called him, lying that Ms T had been stalked in the past and was distressed.

Nearly a year later, in August 2015 he deliberately threw a mobile phone at his girlfriend.

Ms T said: “It hit me straight on – he was angry, his face was bright red, he was spitting everywhere.

When he learnt an investigation was being launched Hodge sent messages to Ms T, saying: “I’m hoping you will say you don’t know what she’s talking about.’”

He refuted the allegations in prepared statements but would not answer questions in interviews.

A panel at the police HQ in Portishead, Somerset, found he had breached standards of honesty and integrity, authority respect and courtesy, and discreditable conduct.

Chairman of the panel Michael Lock said: “We found it was an abuse of position for a police officer to obtain customer details from the florist. It was an entirely personal matter and PC Hodge was dishonest to present it otherwise.

“In relation to Ms D, all the factual allegations were supported by the text messages we had seen.

“The tone, contents and volume of the messages together with the fact they were sent during and about work satisfied us he was behaving in a controlling and coercive manner.

“It was a breach of the code to use the police system to track Ms D.”

Hodge was dismissed without notice.