He has become the oldest artist to hold the top spot. 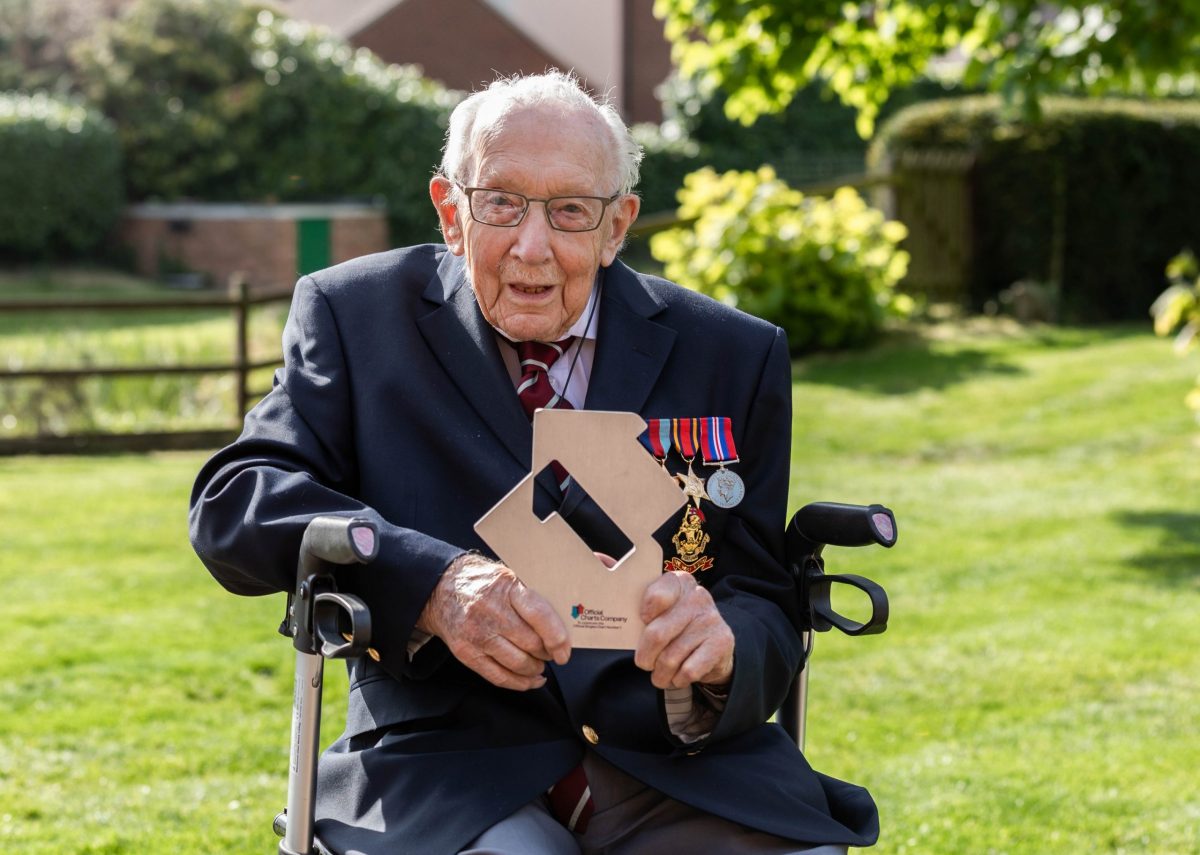 Captain Tom Moore has become the oldest artist to reach number one on the UK singles chart as his rendition of You’ll Never Walk Alone landed in the top spot in time for his 100th birthday.

The war veteran has already raised more than £28 million for the NHS by walking laps of his garden and his song, with Michael Ball and The NHS Voices Of Care Choir, is part of his continued fundraising during the coronavirus crisis.

His chart victory comes after his closest competitor, The Weeknd, asked his fans to support Captain Tom, rather than back his track Blinding Lights.

Speaking from his home in Bedfordshire, Captain Tom said: “What wonderful news to receive today, a number one single and record-breaker too – my grandchildren can’t believe I am a chart topper!

“I have to thank Michael Ball, the NHS Voices Of Care Choir and everyone behind the scenes, who shared their talents and expertise in order to raise money for the NHS, to whom we owe so much.

“And, of course, the public for buying the single and donating – we’re in this together, and I am forever grateful for your support.

You’ll Never Walk Alone is now the fastest selling single of 2020, according to the Official Charts Company, clinching the top spot with combined chart sales of 82,000 units, with The Weeknd’s Blinding Lights trailing in second place with a tally of 69,000.

Ball told OfficialCharts.com: “This is the most extraordinary thing, one of the most proudest moments of my career, but it’s not about me, it’s about Captain Tom.

“Thank you for giving him a number one on his 100th birthday. You are the best, God bless ya.”

Martin Talbot, chief executive Official Charts Company, added: “The sight of Captain Tom Moore and Michael Ball at the top of the official singles chart this week should lift everybody’s spirits in these extraordinary times.

“We are absolutely delighted to see them at the pinnacle and setting new landmarks as they go – including a record as the oldest number one singles artist of all time.

“It has been a roller coaster week, starting with a big initial lead for Captain Tom, before The Weeknd closed the gap yesterday to almost nothing – before a massive surge in the final day by Captain Tom.

“Huge thanks to The Weeknd for lending his support at the eleventh hour. But this is Captain Tom’s week – congratulations sir and happy birthday for next week. You are a hero to us all.”

At 99 years and 11 months, Captain Tom is the oldest artist to reach the top spot on the Official Singles Chart in its near 70-year history.

He will also become the first centenarian to top the charts as he will turn 100 on Thursday, while he still holds the number one spot.

The BBC’s Live Lounge Allstars charity cover of Foo Fighters song Times Like These entered the chart at number five within hours of release, while St Jhn’s Roses slipped from number two to three and Drake’s Tootsie Slide slid from third spot to fourth.

Captain Tom also broke two Guinness World Records, including for the most money raised by an individual charity walk, and as the oldest person to reach number one in the UK charts.

The individual charity walk record was previously held by Canadian athlete Terry Fox, who raised £27,201,900 (adjusted from £5.4 million according to inflation) in 1980.

“My charity walk has raised more money than I could have possibly imagined and I am so thankful to those who have donated money and bought the single so we could achieve these records together and raise money for our incredible NHS during these difficult times.

“These really are Guinness World Records titles for all of us.”

Guinness World Records editor-in-chief Craig Glenday said: “Tom’s remarkable efforts prove that age should never be a barrier to making a difference, to inspiring the nation or to breaking world records.

“The fact that this indomitable 99-year-old has achieved all three of these things makes him truly a national hero that rightly deserves his place in the history books.

“We’re proud to be able to welcome him into the Guinness World Records family.”