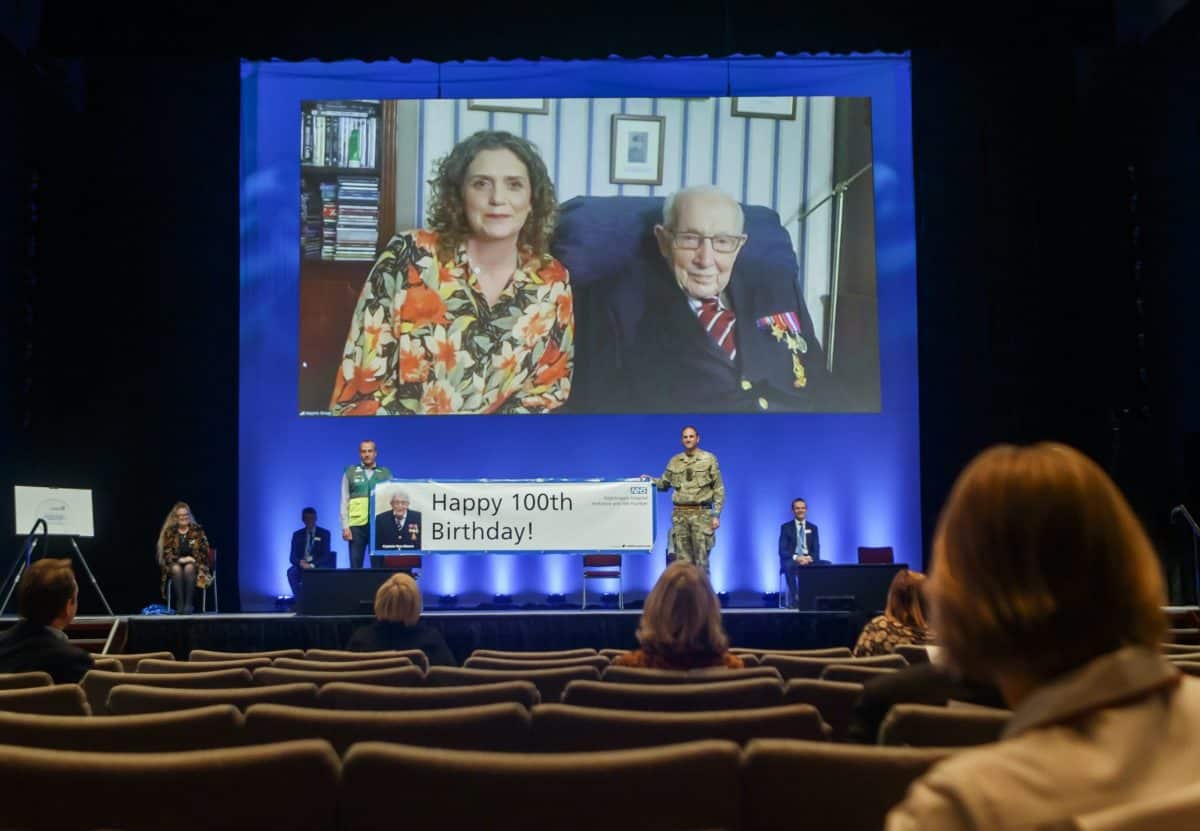 Veteran fundraiser Captain Tom Moore has thanked the NHS for doing “such a magnificent job” as he opened a new Nightingale hospital in his native Yorkshire.

The 99-year-old was guest of honour at the opening ceremony of the NHS Nightingale Hospital Yorkshire and the Humber, in Harrogate, and appeared by video link in front of a crowd of around 100 people.

The audience at the Harrogate Convention Centre gave Captain Tom, who will turn 100 later this month, a standing ovation as they wished him a happy birthday.

Sitting with his daughter, Hannah Ingram-Moore, at his home in Bedfordshire, he said: “I’m absolutely in awe of what has happened.

“If you think all the kindness of the people in this country and throughout the world, who have given so much money to the fund to help our National Health Service, which you have got to agree is one of the best services that there is in the world.”

He continued: “All the doctors and nurses in the NHS, they do a brilliant job in very difficult conditions and every day they’re putting themselves in harm’s way night and morning.

“They’re doing it with a determination that only we can do and they are continuing to do that and I think we must all say thank you very much to the National Health Service, all of you, not just the doctors and nurses, but everyone throughout the whole system who are doing such a magnificent job.”

Asked about his native Yorkshire, Captain Tom said: “I believe that there’s no place better than Yorkshire. There never has been and all the people who are missing coming to Yorkshire, they’re missing an awful lot of marvellous things and people, because the Yorkshire people have a sense of humour and kindness that not many people have, to the extent that we have.”

Captain Tom declared the hospital, which will provide 500 extra beds for Covid-19 patients, open as Paula Lorimer, director of the Harrogate Convention Centre, unveiled a plaque.

The audience, who sat spaced out throughout the auditorium, was made up of partners from different organisations who worked together to make the hospital happen, including clinical and non-clinical workers and the military.

They were asked to stand and applaud as a banner wishing Captain Tom a happy 100th birthday was held up on the stage and the veteran’s number one version of You’ll Never Walk Alone with Michael Ball was played on the screen.

Celebrities, including Yorkshire favourites James Martin, Paul Chuckle and Jodie Whittaker, also appeared in a montage, giving thanks to the Harrogate facility, which has been set up in less than three weeks.

Health Secretary Matt Hancock also delivered a recorded message in which he offered his “heartfelt thanks”.

“But the fact you have been able to make this happen in such a short period of time is a testament to your capabilities, determination and your teamwork.

“And the most important thing about NHS Nightingale in Harrogate is it is a message to everybody across Yorkshire, across the country, that whatever happens we will strain every sinew to make sure the NHS is there for anyone who needs it, from the Prime Minister, who of course needed to go to hospital with coronavirus himself, to every single person in this country.

“So far in this crisis, the NHS has always been there and with these NHS Nightingale hospitals across the country, I’m determined that it always will be.”

The extra capacity at the Harrogate hospital adds to other Nightingale hospitals being opened in London, Birmingham, Manchester, Cardiff and Glasgow.

Steve Russell, chief executive of the new hospital, called the project an “extraordinary achievement” and a “vital insurance policy which we hope will not be needed”.

He also encouraged people to keep following social distancing rules, and added: “Our doctors, nurses, therapists and other health and social care staff across Yorkshire and the Humber are working incredibly hard to make sure people get the care they need during what is the single greatest challenge in the history of the NHS, but they can’t do it alone.”