by Joe Mellor
in Broken Britain 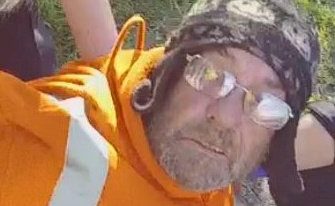 This is the moment a vile oddball was arrested after he told police he was a Covid-19 “super spreader” – before COUGHING at them.

Christopher McKendrick, 58, was stopped after members of the public reported seeing him waving a 2ft plank of wood above his head.

Police dashed to the canal towpath in Swarkestone, South Derbys., after he threatened people exercising at 3.30pm last Thursday (2/4).

But when officers approached him and asked if he had coronavirus, he replied: “I’ve already had it, I’ve got over it and now I am a super spreader so…”.

Shockingly, he then coughed in the direction of three officers before being arrested.

McKendrick, of Swarkestone, admitted common assault, possession of an offensive
weapon, assaulting an emergency worker and using threatening, abusive, insulting words or behaviour to cause harassment, alarm or distress.

He was jailed for 16 weeks and ordered to pay a £122 victim surcharge when he appeared at Southern Derbyshire Magistrates’ Court on Friday (3/4).

Inspector Chris Thornhill, of Derbyshire Police, said: “I am pleased that the courts have taken swift and decisive action in this case, my officers are on the front-line and are putting themselves at risk to protect others.

“They spoke to the arrested man to get information that would help protect them and others and did not deserve the response they got from him.”