Experts have given a warning about 'boozy wasps', who are getting drunk on fermented fruit because their normal food source has dried up - and are attacking everything they can. 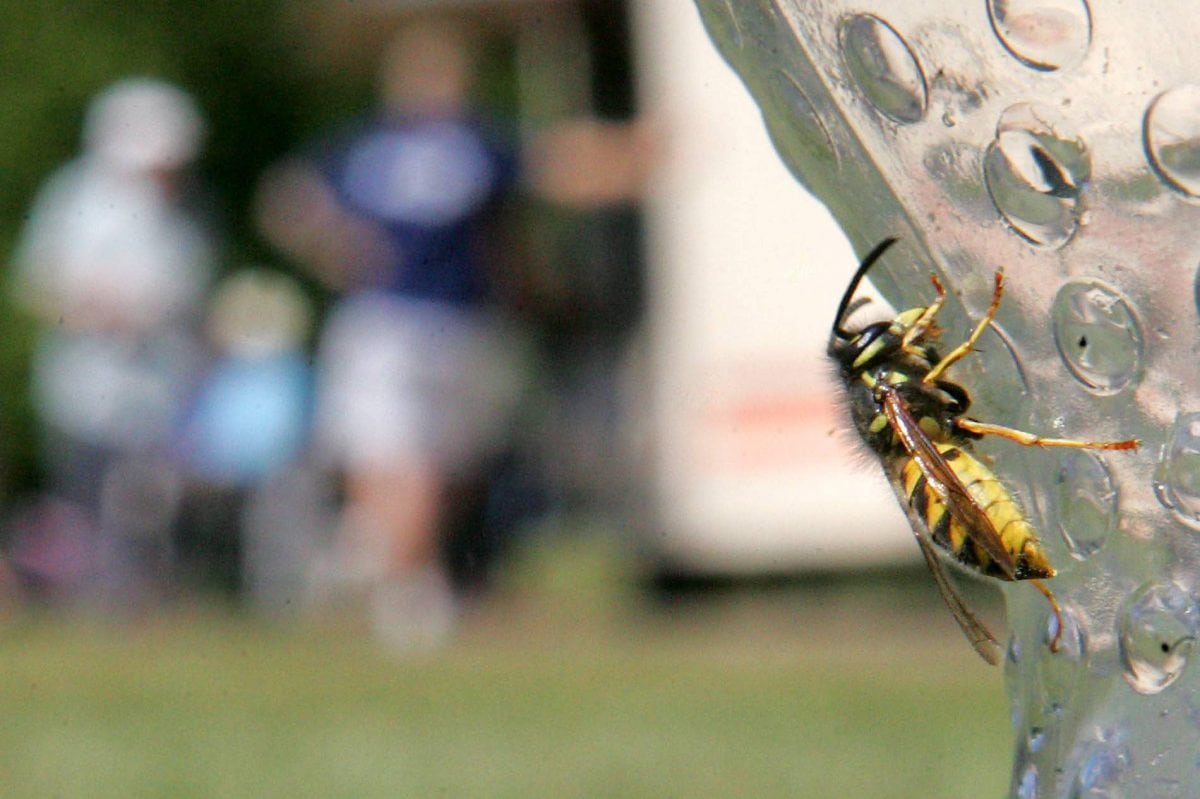 Britain is under attack from ‘lager lout’ wasps who are going on stinging rampages, experts have warned, after getting DRUNK.

Experts have given a warning about ‘boozy wasps’, who are getting drunk on fermented fruit because their normal food source has dried up – and are attacking everything they can.

The Sussex Wildlife Trust has revealed that a genetic trait in wasps’ short lives forces them to pursue booze and alcoholic decaying fruit at this time of year.

A ‘tight’ band around their abdomen stops them from eating a conventional diet of flies in later life and they become hooked on sugar.

As a result, wasps are sent into a frenzy at the height of summer, leaving desperate swarms out for the sugars of human food.

Decaying fruit and small sips of pub-garden cider has enough booze to get wasps drunk – sending them into a sting-rage.

Pest control expert Shane Jones is rushed off his feet this summer dealing with more massive wasp nests than ever before – because the wasp season started six weeks early. 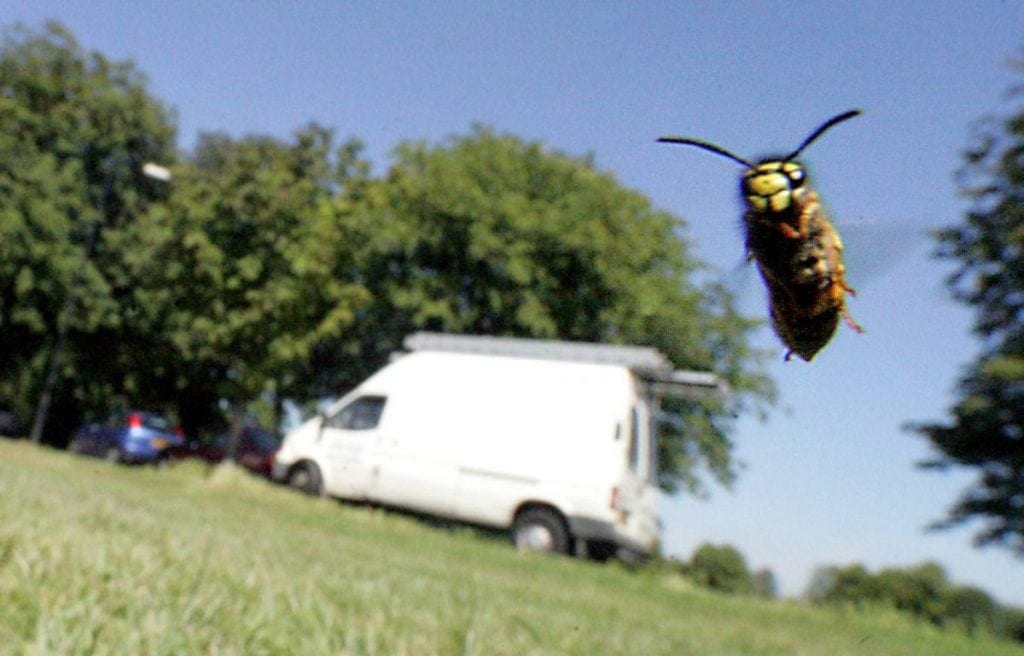 Shane, who runs Ridtek Pest Control based in Basingstoke, said: “They are really aggressive at this time of year.

“And because of the cold winter, the wasp season started about six weeks earlier.

“Wasps have built absolutely massive nests and, now that all the larvae have grown up and the queen has stopped laying eggs, the colonies have a workforce with nothing to do – and nothing to eat.

“So they go down to the pub, obviously.

“Wasps can’t handle their booze, so they get tanked-up and fighty – like lager louts.”

Starving wasps will do anything to target jam sandwiches, fruit and pints of beer.

This means much more risk of a sting, with The Sussex Wildlife Trust placing blame on the ‘nuisance conditions of late summer’, and it is thought more people are being stung this summer than normal.

A spokesperson said: “In the spring, queen wasps wake from hibernation and start to build their nest, laying eggs and raising their first brood of daughters.

“These worker wasps cannot produce fertilised eggs, so spend their time helping their mother to expand the nest and raise more young.

“A main jobs is searching for soft-bodied invertebrates to feed the developing larvae, bizarrely, adult wasps cannot digest the food they catch because their gut is so constricted by their thin ‘wasp waists’.

According to the wildlife charity, the colony will go on expanding throughout summer, until a queen decides to produce more males and queens.

The spokesperson added: “After these ‘reproductives’ have left the nest, the old queen stops laying and the workers no longer have access to larvae. 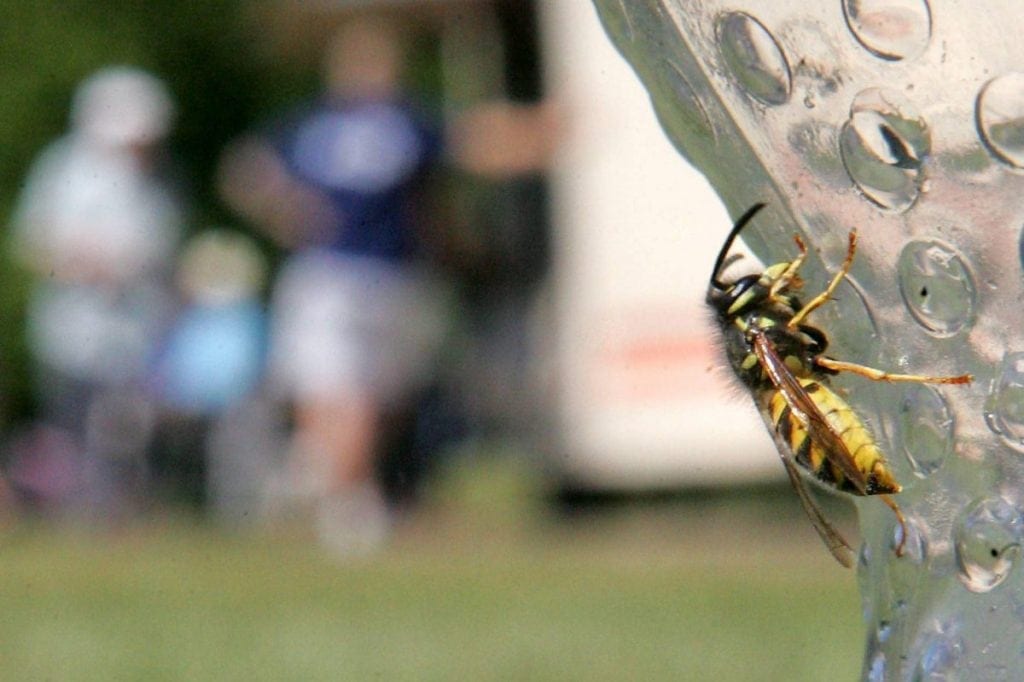 “Instead, they live on the sugar produced by rotting fruit, which can be a problem as fermenting fruit contains alcohol, so wasps can become intoxicated and rather irritating.

“They are also attracted to the abundance of sweet foods that humans provide – to a starving wasp, a jam sandwich or a can of Coke is just too tempting to avoid.”

Dee Ward-Thompson, technical manager at the British Pest Control Association said: “Heat and humidity can impact upon wasp numbers, but so can a number of other factors.

“Maybe the most influential factor on wasp numbers is when people do not dispose of their waste properly, especially food with a high sugar content, such as fruit.

“We always advise waste to be securely bagged and held within a clean container, away from where young children might play.”