A tropical airmass will replace a cold and dry northerly airflow which persisted over the British Isles for most of last week.

by Jack Peat
in Lifestyle, Weather 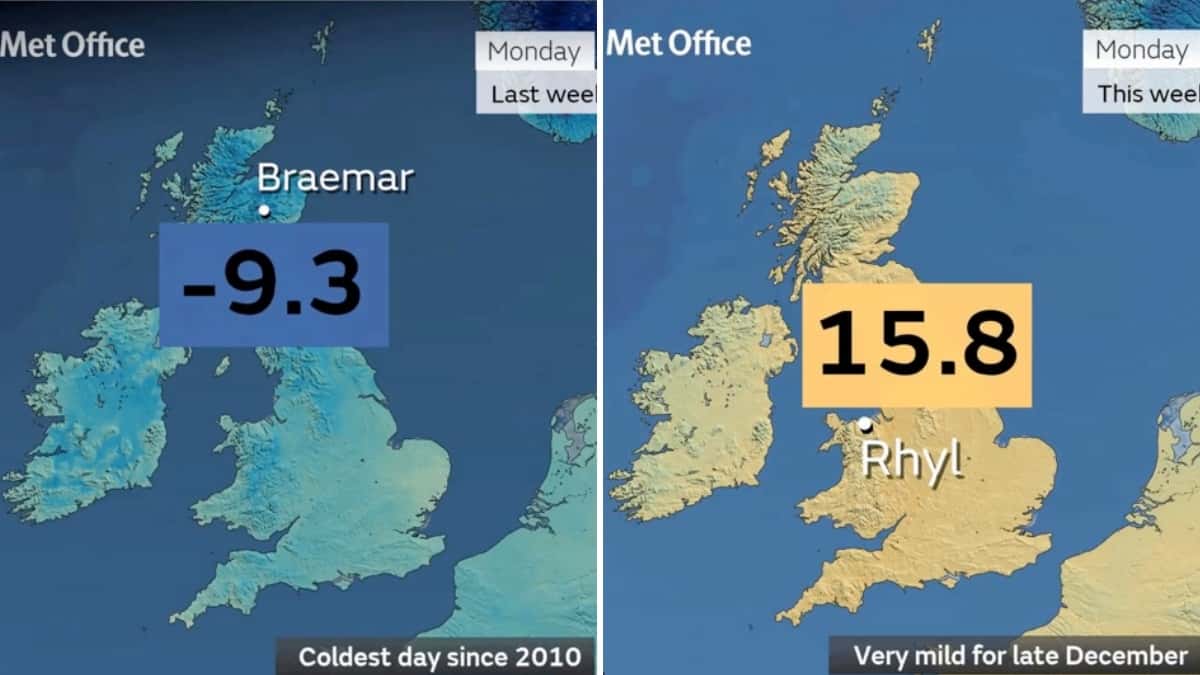 Warmer air from Madeira has quickly swept into the UK bringing an “extraordinary” temperature rise after days of wintry conditions, an expert said.

The Met Office said areas of the UK are widely seeing temperatures of around 14C on Monday, with a high of 15.8C recorded in Rhyl, Wales.

It comes after Braemar in Scotland saw a daytime high of minus 9.3C and a night-time low of minus 17.3C this time last week, while other places around the country experienced lows of minus 10C to minus 15C in the following days.

Dr Stephen Burt, a meteorology expert at the University of Reading, where temperatures have changed from minus 5C last week to 12C on Monday, called it an “extraordinary rise of almost 20 degrees in a few days”.

He explained how the sudden rise had been caused by a change in airmass after warmer air travelled rapidly north from Madeira.

“Very mild and humid tropical maritime air from the region of Madeira transported quickly north and eastwards to our islands because of the development of a major North Atlantic depression over the past couple of days,” Dr Burt said.

“The tropical airmass displaced a cold and dry northerly airflow which persisted over the British Isles for most of last week, and several clear nights allowed widespread severe frost to develop.

“The British Isles often lies on the border between cold, dry Arctic airmasses and those originating from well south of our latitude, and such changes from very cold to very mild, or vice versa, are very much a feature of our winter climate – although not often with the degree or rapidity of the changes experienced within the past 24-36 hours.”

He added that people in the UK “will certainly welcome the reduction in energy bills” as warmer temperatures kick in.

The milder conditions have also come with heavy rainfall, especially across the South West, causing the risk of flooding and travel disruption.

The Environment Agency issued 12 flood warnings and 51 flood alerts as of 2pm on Monday.

Meanwhile, the Met Office has issued yellow weather warnings for rain across southern parts of England and South Wales from 6pm on Sunday to 6am on Tuesday.

Met Office meteorologist Tom Morgan said: “It is an exceptionally mild start to the day, particularly when we’ve had snow and wintry conditions in the last week.

“Temperatures have changed from well below average to way above average for this time of year.”

Mr Morgan said snow and ice is “thawing” and there is potential for localised flooding especially in southern counties and south-west England on Monday.

“Otherwise the whole of the UK will see some rain but probably not heavy enough to cause disruption,” he added.

Drivers should be “on their guard”

The forecaster said that by Tuesday temperatures will start to dip as skies clear with “fairly reasonable conditions” through to the weekend.

“From Friday and Christmas weekend, clear air will travel south-west into Scotland and may come further south-west by the time we get to Christmas Day,” he said.

The RAC has put a severe traffic warning in place on Monday and has urged drivers to be “on their guard” as the wet weather conditions coincide with Christmas travel picking up.

RAC Breakdown spokesperson Rod Dennis said: “With weather conditions in many places this week being almost the exact opposite of last week, drivers getting away for Christmas need to be on their guard.

“Snow and ice is melting rapidly, leading to lots of surface spray, and in some parts the cold, clear conditions have been replaced with heavy rain and strong winds.

Some services on South Western Railway have been hit by delays due to heavy rain and forecast high winds, with disruption expected until 3pm.

While all lines between Plymouth and Exeter St Davids have reopened after a river burst its banks in the Ivybridge area of Devon, trains may still be cancelled or delayed.

A speed restriction is also in place on the West Highland line in Scotland due to severe weather, with disruption expected until 5pm.

Related: Nearly one million vote for Snoop Dogg to run Twitter after he mimics Musk poll