Rebecca Roache has accused the budget retailer of everyday sexism 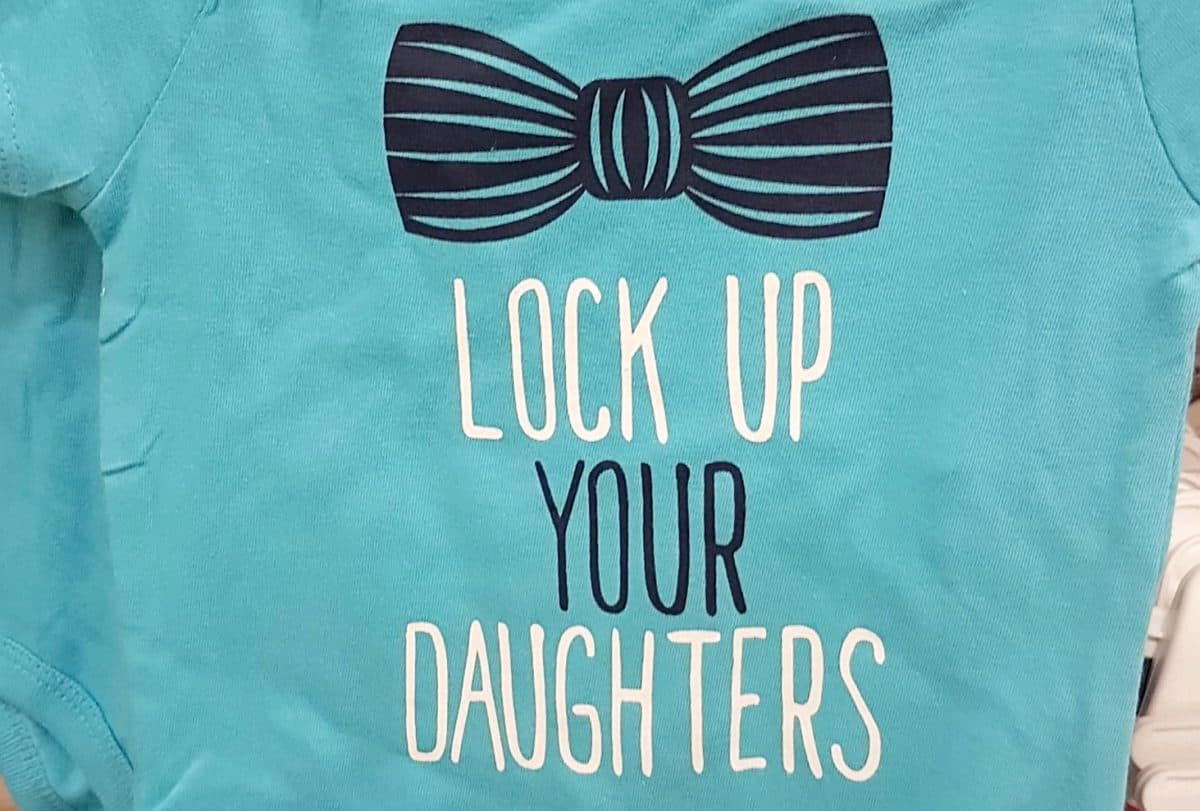 A mum has slammed Poundland for selling a babygrow emblazoned with the words “Lock Up Your Daughters” claiming it teaches boys how to be SEX PESTS.

Rebbeca Roache has accused the budget retailer of being misogynistic and sexist after she spotted the £1.50 babygrow while shopping at their store in Witney, Oxon.

She took to social media to share a photo of the clothing with the caption: “It’s never too early to start training boys to be sex pests, eh @Poundland? #everydaysexism”

Rebecca, a senior lecturer in philosophy at Royal Holloway University of London, claims the slogan sends out an irresponsible message to young children.

She has branded the outfit “depressing” due to its “sexual context” that “men dominate women” which could influence the child’s attitudes towards women in later life.

Parents have flocked to support the furious mun online saying the clothing “places the male infant as a sexual aggressor” but others have branded her an “oversensitive snowflake.”

Mum-of-two Rebecca, of Oxford, said: “It sends out this message that boys will be boys – they can just run wild and do not need to take responsibility for their actions or whatever they do.

“It is a subtle message but implicitly there is a sexual context to it that men dominate women.

“It is just inappropriate and sends out a misogynistic message when they cannot even speak or walk yet.

‘If this is the first message they are getting told, then when they do reach the age when they are sexually active, it is sending out the wrong message.

“It is also assuming that everyone is heterosexual and to be sold to children under a year old is depressing.”

The blue baby grow is sold for £1.50 in Poundland and is available for newborns to infants up to 12 months.

It was sold alongside a pink baby grow aimed at girls with the slogan ‘mummys [sic] little diva.’

Danielle Gillett, 33, from Colchester, Essex, who is mum to four-year-old son Albert said: “It is just awful because it places the male infant as a sexual aggressor.

“It would not be put the other way around saying ‘lock up your sons.’

“If I saw one of my relatives putting their child in it I would feel the need to explain why it is wrong – it makes me feel uncomfortable.

“All clothing for boys tends to have vehicles on and it can be hard to get gender neutral clothes.

“It is not a joke – everything affects you and especially things in the media.

“These messages massively affect your children – my son even recognised the Cadbury font and knew it meant chocolate.”

Mother-of-two Jessica Bentley, 35, from Hertfordshire said: “They are just stereotyping what girls and boys should be.

“It is putting girls as the victims and I agree it paints boys as sex pests.”

However others have spoke up in support of the babygrow on a forum for parents online and described it as “a bit of fun”.

One wrote: “Get over yourselves, you oversensitive snowflakes. It is just a bit of fun and nothing else. The world really has gone made.”

Another mum said: “I think it’s cute. There are far worse things going on in the world than implying your child is handsome”

Another web user said: “Not to my taste but I don’t think it is promoting the wrong idea.

“People are just looking for a reason to be offended these days, bigger problems to worry about in the world than this vest.”

A Poundland spokeswoman said: “While we appreciate the feedback, it’s one of our best selling babygrows so it appears most customers appreciate the humour.”