A gobsmacked midwife cancelled her dentist appointment so she could see the birth of a baby boy – who tipped the scales at a whopping 12 lbs. Theo Brown came into the world on September 6 weighing nearly twice the average of a newborn. Exhausted mother Paula Brown gave birth naturally to the large baby […]

by Joe Mellor
in Children and Family, Family, Lifestyle 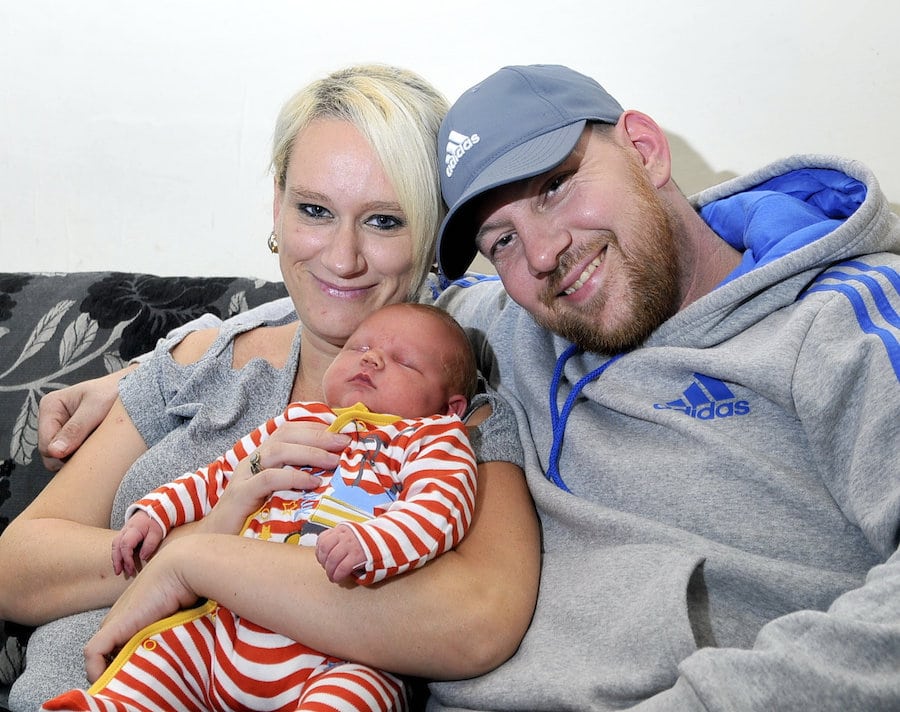 A gobsmacked midwife cancelled her dentist appointment so she could see the birth of a baby boy – who tipped the scales at a whopping 12 lbs.

Theo Brown came into the world on September 6 weighing nearly twice the average of a newborn.

After seeing the size of their newborn, Theo’s parents were forced to ditch the baby wear they’d purchased and go and buy three-to-six-month-old clothes instead.

Mum Paula, 33, said: “It was not pleasant and it was hard work and tiring.

“But the end result of it all is just fantastic.”

Theo John James Brown was born at Blackburn Birthing Centre on September 6 and tipped the scales at 12lb 41/2 oz.

The youngster was initially kept in hospital due to an infection brought on by jaundice but is now at the family home in Great Harwood, Lancs.

His dad Gareth Brown, 32, said birthing staff told the couple it was the biggest baby they’d seen for around five years.

“Everybody is doing fine now, Theo is home and well.

The family said they had been guessing what weight the baby would come in at, with two previous children weighing in at 9lb 3oz and 9lb 8oz respectively.

Theo’s 14-year-old step-sister Milly Mayor, who cut the cord for the birth, weighed a fraction of her brother’s size at a tiny 6lb 11oz.

“We were all making guesses at what weight the baby would come in, but nobody was expecting that,” added Gareth.

“The midwife cancelled her dentist appointment to make sure she was there for the birth, they hadn’t seen anything like it.

“All of the staff at the birthing centre were absolutely fantastic with us, we can’ thank them enough.

“Everyone at the Burnley hospital were great as well.

“It was strange, most of the babies there were tiny and Theo was huge.”

The weight of an average baby in the UK is just over 7lbs; however, Theo does not take the title of Britain’s biggest baby delivered naturally.

That is thought to belong to baby George from Gloucester born in February 2013 who weighed an impressive 15lb 7oz.