Beatles lookalike band the Fab Four were joined by fans of the group on Thursday, halting traffic in the process. 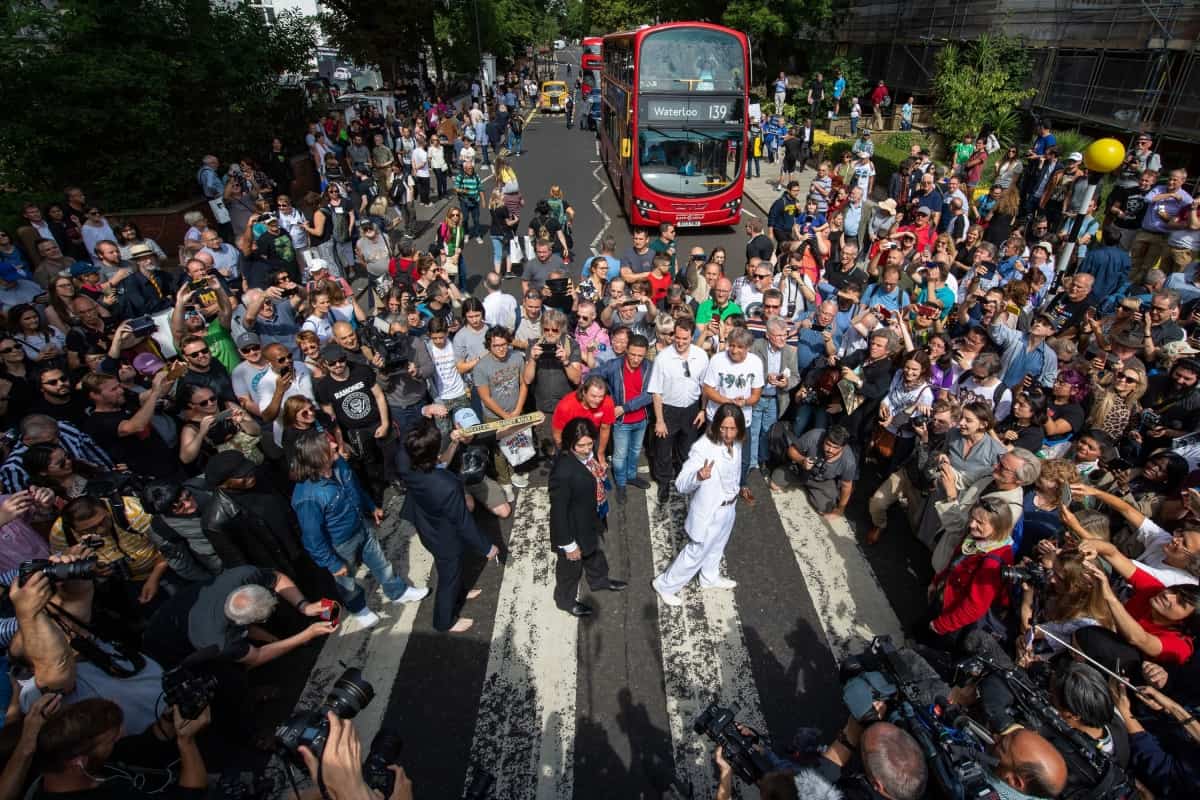 Hundreds of fans gathered at London’s Abbey Road to mark the 50th anniversary of the Beatles walking across its zebra crossing.

John Lennon, Ringo Starr, Sir Paul McCartney and George Harrison were photographed striding single file over the crossing on August 8 1969, and the image went on to become one of the most recognised covers in music history for their Abbey Road album.

Beatles lookalike band the Fab Four were joined by fans of the group on Thursday, halting traffic in the process.

The band arrived at the location in a replica of Lennon’s psychedelic Rolls Royce car and fans posed for pictures on the spot during the gathering.

The zebra crossing has become a destination for fans of the Liverpool group over the past five decades, many making the pilgrimage from all over the world every year.

The anniversary stunt was arranged by Beatles London tour guide Richard Porter, who said: “Every hour of every day there are fans on the crossing. I’ve seen lots of different sights on the crossing too – from couples having their wedding photos taken, to people going across naked!”

Photographer Iain Macmillan snapped six shots of the band walking over the road’s black and white stripes, and the fifth was selected as the cover shot for Abbey Road, the Beatles’ penultimate studio album.

The album was also the last the foursome recorded together as a band.

The gathering came as it was announced the album is getting a special re-release to mark its 50th anniversary.

The record, which was officially released in September 1969, will be presented with new mixes and will be expanded with previously unreleased session recordings and demos.

It is the first time Abbey Road has been remixed and presented with additional session recordings and demos.

Abbey Road’s Super Deluxe box set presents 40 tracks on four discs housed in a 100-page hardbound book, which contains varied content such as track-by-track details and session notes, the cover art and photo shoot, and an essay by music journalist and author David Hepworth looking at the album’s influence through 50 years.

The book is illustrated with rare and previously unpublished photographs, including many taken by Sir Paul’s late wife Linda McCartney, never before published images of handwritten lyrics, sketches, and a George Martin score.

It also includes a foreword from Sir Paul, in which he says: “The Beatles recording journey had gone through many twists and turns, learning curves and thrilling rides.

“Here we were – still wondering at the magic of it all.”

The album’s new stereo mix LP is packaged in a replicated sleeve, with the two Sessions LPs paired in their own jacket, presented with a four-page insert in a lift-top box.