★★★★☆ Nobody can deny that sometimes the simplest of high concept film ideas can be the most ingenious ones. In the case of Danny Boyle’s Yesterday, that idea is so obvious that you can’t help but wonder, why has nobody thought of it until now? Written by the indisputable king of British romantic comedy Richard […] 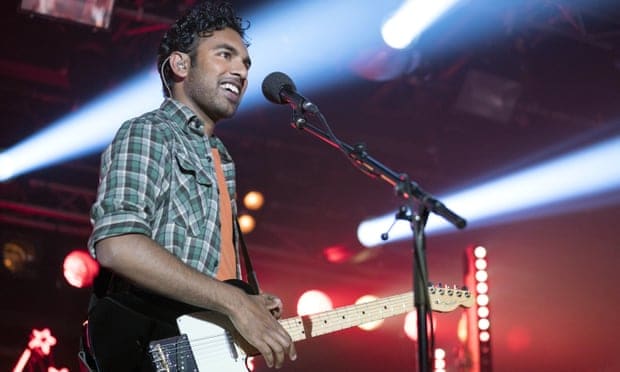 Nobody can deny that sometimes the simplest of high concept film ideas can be the most ingenious ones. In the case of Danny Boyle’s Yesterday, that idea is so obvious that you can’t help but wonder, why has nobody thought of it until now?

Written by the indisputable king of British romantic comedy Richard Curtis (Four Weddings and a Funeral, Notting Hill, Love Actually), Yesterday stars BBC Eastenders’ actor Himesh Patel as a failed musician who wakes up in an alternate reality where he is the only person in the world who knows who The Beatles are.

After years of struggling to make it as a singer/songwriter, Jack Malik ( Patel ) is finally ready to give up. Despite constant encouragement from childhood friend turned manager Ellie (Lily James) who is secretly in love with him, Jack decides that his ill-fated gig at the Latitude festival will be his last.

Things take a bizarre turn when the whole world is hit by a simultaneous power-cut during which Jack gets into a near-fatal accident whilst riding his bike home. Whilst slowly recovering from his recent ordeal Jack soon realises that he is seemingly the only person on the planet to remember The Beatles.

Hilarity, and much soul-searching, ensues when Jack decides to record some of the band’s most loved songs, leading him to be discovered by pop star Ed Sheeran (playing himself with great deal of humour and self-deprecation). Soon Jack becomes a global superstar with millions of adoring fans, but how much longer can he keep the charade up for.

Boyle offers a genuinely touching, smart and an unabashedly soppy storyline which is made even the more watchable thanks to its lead’s brilliantly understated “deer in headlights” delivery. Capitalising on one of the greatest back-catalogues in the history of modern music, both Boyle and Curtis alongside co-writer Jack Barth, give us a beautifully executed, funny and disarmingly charming story about underdogs and unrequited love.

Thematically, when it comes to relatable romantic comedies, nobody does it better than Richard Curtis. His infectious wide-eyed optimism and unequivocal belief in humanity and his own protagonists’ purity of heart, is what keeps us coming back to his stories years after year no matter how self-indulgently sentimental they tend to be.

From the get go, there is a sense that both Boyle and Curtis are fully aware that at the heart of the story, it is the songs that matter the most. We are treated to several lengthy renditions to some of the Fab Four’s most memorable songs, even if like the rest of us, our main protagonist gets a little creative with some misremembered lyrics.

Overall, Yesterday is everything anyone could have hoped for and more. Elevated by two fine performances courtesy of Patel and James, the film wears its heart on its sleeve from the get go, and just when you expect it the least, you’ll find yourself quietly sobbing out of sheer happiness.