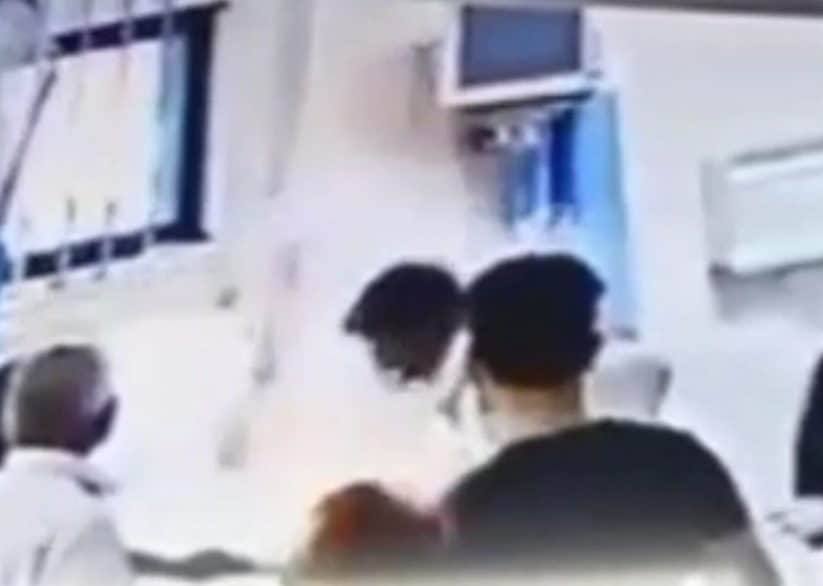 This is the moment smoke and flames burst from a woman’s mouth following an internal explosion while she was being treated in hospital for a suspected poisoning.

The woman, named locally as Sheela Devi, 40, was rushed to hospital after she reportedly consumed some poison, local sources said.

But there was an “explosion” when doctors put a suction pipe into her mouth, and the woman died.

Shocking CCTV photos show the smoke and flames rising from her body, and doctors panicking and crowding round, in JN Medical College in Aligarh, India.

Local sources said doctors are investigating, but suspect the poison she consumed reacted with air or her stomach acid, to create the explosion.

Chief medical officer of JNMC, SS Zaidi, said the patient had been admitted to the hospital by the police.

Speaking to the Times of India, he said: “Some explosion occurred in her mouth and flames along with smoke came out while the team of medics were trying to suck out the poison from her stomach.”

The stomach pumping procedure involves sending a small volume of saline solution into the stomach which is then sucked back out in order to remove the toxins.

It is believed this may have reacted with whatever she had consumed.

He added: “There could be a possibility that she allegedly consumed Celphos tablet (Aluminium phosphate) which releases phosphine gas in addition to Aluminium oxide and other gases, which are highly flammable.

“The explosion occurred when it came in contact with gastric acid.”

He said he thought the incident on Wednesday was a medical first.

By Ben Gelblum and Dinesh Dubey