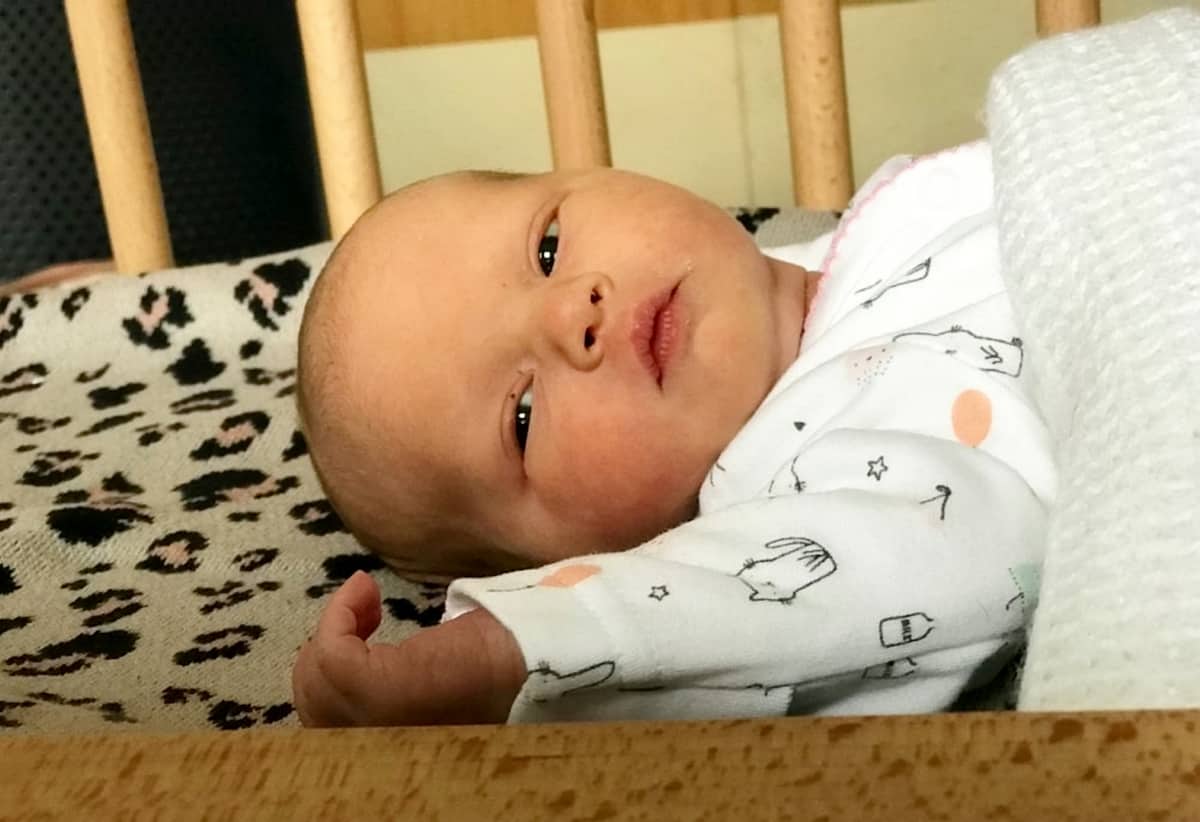 Rebecca Campher, 38, celebrated the arrival of daughter Everleigh Grace in February after overcoming cervical cancer which would have stopped her being able to conceive.

She underwent the rare procedure called a radical trachelectomy, which is offered by only a handful of NHS Trusts, as an alternative to a traditional hysterectomy.

Despite the operation carrying a future risk of miscarriage or premature birth, Rebecca defied the odds and welcomed Everleigh Grace into the world on February 18.

Her consultant gynaecologist Jafaru Abu proposed the pioneering operation to remove part of her womb, offering Rebecca a chance to have children in future.

Although unable to conceive naturally, a period of IVF treatments led to Rebecca falling pregnant in July 2018.

And the couple were left overjoyed when little Everleigh Grace was born by caesarean section at the same hospital, weighing 6lbs 13oz.

Rebecca, who lives with coffee shop owner Greg, 37, in Stanton by Dale, Derbys., said: “There were plenty of times when I thought having a baby would never happen.

“Everleigh Grace is truly a little miracle, and I’m so thankful for her every day.

“She is a really happy baby, very smiley and she loves music, people and getting out every day. I feel truly blessed but its been a long and arduous journey.

“To have cervical cancer at the age of 33 isn’t something that I was ever contemplating, so to be given that news was so devastating.

“We had been trying to conceive and all of a sudden my world came crashing down.

“On top of coming to terms with having cancer, I was facing the prospect of a hysterectomy and the end of my dreams of being a mother.

“But my consultant, Mr Abu, discussed the possibility of another procedure, which wasn’t without risk, but would mean a much stronger possibility of having children in the future.

“Mr Abu was absolutely tremendous throughout, explaining every part of the process in detail and taking me through some tests to make sure I was suitable for the procedure.

“This was a carefully monitored pregnancy, but I was in such good hands.

“From around 24 weeks until birth I was in City Hospital and Mr Abu was constantly around. He was even around for the birth.

“My obstetrician Judith came to see me every week, and my gynaecology nurse specialist Julie was a constant source of strength.

“It really was an amazing team to be around. To be honest, coming back isn’t a chore at all because I get to see the team again.

Radical trachelectomy is a surgical option, which can be carried out in the early stages of cervical cancer.

A permanent suture – called a cervical cerclage suture – is placed at the lower part of the womb to reduce the risk of miscarriage or premature labour.

Mr Abu said: “As this wasn’t an everyday situation for us, we had to make sure that Rebecca’s situation was well managed.

“Once someone has had a radical trachelectomy there is a risk of miscarriage or premature birth.

“We’re really pleased that Rebecca has had a successful pregnancy – it’s been a pleasure getting to know her, and now her baby girl.”

A radical trachelectomy is surgery to remove the cervix, the upper part of the vagina and surrounding supporting tissues.

As part of the surgery, lymph nodes in the pelvis are often removed to check whether cancer has spread beyond the cervix.

It may be an option for younger women with early stage cervical cancer that is small (2 cm or less in size) who want to become pregnant in the future.

This surgery involves 2 steps. The first step is removing the lymph nodes in the pelvis and checking them for cancer spread.

The second step is removing the cervix, the upper part of the vagina and surrounding supporting tissues.