Mark Ash, 34, was dismissed as he waited for a potentially life-saving stem cell transplant in March 2016 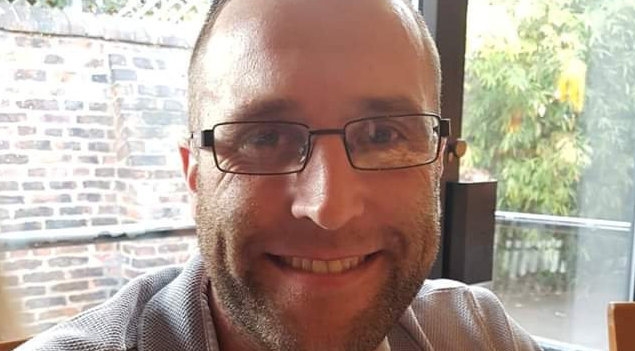 The father-of-one claims he was sacked by his employer while he faced a fight for life after being diagnosed with cancer – for the SECOND time.

He had worked at a prison, which he does not wish to name, for eight years before being diagnosed with stage four Hodgkin’s lymphoma in March 2015 at the age of 30.

Mark claims prison bosses asked him to sign medical retirement forms – which he refused to do – the day after his first round of chemotherapy in April of that year.

After his fourth course, his former employer called him into a work capability hearing in June 2015 and allegedly said he would have to work from home or be dismissed.

Mark, who is a single dad of a nine-year-old son, was due to go back to work full-time following a phased return before being told in January 2016 the cancer had returned for the second time in less than a year.

This time, medics gave him a 50/50 chance of survival and said he would need to have three rounds of “intense” chemotherapy in preparation for a stem cell transplant.

However, no specific date was set for the transplant and Mark says he was told it may take six months to recover from the operation.

Prison bosses then allegedly informed Mark, who lives in Hessle near Hull, East Yorks., he was going to be dismissed from his role in March 2016.

Mark has now spoken out after claiming he was discriminated against from the outset and does not want other sufferers to go through similar.

He said: “I think I was discriminated against from the start. I feel like from the outset there were elements of discrimination.

“I was just concentrating on my treatment, I was having chemo every two weeks.

“When I was told the cancer had returned I was an emotional wreck to be honest.

“I did think about death when I was re-diagnosed and thought about my son growing up without me.

“With the transplant I was told it could take up to six months for me to recover but my employer told me if I couldn’t give an exact date they would dismiss me.

“The way I was treated by my employer at the time was disappointing, this was the biggest fight of my life and I just wanted someone to go ‘don’t worry, we will look after you.

“To have that on top of being rediagnosed was a further strain and did not sit right with me. It was quite devastating especially because I had put in the service I had over the years.”

Mark, who worked as a programmes facilitator, challenged his bosses’ decision but first had to undergo the stem cell transplant after being given a date in April 2016.

During the potentially life-saving procedure, an appeal hearing ruled in his former employer’s favour.

He began a claim for unfair dismissal through The Advisory, Conciliation and Arbitration Service (Acas) after no agreement was reached.

But Mark, who began working at the prison in May 2007, had just three months to file the claim and missed the deadline because he was so ill.

He was given the all-clear in August 2016 and has since moved into agency work before securing his current job role.

But Mark is determined to make sure other cancer sufferers do not go through what he went through with his former employers.

This prompted him to contact his MP Emma Hardy who is now vowing to raise awareness of Mark’s fight.

“I’m really positive about life now because I have moved on from it,” added Mark. “I accept my fight has gone.

“What I’m trying to do now alongside my local MP is to try to get the law changed so people going through similar have longer.

“I’ve stated several times that employers have rights but it’s when someone is in a vulnerable position and they feel they have been treated unjustly.

“It could lead to losing their homes, the impact could be massive. To be honest, the main impact on me was I had to rebuild my career.

“Cancer doesn’t discriminate and anyone can be affected by it.”