By Deborah Hodge Brexit has unearthed some deep seated xenophobia and staggering U-turns from politicians. The vote has divided the country even more. The class system is alive and well. Under Cameron we have seen More Brits are living off benefits today than at any other time since the establishment of the welfare state. Many claimants have […] 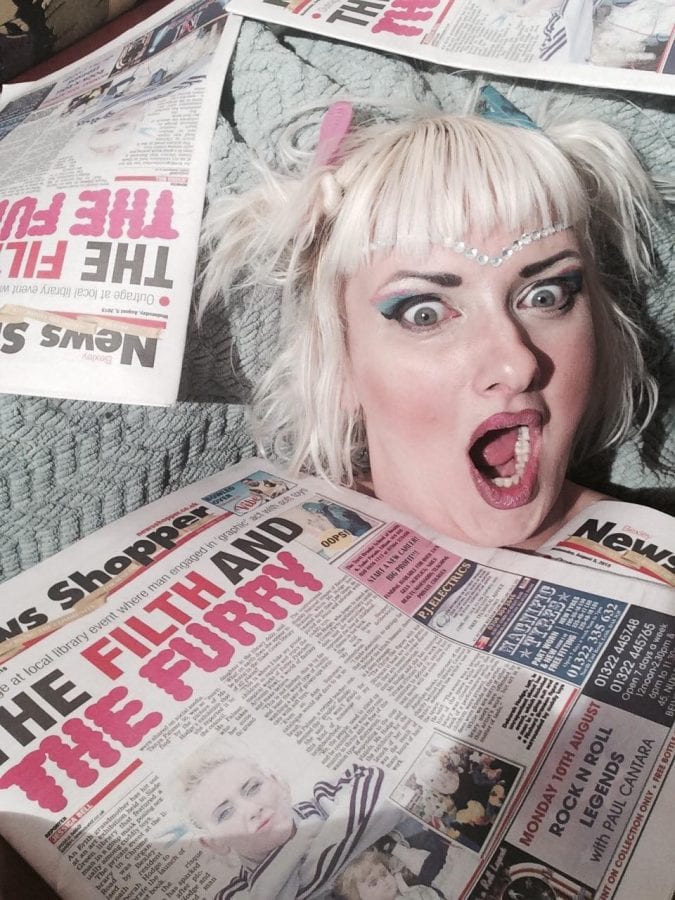 Brexit has unearthed some deep seated xenophobia and staggering U-turns from politicians. The vote has divided the country even more.

The class system is alive and well. Under Cameron we have seen More Brits are living off benefits today than at any other time since the establishment of the welfare state. Many claimants have spent longer on benefits than in work. Some have never known what it is to have a job and others have found that work simply does not pay.

I left work two years ago. Having been a successful teacher and deputy headteacher, it was a big decision. We lived in the countryside but moved back to South London after my fiancé had such a severe breakdown, he was sectioned. What we experienced I would not wish on anyone. They were terrible times.

Shellshocked, I brought my children back to where they had grown up and my new baby under my arm. We moved into a house affectionately known as “Norman” after I used the last of my teaching money to put down six months rent. Now jobless, I began writing as a way of breaking the system. Even at my most successful, I could never afford to buy the house we lived in because prices in South London are incredibly high.

My children were still so disturbed by the events of the last few years that they needed mummy at home. I wrote when they were asleep as there different ages leads to chaos most days.
Having been on both sides of the benefits coin now, I have experienced every level of stigma.

I was the angry tax payer who looked at benefits scroungers smoking fags and wearing tracksuits and tarred everyone with the same brush. I was somehow “better” than them. Now I see the benefits system as a blessing. I am proud to live in a country that can rescue families such as I and I do not intend to stay on benefits after this year is over.

The journey we have been on since moving back to South London has been intense, incredible, scary but also littered with prejudice. We escaped serious domestic abuse that left me with facial scars, violence, threatening behaviour and madness yet were then faced with different demons.

Right from the first moment I registered my four children at the doctor’s surgery we were subject to it. All my children have different names and different fathers. This leads to arkward silences, the automatic assumption that we are scum, rolled eyes and even name calling.

When the owner of the property heard we were on benefits they immediately asked for a guarantor. With no parents or grandparents and none of the fathers wanting to step forward, we were served with eviction despite never being late with the rent. 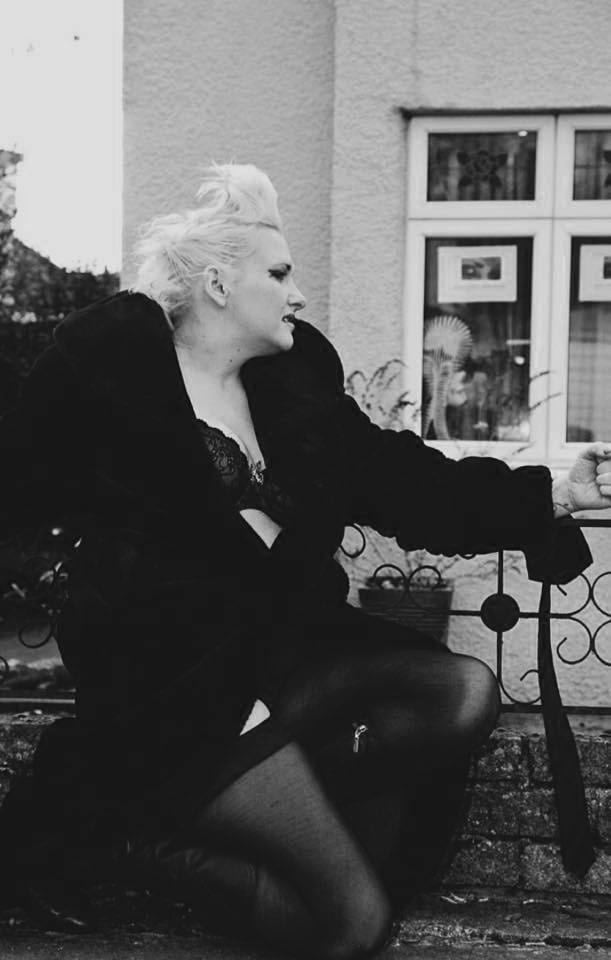 So I held a demonstration outside my house. I tied hundreds of dolls to the railings in protest of my children’s lost childhood. Thankfully we won the right to stay and fight now to buy him so we can stay in our forever home.

The shock of being asked to leave was so great that it forced me to take action in other ways. I finished writing my autobiography and went hell for leather pushing it. I had to make the decision about how candid I would be. I decided to write under the pseudonym Cecily Baker and spilled everything: warts and all.

Alas, what I found was that self publishing can be rather like tumbleweed and this led me to start taking bigger risks.

I appeared on Judge Rinder (and lied to get on… we made the whole thing up… sorry ITV), I appeared on the awful show that was on ITV called “Pick Me” which was humiliating but won a grand for Christmas Presents. I wasn’t leaving there unless I was picked. 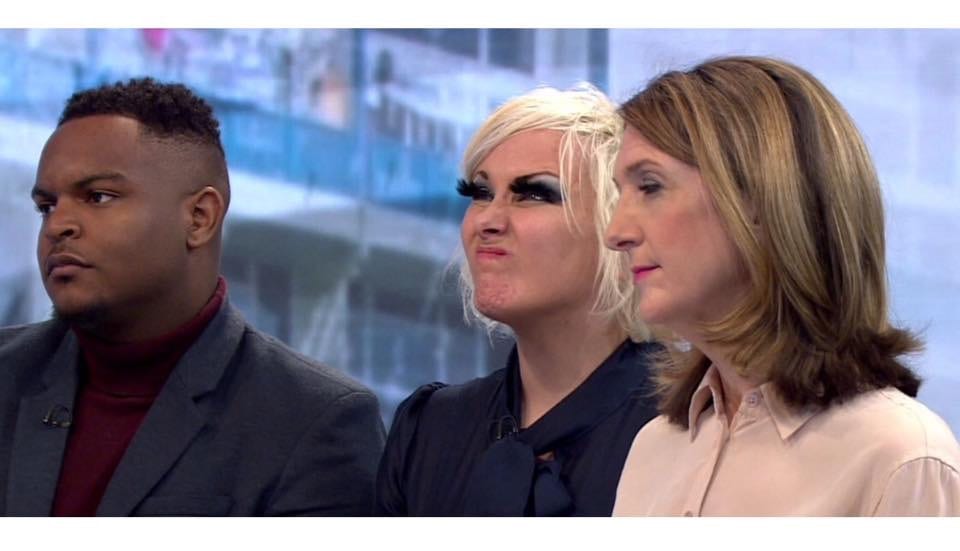 I appeared in a Nannying programme in which the nanny smeared actual dirt on my girls faces but received a grand so I could buy a fairly reasonable Nissan Almeria. No way could we have afforded a car otherwise and the last one had died on my drive. I even featured in a pilot for channel four and had extensions put in my hair and wore a terrible outfit.

I’ve also appeared in the evening standard for my “people who nonced me” art exhibition to launch my first novel and was splayed all over the cover of my local news shopper.

I’ve also written to national press almost weekly with stories, articles and anything that could get me in the press. Sometimes I have worked through the night when my baby has been poorly or the children have needed me in the day.

Possibly my funniest TV appearances have been on Victoria Derbyshire. Each time I have subtly tried to be noticed… big eyelashes, comedy comments and even pegs in my hair live on television: not to mention the references to Richard Branson’s beard.

Whatever happens, has to be BIG to get this house and I am determined to beat the trolls to succeed.

The blows of prejudice have kept on coming though. My baby started getting ill just after her first birthday. She was so poorly she nearly died. As soon as I had a diagnosis of celiac disease, I was accused of having Munchausen’s syndrome by Proxy by my church of all places.

Of course unfounded but it was enough to rock my faith and make me even more determined to prove the haters wrong. Then was the biggest wave of discrimination.

My middle daughter had attended a private school since we moved back. Her father and his parents paid for her education and she had been flourishing. Being on benefits, of course my vehicles had been somewhat run down and dilapidated before my Nissan and the forty minute journey there and back every day took its toll too. Sometimes I turned up with smoke billowing out of the engine and literally bedraggled from no sleep from working all night.

What I found of most of the parents at the school was an immediate ostracising to the point I was actively ignored. When I stood for London Mayor in February 2016, things seemed to heat up even more.

My daughter was being affected at school by children ignoring her or low level bullying saying things like “you are poor” to her every lesson.

Finally I received another call from social services. A parent at the school had made an allegation. Although they wished to remain anonymous, it was obvious which parent it was and it was only after the case was closed I saw what they had written about me in an email.

This was enough to pull my child out of the school permanently. The online trolling and bullying was one thing, but to take things to this level was not only abuse, but disturbing too. 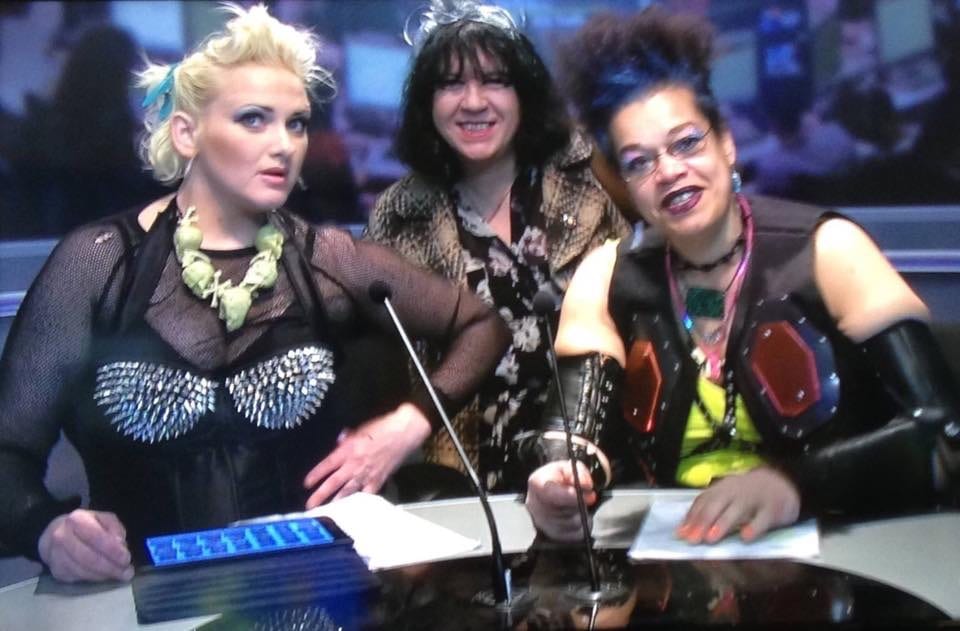 It’s been a huge decision to “come out” and tell people that I am on benefits but the backlash is bigger than the potential gain. Recently I finished filming to appear on the next channel of Benefits Britain. It was a decision that will either pay off, or fail dramatically. With big risks come potential huge losses.

Although I write for magazines, attend events and wear incredible outfits that I have made, I don’t actually get paid for any of it…. yet. The way I see it though is, media attention could get me noticed. It could attract an agent, a publisher, a TV channel and ultimately lead to me getting #Norman.

Only this morning my middle daughter asked me how the plans to get him are going. I gulped whilst I drank my coffee. The children are desperate not to leave.

The clock is ticking however. In September my youngest goes to nursery. She finally has a place after years of waiting. This is when I need to return to work so the countdown has most certainly begun.

After this, I see the dream of Norman dissipating and perhaps we will find another cheap house to rent in this area but the chances are slim. We love Norman but his run down dilapidated interior and two bedrooms make him much cheaper than the norm round here. 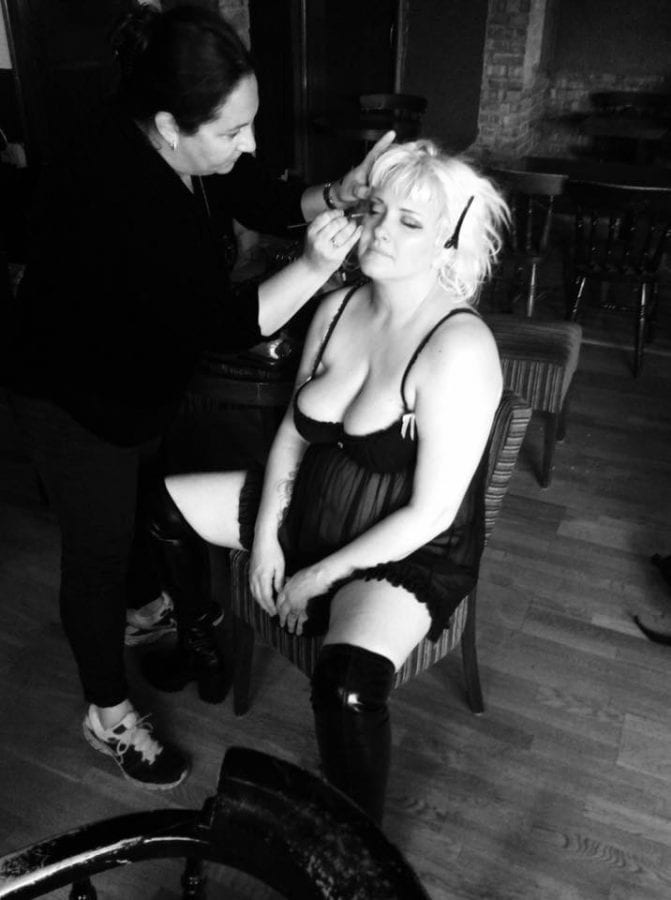 The future is uncertain now but whatever happens I am determined to keep all my children with me. Even though my son is 19, the world is such an uncertain place for him too.

I won’t stop trying until Amelia attends nursery then alas it may be off to the city to try and get the big bucks for this house. After what my children have been through though it would be a huge blow not to be able to do the school runs. Even now my middle daughters sometimes have night terrors from all the nights they heard me screaming whilst being beaten.

But, it’s not over to the fat lady sings. We are in a period of huge uncertainty with Brexit so anything is possible right?

I won’t stop trying. Only last week I finished filming for the channel five tattoo disasters programme. As I lay there in tears being tattooed in the most painful place, the only thing keeping me going was the mantra “this is for your kids”. I had no interest in getting another tattoo but as channel five were lovely enough to film my back story, my art and even my books, I couldn’t say no.

What’s next? No idea but I will never give up until we have a forever home.

All I will say to newly independent Britain: if I can do it… then anyone can.