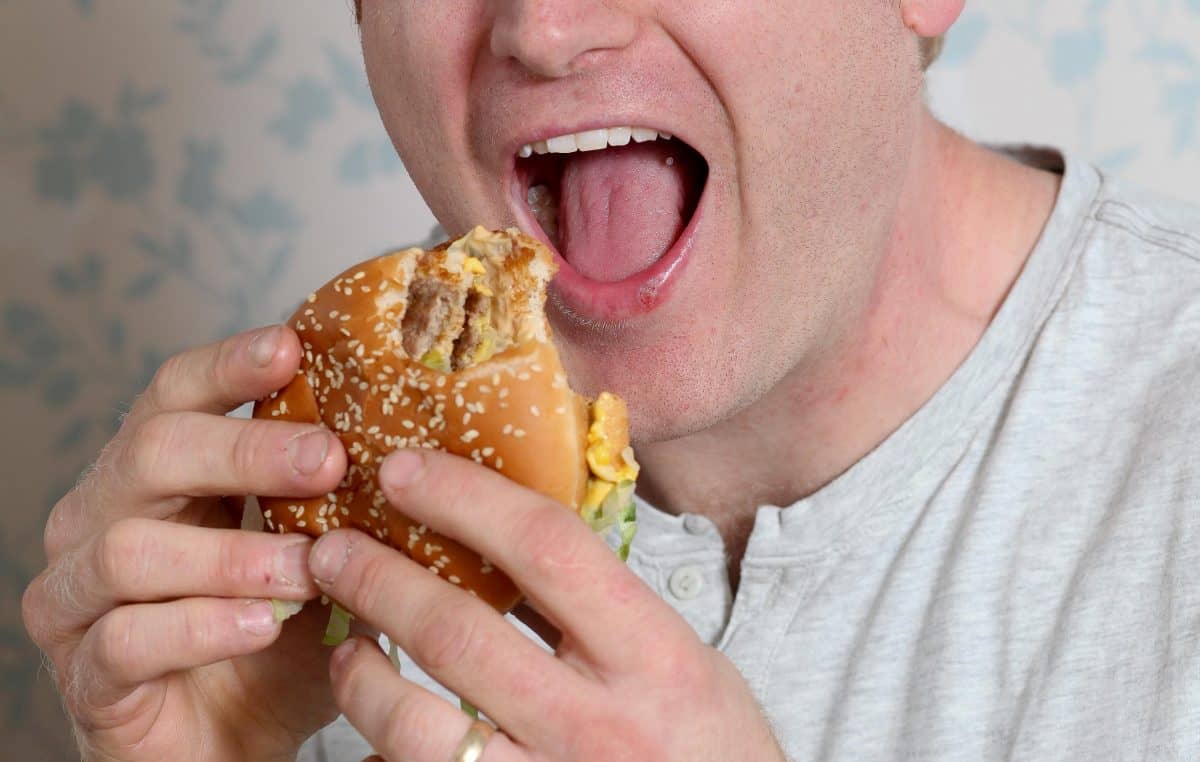 A brain ‘switch’ that makes people gorge on hamburgers, pizzas and fries has been identified for the first time.

It lies in a region of grey matter called the central amygdala – which is known for controlling emotions.

Experiments found turning off a protein called nociceptin in these cells stopped mice pigging out on tasty food.

Professor Thomas Kash, a pharmacologist at North Carolina University, said: ”
“Scientists have studied the amygdala for a long time – and they’ve linked it to pain and anxiety and fear.

“But our findings here highlight it does other things too – like regulate pathological eating.”

Deleting around half the nociceptin-making neurons in the circuit reduced the mice’s gluttony.

It kept their weight down even when they had access to rich food – without affecting their normal diet of chow.

Study first author Prof Andrew Hardaway, who is based in the same lab, said: “Our study is one of the first to describe how the brain’s emotional centre contributes to eating for pleasure.”

The findings shed light on the “neurobiology of noshing” – explaining why it’s so easy to get hooked on calorie-dense biscuits, cakes and fast food, say the researchers.

Drugs that target the chemical pathway may combat the obesity epidemic. Almost two-in-three adults in the UK are overweight – the highest rate in western Europe.

It’s the key to the addictive effect of the tastiest foods that makes you go on stuffing them even when you know you’ve had enough.

Prof Kash said: “This circuit seems to be the brain’s way of telling you if something tastes really good then it’s worth whatever price you’re paying to get to it – so don’t stop.”

His team found the specific network motivated the mice to keep on eating fatty and sugary treats – even though their basic energy needs had been met.

The mammalian brain circuit described in Neuron lifts the lid on modern humans’ appetite for abundant and tempting delicious fare.

It’s a by-product of evolution when large, rich meals were scarce. Our brains were wired to devour as many calories as possible.

This was because no one knew when the next big feast would come, said the researchers.

This is triggered by hunger and keeps our energy level up. But this approach has had limited success.

But some are now focusing on the “hedonic” kind – the pleasure-driven eating of calorie-laden food that goes way beyond our strict energy needs.

It’s thought to reflect our lingering adaptation for ancient environments where famines were frequent.

Perceiving calorie-rich food as particularly nice – and bingeing on it whenever it was available – provided a crucial survival advantage by storing up extra energy.

But following that instinct now – in a time of plenty – is fuelling obesity. The condition affects about four-in-ten adults in the US and over a quarter in the UK. It raises the risk of diabetes, heart disease and cancer.

Prof Kash said: “There’s just so much calorically dense food available all the time now – and we haven’t yet lost this wiring that influences us to eat as much food as possible.”

Previous research has pointed the finger at nociceptin – a signaling molecule in the nervous system.

Prof Kash and others have shown compounds blocking the protein – called nociceptin receptor antagonists – have little or no effect on homeostatic feeding by rodents.

But they do curb hedonic bingeing on tastier foods that are bad for them.

Now Prof Kash and colleagues have found the circuit through which they work – opening the door to an anti-obesity pill.

They engineered mice to produce a fluorescent molecule along with nociceptin – literally illuminating the cells that drive it during binge-eating.

The researchers are now studying the circuit in more detail, the timing of its activity in relation to feeding and how nociceptin antagonists alter its functions.

Prof Hardaway said: “It adds support to the idea everything mammals eat is being dynamically categorised along a spectrum of good/tasty to bad/disgusting.

“This may be physically represented in subsets of neurons in the amygdala.

“The next major step and challenge is to tap into these subsets to derive new therapeutics for obesity and binge eating.”

Other scientists are studying nociceptin antagonists as possible treatments not only for obesity and binge-eating but also for depression, pain and substance abuse.

“But on the whole blocking nociceptin seems to stabilise behaviour – bringing it closer to normal.”