Nascent during the 1990s, bacchanalian lunches have fallen out of favour in London. While decadent business lunches would have once stretched long into the afternoon, the era of lavish feasts and lenient expense accounts is long gone. Nowadays, financial pressures and time restraints have, for the most part, fuelled a growth in popularity surrounding desk […] 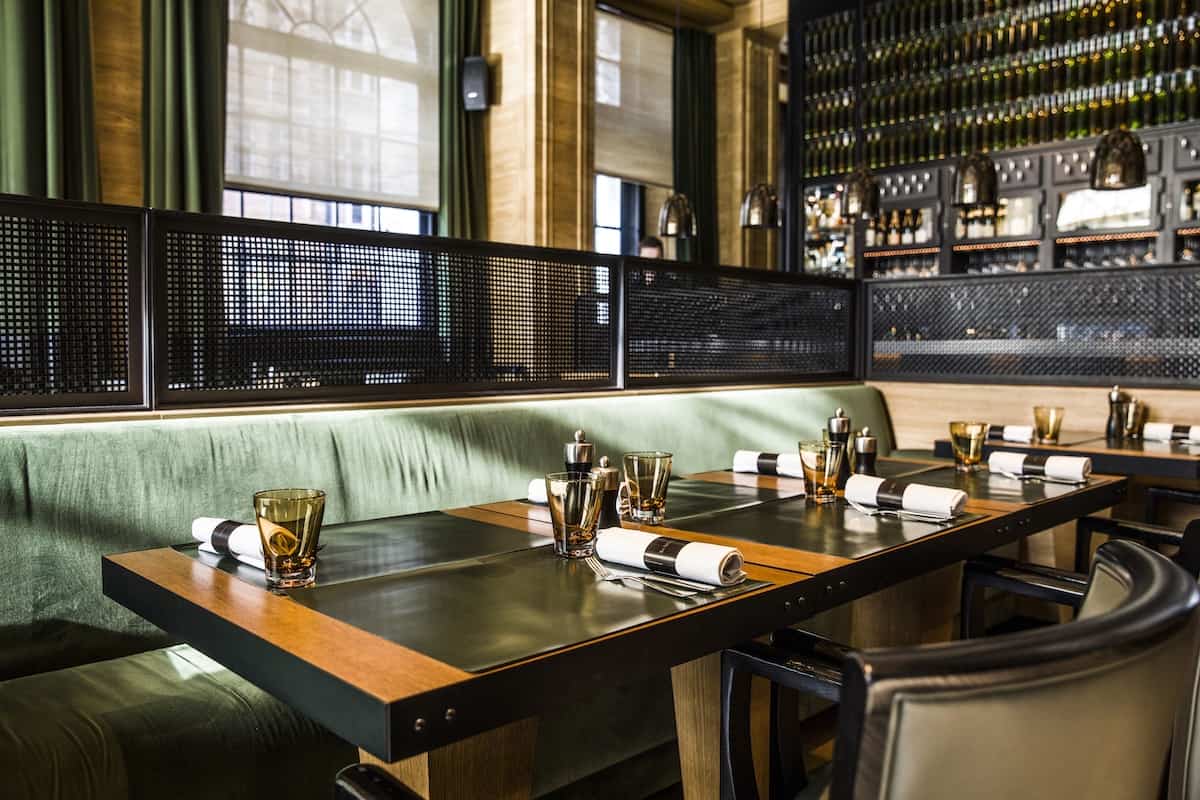 Nascent during the 1990s, bacchanalian lunches have fallen out of favour in London. While decadent business lunches would have once stretched long into the afternoon, the era of lavish feasts and lenient expense accounts is long gone. Nowadays, financial pressures and time restraints have, for the most part, fuelled a growth in popularity surrounding desk lunches: uninspired salads or wet sandwiches and burnt coffee from Pret. At the beginning of 2017, Lloyds of London even went so far as to ban day drinking – forbidding the liquid lunch. When these rare occasions to partake in an indulgent lunch do seldom arise, nonetheless, Les 110 de Taillevent is the place to be.

Following the success of the two Michelin-starred Le Taillevent in Paris, opened in 1946 (and subsequent Le 110 de Taillevent – a sister restaurant with a prominent focus on wine), London’s Les 110 de Taillevent staggered across the channel in 2015, taking over a former bank space on Cavendish Square. Honouring the buildings history, the restaurant is bedecked with a vaulted ceiling and feature-wall of green bottles matching rich green leather banquettes which make the space look more like the House of Commons than a modern restaurant. In the kitchen, Ross Bryans has recently been appointed as Head Chef, having previously worked in the kitchens Corrigan’s Mayfair, Jason Atherton’s Pollen Street Social and Restaurant Gordon Ramsay.

Arriving for a mid-week lunch, I’m taken to a spacious corner table and talked through the various menus. The a la carte menu features a spread of French classics, each touched with a stroke of 21st century modernity. Les 110 de Taillevent also boasts London’s largest selection of wines available by the glass: 110, to be exact. While perusing the vast menu, a waiter pours a glass of Champagne (Charles Heindsick Brut Réserve), championed as part of a monthly promotion which offers a selected Champagne for £10 per glass. A menu celebrating truffles is also served at the time of writing, featuring a highlight dish of al dente linguine smattered with fistfuls of aged parmesan and a generous heap of black or white truffle shavings.

Lunch begins with a “risotto” of spelt escorted by a generous hunk of lobster claw and exemplary lobster bisque – deep, rich and aerated like honeycomb (£13). Each of the a la carte menu’s dishes are also accompanied by a spreadsheet of wine pairings, ranging from below £8 to in excess of £20. A cold glass of dry, flinty Sancerre is a perfect pairing for the spelt risotto and that outrageous bisque. A croquette of pig trotter (£14) is another masterclass in joyous insalubriousness. Two nuggets of slow-cooked pig’s trotter are cloaked in breadcrumbs and deftly fried, accompanied by a wedge of fried black pudding and batons of sharp, palate cleansing green apple – a holy trinity of complementary ingredients.

A main of Highland venison (£32) features an expertly cooked loin, paired with seasonally appropriate pumpkin and a juniper and rosemary jus with more depth than the name suggests. Flavours synonymous with country cooking, here refined with bracing modernity and free from galling pretension. Swiss chard, however, is characteristically on form with its nourishing banality. The wellington of partridge and foie gras (£28), on the other hand, is lunch’s undoubted highlight. Blushing partridge ensnares tranches of wobbly foie gras, snuggled by crisp puff pastry. The wellington is superb, with all of its parts superlatively cooked, joined by a modest spear of salsify, hazelnuts and blobs of quince gel. As if the dish needed another excuse to order, the suggested pairing is a pure, soft-grained Langhe Nebbiolo from Sottimano, Italy – the winery’s baby Barbaresco.

Les 110 de Taillevent’s signature dessert, a pink lady apple tart tatin (£18), is listed as being sized for two, yet ample for at least three. A French classic, the dish is well-executed yet the burnt caramel sauce is opinion-dividing, at best. Having matured terrifically since opening, the kitchen’s food is largely well-executed albeit often pricy; the wine list remains a decisive triumph and service strikes a pleasing balance between polished and comforting.

At the next table, a group of elderly gentlemen enjoy a cheeseboard, each cheese paired with a different glass of wine. It’s the exact model of gouty indulgence that Les 110 de Taillevent mercifully encourages. Long live decadent lunches.