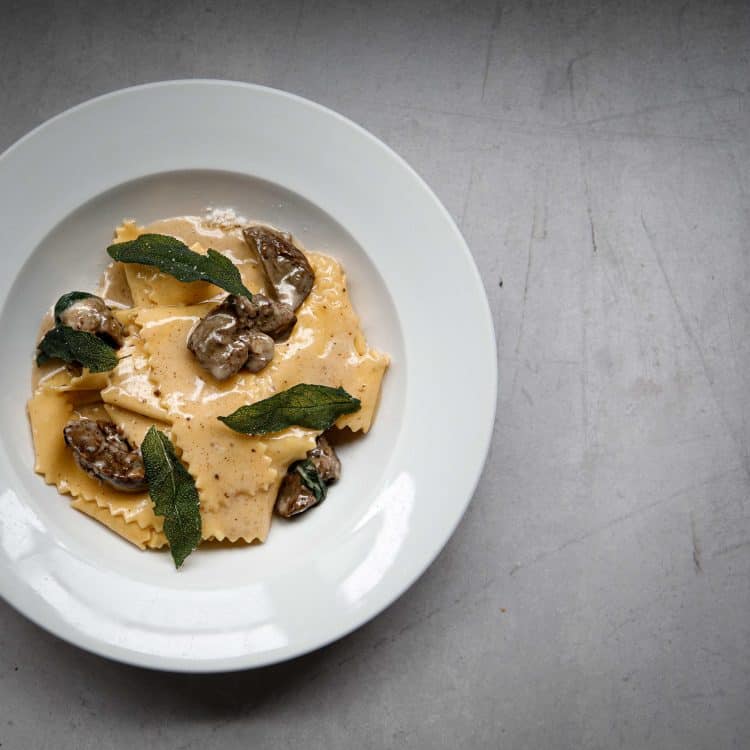 In a city scattered with so many casual Italian restaurants specialising in pasta, Bancone is at the higher end of the spectrum alongside the likes of Padella, Pastaio, and Lina Stores.

With two central London restaurants, the first opened in 2018 near Covent Garden, with a long counter offering the best seats in the restaurant. (‘Banconi’ literally means ‘counters’ in Italian, after all). On the cusp of Soho and Mayfair, another followed towards the end of 2019, taking over the area’s former Foxlow site. While Bancone Golden Square (actually on Lower James Street) feels slightly less traditional than the original, the space is arguably more atmospheric, more like a very modern northern Italian restaurant, set across two floors, with low lighting, plenty of marble accents and a olive tree that acts as an key interior focus. The casual, very relaxed service also suits the venue, although it’s easy to feel like a castaway when sat in the comfier booth seats – in which case the counter seats are highly recommended if available.

Both sites have also launched a brand new seasonal menu for autumn. Pasta remains a key focus, using fresh dough made on site, while other regional dishes from around the country are also championed. A recent dinner at Bancone Golden Square began with a slab of dense, cakey focaccia studded with sweet Datterini tomatoes. Sardinian culurgiones were also convoyed by tomato, in the form of a thick sauce. The sauce’s sweetness managed to slightly overwhelm the dish, however. Without the sauce, the culurgiones tasted far better with the fried pasta parcels harbouring a rich cheese and potato filling.

On to the pasta, the ‘silk handkerchiefs’ at Bancone have become a hugely popular menu mainstay. A modern reinterpretation of classic egg yolk ravioli, thin sheets of pasta are joined by a sauce rampant with butter and toasted walnut which brings textural depth to the equation, crowned with an impeccably cooked egg yolk that bursts and further enriches the sauce.

A new addition to the Bancone autumn menu, thick strips of pappardelle were slightly overcooked yet accompanied by a gorgeous concoction of fried chicken livers alongside a splash of brandy and fried sage leaves. Even better was a dish of tagliolini dressed with a rich buttery sauce and crowned with a generous heap of autumn truffle slices whose earthiness worked in perfect harmony with the egg pasta and its rich, simple sauce. A true celebration of seasonal produce.