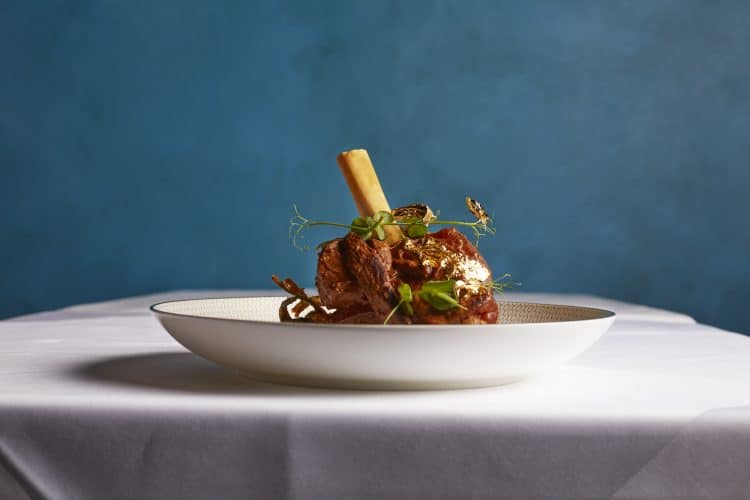 Over the past few months, chef Atul Kochhar has opened two brand new restaurants in London, both Mathura and Masalchi. These new sites join Kanishka in Mayfair and the chef’s growing empire of restaurants in Buckinghamshire, with plans to open another in Kent next year.

While Masalchi in Wembley Park champions Indian street food, Mathura is touted as Atul Kochhar’s most ambitious opening to date, taking over the former Westminster Fire Station. In stark contrast to his new Wembley Park restaurant, Mathura is very much a classic fine dining restaurant – something that’s becoming somewhat of a rarity, with the Covid-19 pandemic having seemed like a final nail in the coffin for these particular establishments. Whereas Masalchi’s menu suggests ordering a selection of dishes to share – as has become an ubiquitous industry standard – Mathura feels like a very traditional a la carte (or tasting menu) affair. The contrast is also reflected in both the prices and ingredients. Masalchi dishes rarely surpass the £10 mark, while Mathura has a menu festooned with luxury touches, including a Yorkshire wagyu fillet with 24-carat gold leaf. Yours for £84.

But while the restaurant’s menu is on the more expensive side of the scale, Mathura is not a completely inaccessible restaurant, nor is it particularly pretentious. In fact, it’s very much in line with many other high end Indian restaurants in the surrounding area. What’s also interesting is the assimilation of nods to countries surrounding India. Specifically described as an Indian and Asian restaurant, Mathura incorporates influences from nine additional countries, including China, Iran, Afghanistan, Pakistan, Nepal, Bhutan, Bangladesh, Myanmar, and Sri Lanka.

With the restaurant’s grade II listed setting built in 1906, a selection of the Free English Baroque style fire station’s original features have been preserved, including original tiles and a firefighter’s pole. Entering through the original carriage doors, the space is elegant with charming service to match.

As for the food served at Mathura, executive chef Shishir Sinha has worked with Atul Kochhar on a selection of menus including an a la carte selection, a set menu, and two tasting menus – one of which is exclusively served in the Kushan Dynasty private dining room.

A recent lunch at Mathura began with an elegant dish of steamed halibut cloaked with a verdant herb dressing and joined by a bold mustard chutney to contrast the fish’s delicate flavour. Even better was a less pretty vegetarian dish of morels stuffed with gently spiced paneer, served on top of an upturned portobello mushroom, also capped with a layer of paneer, while a smattering of black truffle wasn’t really necessarily but helped to amplify the mushrooms’ earthiness and the dish’s overall brilliance.

A highly recommended dish of Persian kebabs was less of a hit, tending to over promise and under deliver. With sumac and walnut marinated beef, the Iranian kabab torsh was a highlight from the selection, as was the chopan kabob – a specialty of Pashtun cuisine with tender hunks of lamb meat. While the chicken supreme had a tasty marinade of saffron and yoghurt, the chicken itself was dry and overcooked, as were the lamb chops by a minute or two. Far better was a tranche of pan-fried turbot, perfectly cooked and served alongside Indian gooseberry and a generous drizzle of machher jhol sauce rampant with turmeric and ginger, demanding to be mopped up with an accompanying roti.

To finish, a milk chocolate soufflé offered a promise of spicing, which was in fact very subtle, while the soufflé had struggled to rise more than a centimetre or two above the lip of its ramekin. The flavours were satisfying, however, with the inclusion of tart raspberry chutney and basil sorbet. The Mathura take on an apple and pear tarte tatin was a surprise delight, on the other hand, also highly recommended. Thinly sliced apples were caramelised and pressed into a floral formation, set atop a golden puff pastry base and accompanied by a scoop of cardamom and mascarpone ice cream and a bold ginger sauce.

On the launch of Mathura, chef Atul Kochhar said: “We are not just creating a menu which pays homage to all the fantastic culinary traditions throughout Asia, we are taking a fresh look at the very best that each country has to offer and coming up with a new take on Indian cuisine.

“It’s my love story to all the wonderful food I have eaten on my travels, re-interpreted by me and my team to create a truly innovative dining experience in one of the most gorgeous settings you’ll find in London.”

Mathura can be found at 4 Greycoat Place, London, SW1P 1SB.