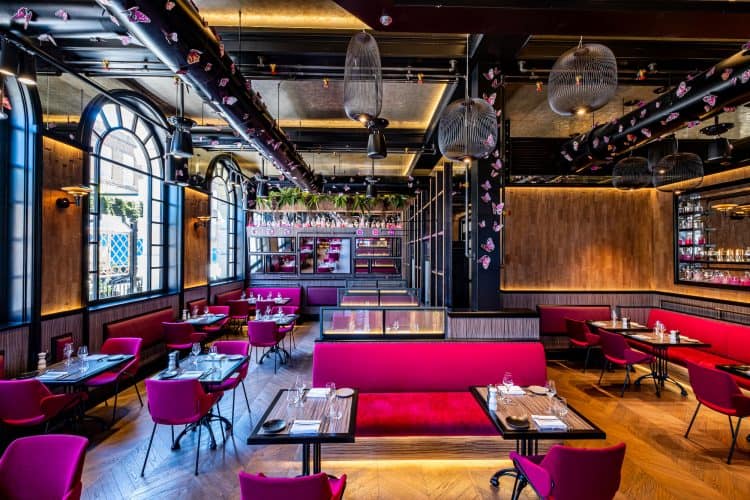 A new restaurant serving Northern Italian food ‘with a modern British twist’, Magenta opened in May, set within the Megaro Hotel.

Just opposite King’s Cross and St Pancras stations, the new restaurant joins a mob of stylishly decorated Italian restaurants in London, having been designed by architect Henry Chebaane. Echoing the 19th century heritage of the building and its location, the 66-cover restaurant has a colour palette inspired by coal, concrete, and steel of the industrial revolution, accented by soft furnishing in the magenta of its by-product. The ceiling is also festooned with thousands of pink and silver butterflies. Marrying the vivid magenta accents with Victorian industrial architecture, the space looks something like The Gallery at Sketch, if it were to open a Gotham City outpost.

As for the food, Executive Head Chef Manuele Bazzoni’s fine dining menu is well-suited to both the surroundings and the polished service. Having previously worked in the kitchens of  Mayfair’s Le Boudin Blanc and Trinity in Clapham, Manuele Bazzoni’s four-course a la carte menu is inspired by the chef’s favourite flavours from his native Northern Italy, joining a wine list which showcases a large selection of the country’s vineyards, selected by sommelier Alessandro Facciolo. The restaurant has also launched a brand new ‘aperitivo afternoons’ menu, serving Italian cocktails alongside cicchetti from 4-6pm every Tuesday-Saturday.

Offering four courses for £52, the Magenta menu features a good selection of dishes. A recent lunch began with a hot loaf of bread baked with charcoal flour, accompanied by a gorgeous Sicilian olive oil for dipping, with bracing grassy bitterness. As is often the case, starters included two of the meal’s main highlights, with a crispy cannelloni shell filled with white Dorset crab meat, bolstered by a gel of brackish preserved lemon. ‘Rolata’ of duck and rabbit, on the other hand, was a decadent slab of its key ingredients pressed with prunes and hazelnuts, convoyed by a heavily layered, olive-flecked brioche.

From the Magenta menu’s ‘primi’ section, all five dishes featured pasta in some form or other. A mound of wholemeal caserecce featured well-cooked wholemeal pasta, with its categoric texture, simply dressed with a semi-sweet tomato sauce, set atop of a layer of caponata-esque aubergine, then capped with dried black olive crumb and small basil fronds. Even better was a large raviolo filled with scallop and also served with a pan-seared scallop, both lulling in a pool of buttery vermouth and lavender sauce spiked with samphire.

A main of seared halibut, on the other hand, featured a symphony of complementary ingredients to accompany the well-cooked tranche of fish: mushroom jam, peas, girolles, Tropea onion puree, butter sauce, and a paper-thin film of lardo. Elsewhere, roasted seabass had a crust of thin potato coins like scales, plus mussels, charred courgette wedges and a deep-fried courgette flower.

To finish, an espresso mousse was refreshingly quite delicate, spiked with shards of crispy pastry which brought an interplay of contrasting textures against the mousse and accompanying chocolate sorbet, though the film of jelly, like a large contact lens, felt like an unwelcome guest, bringing very little flavour to compensate. Yoghurt and apricot mousse was a far lighter dish, however, more befitting of the menu’s other highlights, served over a smear of apricot jam and capped with a rocher of absolutely inspired amaretto and burnt almond ice cream.

RELATED: Quality Chop House: a cut above the competition