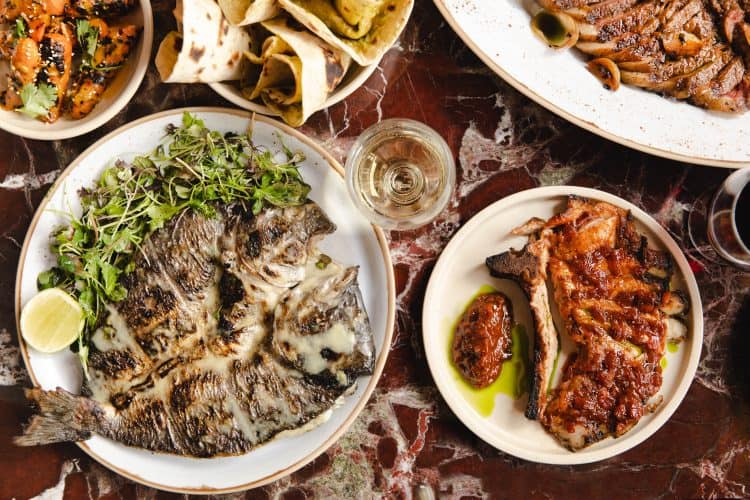 As hospitality businesses continue to re-open, a collection of brand new restaurants, bars, and pop-ups have also planned to open in London. We pick the most exciting new restaurant and bar openings taking place throughout September.

A new restaurant from the team behind Kudu in Peckham, Amy Corbin and Patrick Williams have opened Kudu Grill, also in Peckham. Having revived a former Truman’s pub on Nunhead Lane, the team’s new restaurant has space for 50 covers and focuses on the braii – a South African way of grilling using only wood and charcoal. Here, Chef Patron Patrick Williams’ South African roots are showcased with the menu championing bold flavours and a passion for fresh, seasonal British ingredients – some of which are sourced from the pair’s nearby allotment. Most dishes are served straight from the open grill, though the menu comprises five sections: snacks, starters, braai mains, sides, and desserts.

On the opening menu, expect dishes such as grilled potato flatbread with wild garlic and lardo; fried pigs’ tails with honey mustard; duck terrine with gribiche and biltong scratchings; cauliflower with caper raisin, goat’s curd and kale; whole black bream with zhug butter roti; and a MelkTert choux bun with candied kumquats and milk ice cream. A range of the Kudu Collective’s signature drinks will also be served, including the Smokey Kudu with South African whiskey, sonoma rye, vermouth, and smoke.

Kudu Grill is open now and can be found at 57 Nunhead Lane, London, SE15 3TR.

For the first time in its nine year history, Tottenham-based Beavertown Brewery will open a pub this month. Recently used as Tottenham Hotspur’s ticket office, the brewery will take over the Corner Pin opposite The Tottenham Hotspur Stadium. Set over three floors, with a beer garden for the warmer months, the pub will serve a yet-to-be-unveiled food menu, plus Beavertown’s entire range of core beers on draught. These include the likes of Neck Oil, Gamma Ray APA, Lupuloid, the new Bones Lager, and more. Moreover, a selection of wines, spirits, cocktails, and soft drinks will also be served.

On the launch of The Corner Pin, Beavertown Brewery founder Logan Plant said: “We’re thrilled to be opening our first ever pub in Tottenham, the place we call home. We can’t wait to open the doors to this historic venue and breathe new life into the much-loved pub, the only way we know how…with epic design, cracking beer and a great atmosphere.”

The Corner Pin is set to open in September and can be found at 732 High Road, London, N17 0AG.

In partnership with JKS Restaurants, chef Chet Sharma will launch his debut restaurant, BiBi, this month. Named after the Urdu word meaning ‘lady of the house’, Bibi is used as a term of endearment for maternal figures, with the food inspired by the chef’s travels around the subcontinent and the food cooked by his grandmothers. Delivered with precision and a focus on ingredients, the food served will be contemporary and approachable, with a ‘Chef’s Selection’ menu available for lunch and dinner with a rotation of seasonal dishes. An a la carte menu will also be served, featuring dishes such as Chettinad-spiced chicken liver parfait with blackberry chutney, sandwiched between yoghurt meringues; Orkney scallop nimbu pani in ceviche-style with Kaji lemonade; and Malai lobster, made with Cornish native lobster and lemongrass-infused beef fat.

On the launch of the new restaurant, BiBi chef Chet Sharma said: “After years in the making, I can’t believe BiBi’s opening is finally here. Whilst my food doesn’t look traditionally Indian, I want to make sure the flavours are genuine, and something that any Bibi would recognise. I’m looking forward to showcasing the produce from my travels, both around India and the UK, such as the Paigambari wheat from Punjab and the amazing chicken we’ve sourced from North Yorkshire. I can’t wait for our guests to join us on this journey.”

BiBi is set to open on Thursday 9th September and can be found at 42 N Audley Street, London, W1K 6ZP.

Inspired by his childhood and years spent exploring the street food of northern India, Rohit Ghai will open a new restaurant this month. Specialising in sharing plates and cocktails, Manthan (meaning ‘to churn and reflect’) is a new project from Rohit Ghai and his business partner Abhishake Sangwan. Opening in Mayfair later this month, Manthan will serve a menu championing both Indian home-style cooking and expertly honed techniques. On the menu, a selection of the chef’s mother’s signature dishes will feature, including chatpata, tikkas, chops, and aloo paratha with homemade butter.

Moreover, the menu will have a prominent focus on vegetarian dishes, with almost half of the small plates entirely meat-free and many vegan-friendly. Expect the likes of Burford Brown egg curry; tawe ki masala arbi; pyaz ki kachori with mint and tamarind chutney; curry leaf pepper fish; Jaffna lamb; Andhra jackfruit dosai; and garlic kheer. Dishes with chicken, lamb and guinea fowl can also be made Halal. As for the drinks, a concise cocktail menu will also be served.

On the launch of Manthan, Rohit Ghai said: “I’ve never cooked this way before in London – dishes that truly speak to my past, as well as my present. Manthan is a culmination of many years of work and I hope speaks to Londoners as being representative of the comfort food I love from home as well as the food I have made my name cooking here.”

Manthan is set to open in September and can be found at 49 Maddox Street, London, W1S 2PQ.

Following a short soft launch period, a brand new Cocotte will launch in South Kensington this month. With restaurants in Notting Hill, Shoreditch, Parsons Green, and Queen’s Park, the new Harrington Road site continues the group’s focus on rotisserie chicken. Founded by Romain Bourrillon, the restaurant sources high-quality French ingredients from smaller traditional farms, including free-range chickens from a farm in Evron (Pays de la Loire, France). These chickens are slow-roasted with a combination of herbs de Provence and a secret spice mix, available by the whole bird, halved, or quartered. Elsewhere, the French-influenced menu features dishes such as foie gras and mushroom croquettes, or cheese and charcuterie boards highlighting French produce.

On the launch of the new restaurant in South Kensington, Cocotte founder Romain Bourrillion said: “We have wanted to open a Cocotte site in South Kensington since day one and we are very glad to finally be able to open one of our restaurants in this beautiful suburb. I lived in this area for many years and we hope to bring something that our neighbours will love and be a part of the local community.”

Cocotte South Kensington is set to open on Sunday 5th September and can be found at 11 Harrington Road, London, SW7 3ES.

Co-founded by John Devitt and Shuko Oda, udon noodle specialists Koya will open a new site, Koya Ko, on Broadway Market this month. Eleven years after launching the first Koya in Soho, the new site will bring the brand’s udon noodles to east London for the first time, inspired by the fast-paced dining of Japanese train station noodle bars. A no reservations udon bar, the new neighbourhood restaurant will also offer takeaway, as well as offering a standing counter for up to eight guests. As for the food, Koya Ko will offer a fresh take on Koya’s udon and donburo dishes developed exclusively for the Broadway Market site, using seasonal produce predominantly sourced from UK suppliers.

Koya Ko is set to open in September and can be found at12 Broadway Market Mews, London, E8 4TS.

The Sea, The Sea, Hackney

This month, The Sea, The Sea’s new restaurant will launch a Chef’s Table experience. Led by Executive Chef Leandro Carreira, the Chef’s Table will serve an omakase-style tasting menu from its open kitchen, serving just 12 guests per sitting. For the opening, menus will include the likes of turbot dry-aged in house, dressed with four types of vinegar and served with grilled hot dog pods and honeycomb tomatoes; or cured Horse mackerel with pine nuts, sake, and shallots. Following a year in development, the menu will also include langoustine ‘Wedding Cake’, featuring a seaweed ‘egg cake’ baked in an artisanal Portuguese pot, seasoned with togarashi and stuffed with smoked langoustines and a sauce made from their heads. The cake is then glazed in homemade almond milk and topped with langoustine ‘floss’ before being sliced and served in front of guests.

Chef’s Table at The Sea, The Sea Hackney is set to launch in September and can be found at 337 Acton Mews, London, E8 4EA.

A new project from Kricket’s Will Bowlby and Rik Campbell, SOMA is the pair’s debut bar. Named after the Hindu Moon God, SOMA will serve drinks influenced by the Indian subcontinent and neighbouring countries. With a late license, drinks will be served into the small hours, including the likes of a gooseberry chaat margarita made with tequila, triple sec, homemade gooseberry cordial and chaat masala; coconut and jaggery old fashioned with bourbon, jaggery, toasted and desiccated coconut, and mace bitters; and a savoury pickled mooli martini with vodka, dry vermouth, lightly pickled mooli, and fennel oil.

SOMA is set to open on Thursday 2nd September and can be found at 12-14 Denman St, London W1D 7HL.

Following the success of its St James’s Park venue, Urban Greens has opened in Canary Wharf, offering healthy, flavoursome, grab-and-go salads. Each salad available has been developed with a combination of ingredients and textures which complement each other. While a selection of salads are served, Urban Greens’ signature Gogosan salad is the most popular by far, comprising sesame-marinated glass noodles, kimchi, sugar snap peas, avocado, broccoli, bean sprouts, coriander, toasted cashews, and sesame seeds, dressed in a light gochujang miso dressing. It’s also vegan, dairy-free, and gluten-free.