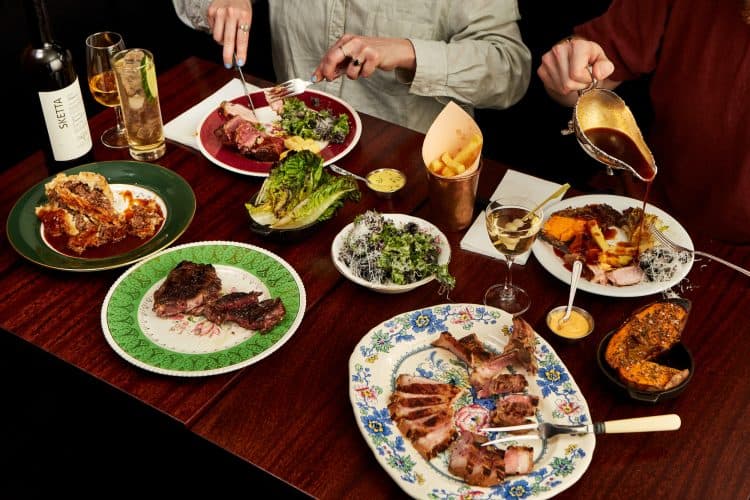 Seven years ago, Gordon Ker opened his first Blacklock restaurant in Soho, hoping to restore the tradition of great British chophouses. From an old basement brothel, the restaurant predominantly served inexpensive chops and steaks scorched with 200-year-old irons from America’s Blacklock Foundry, which quickly became a resounding success. Additional outposts soon opened in the City and just off Shoreditch High Street. Now, three years since the last opening, Ker has opened the biggest Blacklock yet, set beneath Bedford Street near Covent Garden. In a building formerly home to the King’s Coachmakers, the new venue has space for 110 covers, with the entrance just off Bedford Street, on Bedford Court.

As is the case with the group’s other restaurants, Blacklock Covent Garden has absolutely nailed the New York-style steakhouse ambience with its sleek décor and charming service more typical of local neighbourhood restaurants than big central London openings.

The new Blacklock also continues to focus on sustainability. Here, meat is sourced from long-term partner Philip Warren in Cornwall, with a focus on regenerative farming. In addition to showcasing lesser known cuts such as Denver and tri-tip steaks, the restaurant has a whole animal approach, making something out of everything. This also helps to keep costs significantly lower than chophouses and steakhouses of a similar ilk. As well as serving accessibly priced lesser known cuts, premium large cuts are also offered at competitive prices. The porterhouse, for instance, is priced at £9 per 100 grams compared to Hawksmoor’s £11 per 100 grams, or Smith & Wollensky’s T-bone steak priced at £13.45 per 100 grams. Those seemingly small increments make a huge amount of difference when ordering large steaks to share.

Moreover, Blacklock also offers sustainable wine on tap, as well as championing a pip-to-peel ethos behind their bars, keeping waste to an absolute minimum. The cocktails on offer are both inexpensive and well-considered. The Beefy Mary is an absolute must-try, irrigated with beef jus to add an extra savoury note.

Taking things one step further, Blacklock is also working towards B Corp status, a certification proving the company’s commitment to purpose over profit. In line with this, Blacklock’s ‘Planet Promise’ sees a tree planted for every customer that dines with them – an initiative launched during lockdown which has so far seen over 125,000 trees planted. In addition, Cocktails That Give Back signifies that a donation to charity partner, End Youth Homelessness, will be made for every cocktail sold.

As for the food, all of the Blacklock classics remain available, joined by some newer dishes. The ‘all-in’ option continues to boast exceptional value at £22 per person, comprising a trio of pre-chop bites, a stack of expertly cooked ‘skinny chops’: pork belly, lamb chops and beef rump piled onto chargrilled flatbread which soaks up all of the residual fat and resting juices, plus a choice of two sides between two people. The crispy kale side is an absolute must-try, simply garnished with a blizzard of grated parmesan.

Elsewhere, starters include the likes of slow-braised and shredded pig’s head on toast with a boat of Blacklock’s famous deeply umami gravy, and pickled red chilli to slice through some of the richness. The cull yaw crumpet is another gloriously insalubrious mess, with slow-cooked ewe leg and shoulder loaded onto a crumpet which acts as a sponge for the braising liquor, crowned with pink pickled onion petals. It’s also served with more of that remarkable gravy.

A brand new dish for Blacklock Covent Garden, the steak and stilton pie features a very short suet-enriched pastry crust which gives way to present a holy trinity of braised steak, bone marrow, and Colton Basset blue cheese. To follow, a 600g porterhouse steak (a perfect size for sharing, alongside a selection of starters and the pie) was cooked to a faultless degree of medium rare, with the dry-aging adding huge depth of flavour to the beef, particularly the fat with a rich, eggy taste. Picking up the bone and gnawing to scavenge any stray meat is entirely necessary.

To finish, a selection of desserts are available, notably the Blacklock white chocolate cheesecake, while a cocktail trolley also glides around the space, with classic Negroni and Old Fashioned cocktails on offer: a perfect conclusion to a practically perfect meal at one of central London’s most exciting new restaurants.

Blacklock Covent Garden can be found at 16a Bedford Street, London, WC2E 9HE.