A refreshing Shoreditch restaurant with a new autumn menu. 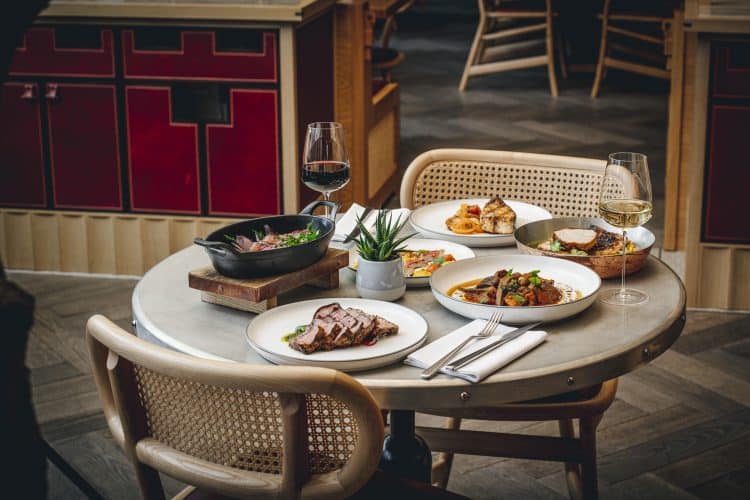 My dining companion and I are having a conversation. It’s about salmon, which I don’t eat because of the conditions in which it’s farmed. Although I do concede eating supermarket chicken – perhaps the most publicly, least acceptably reared meat of all. There are other meats too (all of them) that I eat, which further morally compromises me. And, if given the opportunity, I would try Ortolan; wouldn’t turn down foie gras or most other foods, the ethics of which we like to ignore, that many seem to enjoy so much. Or at least some still do, the tide is perhaps turning on that.  So a certain level of ambi-dexterity is required when reviewing a restaurant with a guest (though the guest, of course makes the experience tenfold more enjoyable). Especially if the guest is a person we don’t know so well, I’ll leave you to join the dots on that one. We do agree though that Barboun might be the brightest restaurant in London which in a funny way is quite refreshing. I’d rather bright than loud anyway.

Barboun is on what my guest describes as ‘very much the Liverpool Street side of Shoreditch High Street’. So the area has a slightly collegiate atmosphere due to the density of co-workers flirting with the demands of living a partially metropolitan working existence which ends each day at around 11pm (or whenever the last train home is). Clearly there is Shoreditch and Shoreditch and we are in the former. Although both seem a bit too earnest these days; specificity must be applied to the borough of Hackney – Clapton, Hoxton, Homerton, Dalston, London Fields, de Beauvoir Town – the means of skirting around what used to be the central signifier.

Anyway, Barboun is a neatly designed, large and airy space with high ceilings. There’s a grand staircase and an almost Art Deco feel to the bathrooms. The restaurant has a new menu celebrating the flavours of Levantine coastal towns – Cyprus, Turkey, Lebanon, Syria, Israel – and emphasises cooking on open fire. There’s a good mix of vegetarian, meat and fish dishes while the restaurant is open all day which means breakfast, lunch, dinner and the obligatory brunch.

The name, Barboun, means red mullet in Turkish and this, of course, is where we start. Texturally, red mullet is a slightly strange fish but it’s intriguing in the right way and served with preserved lemon, hazelnut and charred Romano pepper. All of this creates balance and makes it the right accompaniment to the squid. These days, many might describe this as ‘crack squid’. It’s crispy, salty, there’s a teasing threat of chilli which isn’t ever fully realised (most prefer it this way, happier with the idea of chilli than its actual presence) and a creamy coriander mayo to cut through the sharper, harder flavours. Perhaps that’s why crack has become an adjective; always accompanying the hard, fast, sharp, jagged flavours that often accompany deep frying. Dirty but deliciously so. The right kind of wrong.

The main course is halibut which is such a pleasingly meaty fish. Everything is well seasoned and this applies to the lamb as well which is beautifully paired with roasted tomatoes. The former soft and peculiarly meaty (as lamb is) while the latter scythes through the savoury flavours with sweet acidity. On the side, an elegant Greek salad and we are rewarded by our dedication to the waiter who seemed keen for us to have it (never ignore these cues). To top it off Mujadara (lentils, grains, lemon and garlic oil) and a smooth bottle of Italian Primitivo – although it was nice to see Turkish wines on the menu at Barboun.

There’s a relaxed atmosphere to Barboun that’s genuine. We got the sense that the people who work there really care about the restaurant. There’s a belief that this place is something right and good, which is paired with a desire to succeed. It might sound perverse (what is the restaurant industry if anything else?) but this isn’t always the case. Necessarily this can’t always be the impression a place gives, especially in London, and so the meal as well as the experience was decidedly refreshing. And as ever, it was nice to be refreshed.