With three restaurants in Amsterdam, The Seafood Bar’s first London outpost has opened in Soho. 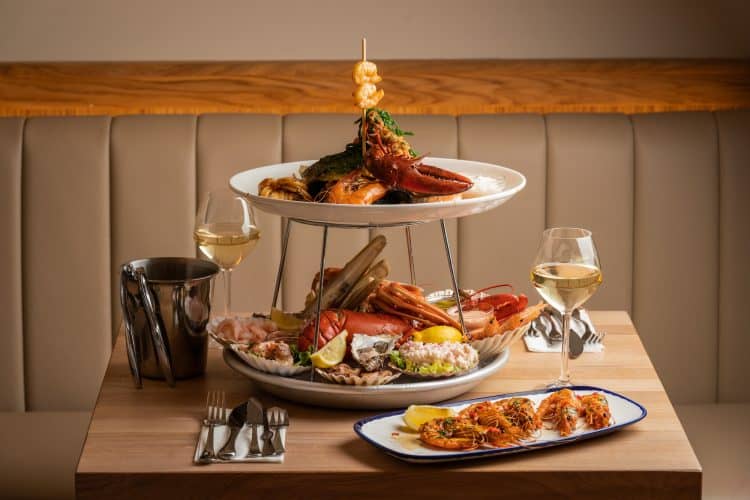 Is there anything more important than a restaurant’s name? Probably. But it’s the first thing we hear when a friend, colleague, family member mentions where they’re going for a meal. So necessarily, the name forms our primary perception of a place. It’s why Bret Easton Ellis’s creation in American Psycho, Dorsia, was so perfect – exclusive and elusive, three smooth syllables with an elongated ‘r’ in the middle that can be drawn out for as long as it takes the entirety of those involved in the conversation to hear and make note of where you’re going.

These days in London, new ventures seem to gravitate towards the short and punchy – Brat, Kiln, Core, Kudu, Temper, Kricket – which is all becoming a bit predictable and affected. The recently opened Fiend in Notting Hill springs to mind. Of course though, a bad name doesn’t necessarily mean a bad restaurant. Think Rovi and My Neighbours the Dumplings, slightly cringe names but both places serve great food (don’t worry, I get the reference of the latter).

In any case, this makes the restrained title of The Seafood Bar as refreshing as the glass of Ruinart champagne my guest and I were served on arrival during a recent visit. At last, a touch of Dutch practicality arrives on Soho’s Dean Street among the piebald of hyper-modern restaurants in this part of London.

And why would a seafood restaurant be called anything else? Indeed, the name is as classic at the menu of the venue which opened in September – the fourth from a brand which has three locations in Amsterdam.

That means caviar, lobster, mussels, salmon, razor clams, shrimp, squid, whelks, crab, cockles, periwinkles, oysters, clams, langoustines, seabass, plaice and anything else they could possible rustle up from the seabed.  A nice touch is a recommendation of a couple of wines to pair well with each dish written on the menu, it’s helpful for the uninitiated (or most of us, I would imagine).

So often people who come to these kinds of places are oyster enthusiasts and there’s a good selection from West Mersea, Lindisfarne, Maldon and Gilardeau in France. And aside from fish, shellfish and mussels served in a variety of different ways, the real story here is the platters. There’s a selection of cold, grilled or mixed to choose from and it’s surely the reason most will visit this restaurant.

We went for the ‘Combination’ which was a rather unholy mixture of grilled fish, lobster, squid, braised mussels and cold shellfish from razor clams to whelks, crab, prawns and oysters. It was the whelks that won the day. They are so close to crossing the border into unacceptability and, like many other foods which toe the line of palatability, this makes them all the more delicious. Side dishes of a bowl of fries and asparagus with parmesan are a perfect inevitability. To start was a fresh, citrusy sea bass ceviche and, in total opposition, pillow-y crab cakes. Harmonious.

There is nothing worse than bad seafood (for all the unmentionable reasons and beyond) but conversely there is rarely anything more enjoyable than good seafood. And this was the latter. It’s not something we experience every day and is often confined (or resigned) to holidays. The Seafood Bar is a generous place too, our platter arrived with all the accompaniments – plenty of lemon and sauces, that is. It’s nice not to have to ask for these things.

Inside, things are clean, modern and unflashy which perfectly suits the atmosphere and would work well for lunch or in the evening. This is a restaurant primarily concerned with eating, which can be an odd rarity. Of course, there is a genuine Seafood Bar which guests float by on arrival displaying all the shellfish, crustaceans and beyond on ice that they will be enjoying later.

It is easy to tell that this is a new restaurant, but it has barely been open a month and that will change (it’ll have to). On the whole though, we’re lucky to have The Seafood Bar in London. It’s a family run business which has been successful in Amsterdam (a good barometer from my point of view), the brand is interested in sustainable seafood and it’s not often we get to have this kind of food at reasonable prices.

The Seafood Bar can be found at 77 Dean Street, London, W1D 3SH.