Named after the beautiful islands of the Antilles, Antillean is chef Michael Hanbury’s first solo restaurant. 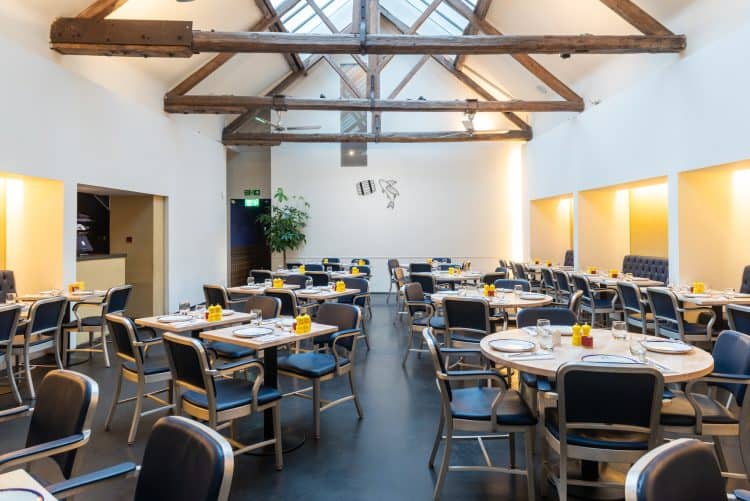 The first solo restaurant from chef Michael Hanbury, Antillean celebrates the food of the Caribbean islands (described as ‘Pan-Caribbean’), with the name derived from the beautiful islands of the Antilles. The chef’s love of the Caribbean food and cricket has heavily inspired the opening, with a menu reflecting on the islands’ French, African, Spanish, Indian, Dutch, and Chinese influences.

Set within a listed 18th century coaching house, the restaurant is split into four distinct areas – The Cocktail Bar, ‘The Island’, Main Restaurant, and The Loft. The main dining room has high walls and exposed ceiling beams, while skylights flood the room with natural light during the day, complimenting the stylish white and blue colour scheme.

As for the food, chef Michael Hanbury draws on his experience from working in kitchens such as Asia de Cuba and Chino-Latino – where he met his current business partners Baziz Rachedi and Chris Martin. An a la carte selection is available, while a bottomless carnival brunch is also served on Saturdays, but to make the most of a visit, it’s worth ordering the Antillean signature menu. Priced at £65, the signature menu offers five-courses with a number of dishes served to be shared. A rum pairing is also available with each course, chosen from the impressive selection of 100 rums from around the world.

From the signature menu, a recent lunch began with a refined amuse bouche of scorched sardines on soldiers of harddough toast, segued by a dollop of lightly spiced chilli mayo, washed down with a glass of Joseph Perrier Brut Cuvée Royale NV Champagne. Elsewhere, a prettily presented dish of grouper featured slivers of the raw white fish cured with flavours inspired by the classic Mojito cocktail, fanned out across the plate and embellished with elements of rum alongside clean flavours of mint and lime.

Another gorgeous fish dish of mackerel escovitch featured delicate tranches of the oily fish whose richness was balanced by the presence of pickled batons of carrot and red pepper, plus pickled all spice berries to add crunch alongside depth of flavour. Deftly grilled octopus also featured in another clean, fresh-tasting dish with a Scotch bonnet emulsion adding just a whisper of heat, complete with mango and cucumber, while charred chicken skewers were fairly moreish, accompanied by a tomato and mango salsita.

An even better chicken dish followed, after a quick interlude of palate cleansing lime and coconut sorbet, with achiote tamarind chicken cooked on the bone and cloaked with a sweet, spicy, almost brittle skin, joined by comforting rice and peas, plus Antillean barbecue sauce, which poured and tasted more like a spiced gravy: which is no bad thing. Braised oxtail, on the other hand, was served without the bones and compressed into a rich pudding over a bed of potato puree and also joined by a sauce which managed to lift the dish to a new level of attractiveness.

Flying fish has become a particular signature dish at Antillean, and for good reason. Two meaty fillets were well cooked and perfectly paired with a slab of Bajan cou-cou – a dish made with cornmeal and okra, typically resembling a firm savoury porridge. Elsewhere, a sofrito of sauteed red onion, pepper, and tomato brought even more depth to the accomplished dish.

To finish, a selection of four desserts featured. Guinness punch ice cream tasted exactly like Guinness punch, which is a good thing, of course – with the flavour particularly well-suited to this ice cream and its silky texture. Rum macerated raisins were the jewel in the fairly savoury plantain tarte tatin’s proverbial crown, while the Island chocolate torte was elegant but especially rich, with some balance brought by a garnish of passionfruit. Best of all, however, was a seemingly simple slab of carrot cake crowned with wafer thin pineapple slices, with glorious crumb structure: sweet but not overbearingly so, particularly succulent, and generally quite refreshing.

On the launch of Antillean, chef patron Michael Hanbury said: “I see Antillean as a great opportunity to open up the incredibly varied flavours and spices of the Caribbean. People think only of Jamaican food like jerk chicken and rice and peas. But the influences on all the islands are global.  We are reflecting this and so much more at Antillean.”

Antillean can be found at 74 Blackfriars Road, London, SE1 8HA.