By Jonathan Hatchman, Food Editor, @TLE_Food Imagine breaking into the realms of your wildest dreams whilst retaining full self control. Multiply that by ten and you’d most probably have something in mind that’s similar to The Lecture Room & Library at Mayfair’s Sketch. In fact the art heavy interior is so otherworldly and bizarre that it’d […] 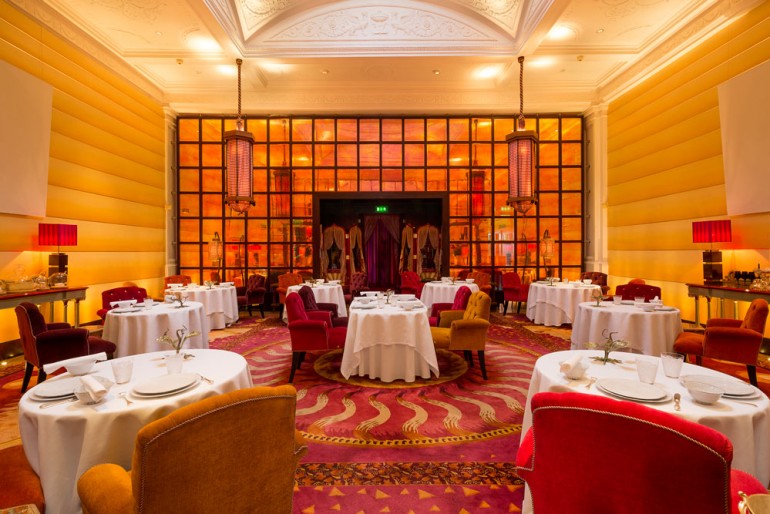 Imagine breaking into the realms of your wildest dreams whilst retaining full self control. Multiply that by ten and you’d most probably have something in mind that’s similar to The Lecture Room & Library at Mayfair’s Sketch. In fact the art heavy interior is so otherworldly and bizarre that it’d be no surprise to find Salvador Dali dining in one corner, stroking his gravity defying moustache while on the opposite side a man-size white rabbit sits casually checking his stop watch in between mouthfuls of luxurious French cuisine. In fact, the food that’s served up in the two Michelin-starred kitchen is just as exquisitely eccentric as the celebrated interiors, with canapés such as Squid Ink Sticks dipped in Thyme-infused Olive Oil and Gin jelly cubes served on a cocktail stick with olives and some texturally discerning lime peel, placed into a Martini Glass with a dash of Martini Bianco in place of a dressing.

Since opening at the end of 2002, French chef Pierre Gagnaire and restaurateur Mourad Mazouz’s Sketch has been the centre of plenty of appraisal, so having heard nothing but great things about the institution, we decided to head along to test drive one of the building’s three acclaimed restaurants. Downstairs there’s The Parlour and the all pink Gallery (the one with the famous pod toilets) that serves an incredible Afternoon Tea, so we’ve heard. Meanwhile, upstairs Lecture Room & Library with its Gourmet Rapide lunch is the one that caught our eye, and with three courses of two Michelin-Star food, half a bottle of Mineral Water, half a bottle of Wine, Coffee and Petit Fours for £53 all in, it’s very difficult to go wrong. As expected from a set menu, the selection is limited, yet there’s still something to suit just about everyone. For starters, there’s a combination of four dishes to taste, including a delicious Sardine and Cuttlefish dish that’s subtly accompanied by Fennel and Olives (both black and green), Semolina that features Spring Onion, Grapes and Pineapple that’s so strong, it does seem to outweigh the pristinely presented dish’s other elements. What’s more, as well as a Stiletto Aubergine and Mozzarella entrée, there’s also a bizarre glass of Watermelon and Sake Sorbet (although the main taste is Watermelon) that’s topped with Cereal-like puffed Rice.

On to the mains, there’s a choice between Fish (Pan-fried Pollok), Meat (Roasted Poussin) and Vegetarian (Open Ravioli), and although there’s absolutely nothing wrong with the main courses, each cooked and presented wonderfully, the presentation seems much more mind-blowing than the actual taste, so it comes as a shame that they don’t quite manage to excited us quite as much as the building itself. Although still satisfactory, they just don’t seem to come across as memorable as some of the City’s other restaurants with similar accolades. With dessert, my partner opted for the classic ‘Pierre Gagnaire’ Dessert, a combination of three enjoyable treats (Yoghurt Sorbet with Blood Orange, Confit Dragon Fruti with Lime Jelly andLemon Posset, and Coffee Parfait topped with Chocolate and Sugared Almond), but given the sheer amount to choose from, I couldn’t resist the alternative option: a Cheese board that features a selection of a huge 23 different Cheeses, all delivered to the table in order for the diner to make a selection, with each explained in depth by our knowledgeable waiter. The Cheese was most definitely the highlight of the whole meal.

The experience on offer at Sketch is most definitely recommendable. Although it’s the type of venue that you visit for the breath-taking interiors more so than the food (similar to The Shard’s Oblix or 20 Fenchurch Street’s Fenchurch Seafood Bar & Grill) you’d be hard pushed to find a lunch in a restaurant of this calibre anywhere else within the City, especially at this end of the Monopoly board.

Sketch can be found at 9 Conduit Street, London, W1S 2XG.