After Simon Rogan parted company with Fera at Claridges last year, London suffered a brief, unquenchable thirst for the much celebrated cooking served at the chef’s two Michelin starred L’Enclume in Cumbria. (Apart from the eight-seat Aulis in Soho, serving a £195 tasting menu). With L’Enclume, the chef was simply a big fish in a […] 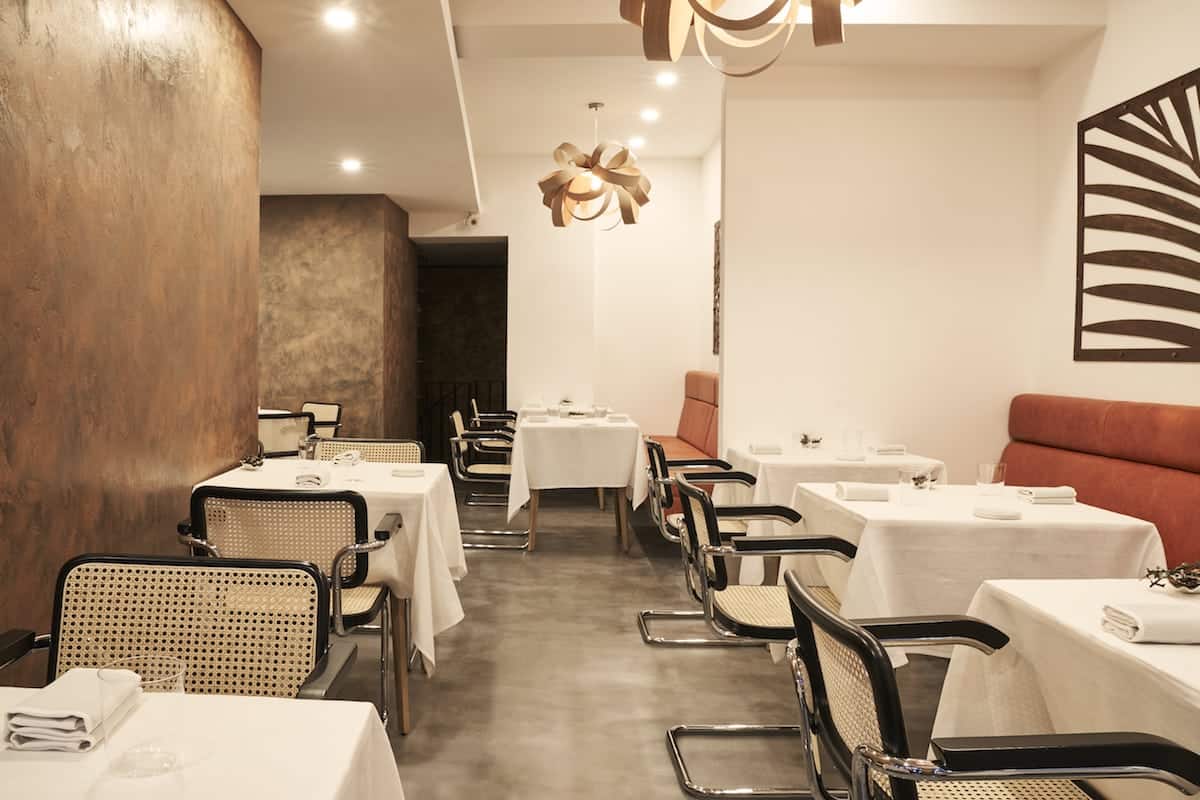 After Simon Rogan parted company with Fera at Claridges last year, London suffered a brief, unquenchable thirst for the much celebrated cooking served at the chef’s two Michelin starred L’Enclume in Cumbria. (Apart from the eight-seat Aulis in Soho, serving a £195 tasting menu). With L’Enclume, the chef was simply a big fish in a comparatively small pond; not to detract from the restaurant’s brilliance. With the recent opening of Roganic – on Blandford Street, just off Marylebone High Street – the chef remains a big fish, but in a much larger pond. A city boasting so much competition; so much critically-acclaimed contemporary fine dining; so many dramatically less remarkable chain restaurants. And with so much competition, it can become challenging to avoid falling beneath the radar. To avoid such tragic fate, a restaurant must be either unfalteringly brilliant, or mind-blowingly different. Roganic ticks both boxes.

Originally conceived as a two-year pop-up, Roganic is far more serious than the punning name suggests. Inside, the restaurant is somewhat taciturn. Polished concrete-style floors are matched with brushed copper walls festooned with metal artworks hanging above the burnt orange banquettes and heavily-starched table linen. What the space lacks in warmth, however, is compensated by earnest, charming service that’s genuinely refreshing in such an institution. As for the food, head chef Oli Marlow (having previously worked at L’Enclume and Roganic 1.0) serves a menu of modern British food with a distinct fine dining slant. Particular focus is paid to British suppliers such as Simon Rogan’s Our Farm in the Lake District. At dinner, a full tasting menu (£95) is available alongside a ‘short tasting menu’ (£75). During lunch service, a six-course business lunch menu is comparatively sensibly priced at £40 per-person – served over the course of an hour or so.

At Roganic, much of the food is fiddly, but is refreshingly devoid of egocentricity. Instead, Simon Rogan’s food is designed for foodies rather than the plutocratic crowds that loiter in so many tasteless restaurants in Mayfair, less than a mile away. Dishes are brought to the table with a brief explanation of the various processes involved in crafting each mouthful. A tiny preserved raspberry tart is a pre-starter dessert, of sorts, harbouring an explosion of flavour which awakes the palate: sweet, tart, sour. This is served alongside a goldfish bowl of fermented beetroot and apple juice that would cause mild hysteria amongst the health-conscious crowds in Los Angeles.

A pretty dish of sea trout comprises cured slivers of fresh, firm fish beneath a mound of foliage and sliver of apple. This all lulls in a pool of vivid green sauce made by combining apple juice with slightly bitter sorrel to delicately contrast the fish. The business lunch menu’s lamb main, on the other hand, champions three different cuts: rump, loin, shoulder. Each cut is cooked technically well, but it’s the terrine of shoulder which works as the unexpected jewel in this dish’s crown. Topped with broad beans and courgette slices, the lamb is glazed with anchovy which lends a pleasant brackish undertone. On the side, a quenelle of dehydrated courgette puree is vivid in both colour and flavour.

To finish, a contemporary tarte tatin features apple sliced with a mandolin then rolled back into shape – like a fruit Winder. Each layer is deeply caramelised, based with a puff pastry casing and served with Douglas Fir ice cream. The ice cream doesn’t divulge much flavour, but the apple tart is a masterpiece. This is followed by a bowl of juniper fudge (it tastes unsurprisingly similar to gin), acting as an unusually memorable example of petit fours.

Unlike much of the city’s contemporary fine dining from chefs as decorated as Simon Rogan: none of the food served at Roganic comes off as being arrogantly cheffy. Instead, lunch is technically excellent. I’ve already booked a return visit, excited to sample the restaurant’s dinnertime tasting menu.

Roganic can be found at 5-7 Blandford Street, London, W1U 3DB.