Unlike Burger & Lobster, Bao, Duck & Waffle and other popular restaurants with names that showcase their signature (and sometimes solitary) dishes – there is not a pea in sight on the menu at Petit Pois Bistro. Opened just a few months ago, the restaurant is a new venture from the team behind successful cocktail […] 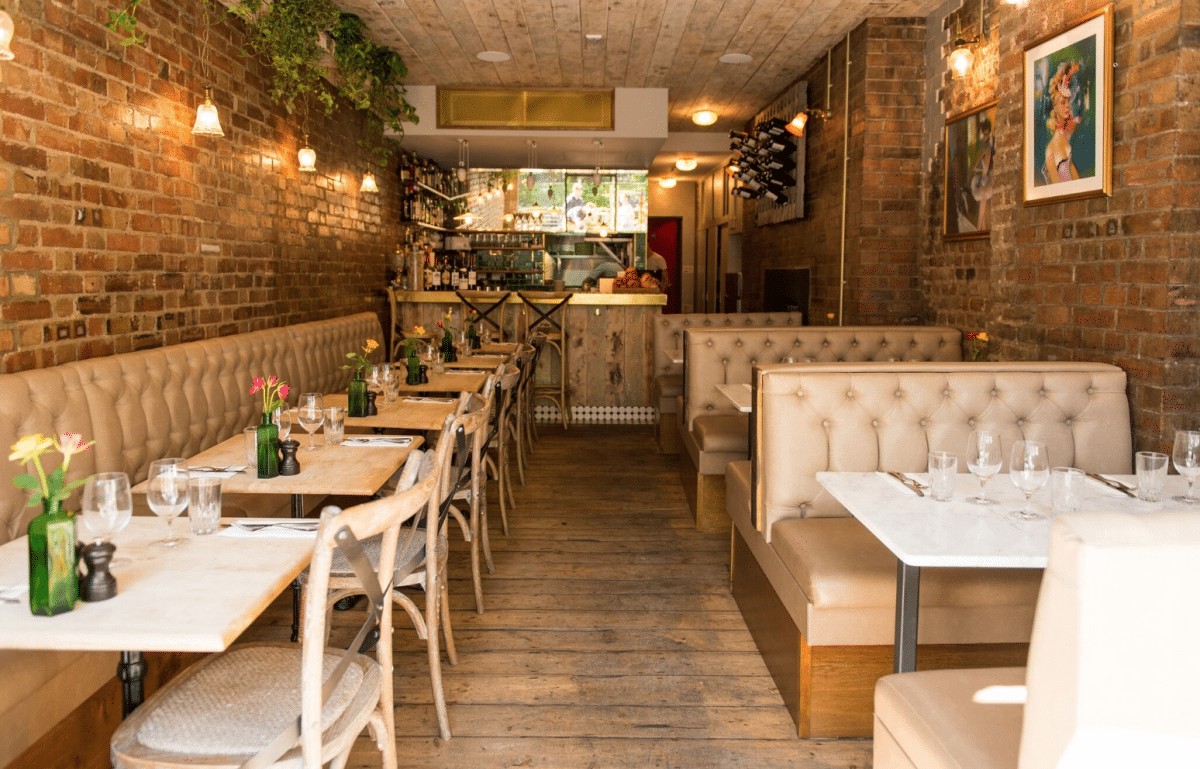 Unlike Burger & Lobster, Bao, Duck & Waffle and other popular restaurants with names that showcase their signature (and sometimes solitary) dishes – there is not a pea in sight on the menu at Petit Pois Bistro.

Opened just a few months ago, the restaurant is a new venture from the team behind successful cocktail bars Happiness Forgets and Original Sin, “tired of all the new restaurants in London being either super fine-dining, or gourmet fast food.” Taking over a tiny space on the corner of Hoxton Square, the 25 cover dining room is extremely informal and looks as though it has been dragged kicking and screaming across the channel with its exposed brick walls, French pendant lighting and chairs very similar to those famously painted in Casa Van Gogh.

As for the food, the restaurant showcases the sort of classic French cooking that’s seldom seen within restaurants in the UK, particularly the opulent gastro temples that fill the Michelin guide. To start, Moules Mariniere offered a bowl of mussels that had been cooked and cleaned properly, bathing in a pool of sauce the colour of dirty dish water. Although unappetising on the eye, the liquid had bold flavours of wine and sweet ripe tomatoes, working in harmony with the shellfish’s natural salinity. Also quite brilliantly, the dish was served alongside a finger bowl: an unwritten invitation to contact our primitive side and eat with our fingers. Blue cheese soufflé, on the other hand, resembled a fluffy Yorkshire pudding that had been slightly burnt on top. Conversely, the dish delivered a level of indulgence bold enough to compete with the city’s finest available cheese soufflés, all without the potency of blue cheese overpowering the otherwise delicate dish.

A classic brasserie dish of steak frites favoured a cut of flat iron (taken from the cow’s shoulder) instead of the traditional rump, or even common entrecôte. A cheaper “off cut” of beef, flat iron is a marvellous steak that, if prepared properly, is almost as tender as expensive fillet, yet with far more marbling that results in a depth of flavour that’s infinitely superior. While the steak had been cooked to a perfect medium-rare, the meat was disappointingly tough – possibly due to careless butchery, with the improper removal of the gristly fascia membrane. Elsewhere, the accompanying fries retained some of the potato skin which added pleasant depth of flavour, and a pot of béarnaise sauce was all the better for its heavy handed addition of tarragon.

Far better was a leg of confit duck that had spent the past few hours submerged in hot fat. As a result, the skin was crisper than a new polymer five-pound note, the meat fell from the bone with little need for cutlery and the flavour delivered all of the richness and decadence expected from a menu so quintessentially French. The same can be said for a cast iron ramekin of gratin dauphinoise, comprising slivers of potato that had been cooked in an unhealthy (read: delectable) amount of cream and topped with hot melted cheese.

Since opening, the chocolate mousse dessert has received an onslaught of justified praise. Served from a mixing bowl that looks as though salvaged from 1942, the mousse was topped with a sprinkling of bitter cocoa powder. This worked surprisingly well in contrast with the ludicrously sweet dessert that’s not dissimilar to the most perfect raw cake mixture, promptly resurging so many fond childhood memories. It is not merely nostalgia value that makes this dessert so exceptional, nonetheless: it is the simplicity, the smoothness, and the perfect balance in quantities of heavenly chocolate, cream and egg yolk. Had the portion size been less sizeable, I may well have insisted on elongating the nostalgia trip, gluttonously licking every last trace from the mixing bowl’s surface.

Though not all dishes are the absolute ‘crème de la crème’ of Bistro cooking, the food is served with a certain rustic charm, presenting itself as more of a warm hug than a snooty grimace at even the slightest incorrect pronunciation of dishes from a menu prestige. What’s more, it seems very much as though that’s the scrupulous intention, ultimately making Petit Pois a fine new addition to the seemingly endless list of Hoxton restaurants.