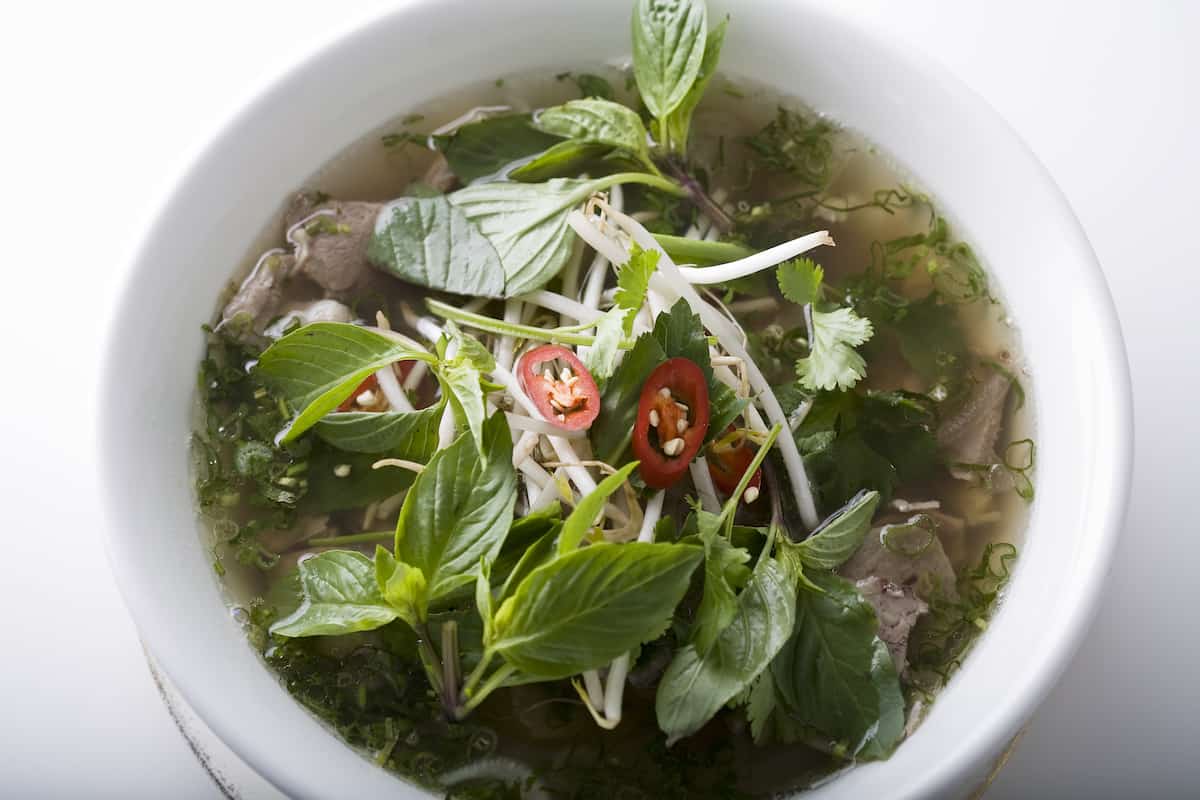 Standing out from the plenitude of Vietnamese restaurants contributing to east London’s ‘Pho Mile’, family-run Mien Tay launched in 2008 and has since opened an additional three restaurants around London.

Named after the family’s home region around the Mekong Delta and its cuisine, the restaurant group serves Vietnamese cuisine deeply rooted in home-style cooking from the country’s south-west. With the Mekong Delta acting as Vietnam’s most important fishing region, it’s thus unsurprising that the restaurants’ long menus pay particular attention to fish and shellfish, teamed with authentic ingredients synonymous with the area. Southern classics such as Bánh xèo or hot and sour Canh Chua soup are also championed. Complementing the breadth of dishes available, Mien Tay’s accessible wine list has also been specially curated with the intention of pairing different wines with different dishes.

A short walk uphill from Clapham Junction, Mien Tay’s second restaurant operates from a space with two floors. Inside, the décor is somewhat unexceptional: unsympathetic lighting amplifies the ramshackle design and a mirror dominates much of the wall space. Tables are closely packed (each curiously housing a mini-tableau of village scenes, housed beneath glass)     which lends a somewhat social ambience to the busy dining room, already crowded at seven o’clock during a mid-week dinner visit. Space aside, service is warm and present without being overly fussy, while the food served is the key stand out here. It’s also worth noting that the restaurant accepts cash only – with various cash machines dotted around the area.

A recent dinner began with a large plate of four spring rolls (£5.30) alongside a bowl of perfunctory prawn crackers. Filled with taro root, dried fungus, onion and carrot, the spring rolls had textured wrappers, deftly fried and well-seasoned, served alongside a melange of pickled vegetables. Elsewhere, strips of firm, pressed tofu (£7) were stir fried and paired with a rich, tangy sauce of tamarind and red onion, ultimately providing a dish with particularly well-balanced flavours.

From the sea, salt, pepper and garlic squid was an uncommonly adroit example of a dish that’s become familiar with even the least adventurous of Brits. Here, the hunks of squid were cloaked with light batter, generously seasoned and relinquished from the fryer before becoming tough. Spicy soft shell crab was also fried, with the carapace covered with spiced bread crumbs, accompanied by sweet chilli sauce. A simple yet remarkably comforting dish, offering tremendous value at £9.50 for two crabs.

Another specialty of southern Vietnam, Mien Tay’s superlative king prawn curry (£9.70) was cooked in a claypot, traditionally used by farmers and fishermen with little to cook, few pots to cook in and a small amount of fuel for cooking. Here, the curry was rampant with aromatic lemongrass, garlic and chilli, with the spicing slightly restrained by a splash of coconut cream. An unassuming dish of stir fried goat (£8.70), was another hero, featuring strips of marinated meat quickly charred over a high heat with a dash of spiced coconut sauce and onions, enlivened by fistfuls of fresh galangal. A glorious highlight from dinner at Mien Tay – an admirably authentic south-western Vietnamese restaurant in south-west London.