With the popularity of Mexican food having soared in recent years, it’s disappointing yet unsurprising that we’ve been subjected to so many culinary atrocities that pretend to be Mexican. In fact, thanks to a plague of simply foul Tex-Mex chain restaurants operating across the capital, many city dwellers have been led to believe that Americanised […] 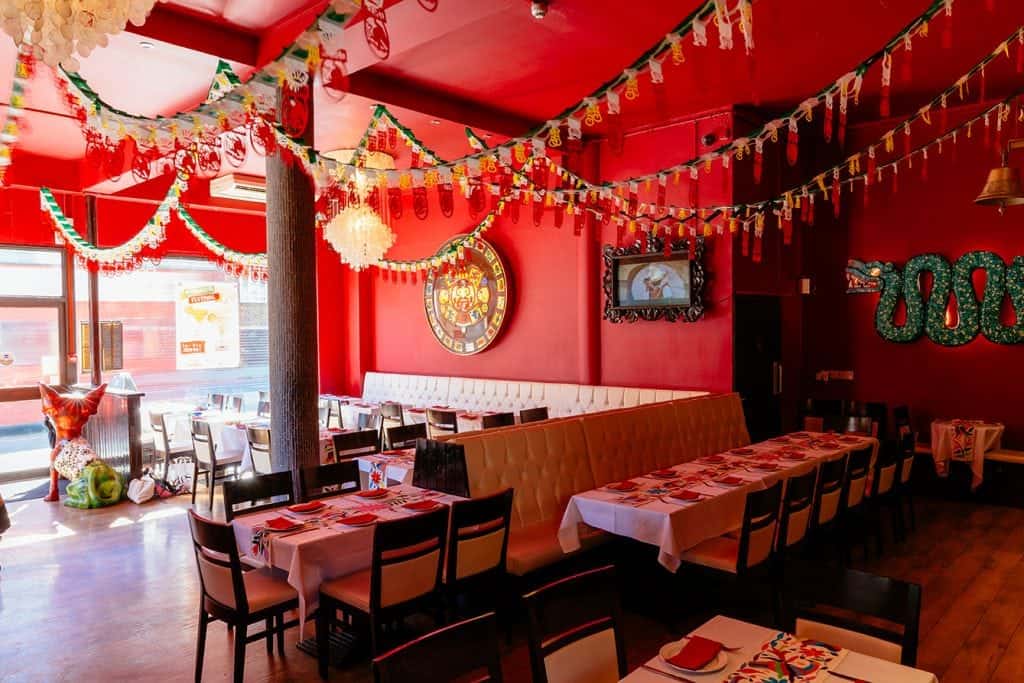 With the popularity of Mexican food having soared in recent years, it’s disappointing yet unsurprising that we’ve been subjected to so many culinary atrocities that pretend to be Mexican. In fact, thanks to a plague of simply foul Tex-Mex chain restaurants operating across the capital, many city dwellers have been led to believe that Americanised soggy burritos, crispy taco shells and lactic guacamole are the pinnacle of Mexican cooking.

Operating from a neglected thoroughfare between Euston station and Camden Town, Mestizo, however, has been serving authentic Mexican food to hungry Londoners since 2004. Like all of the best Mexican restaurants in the UK, inside the scarlet space is flamboyantly decorated and straddles the fine line between kitsch and tacky. Upon taking our seats, a waiter introduced a wooden block, half red and half green, resembling a discoloured anti-biotic, intended to be used for alert waiting staff. Although useful to some extent, the ‘traffic light’ block is the physical equivalent of snapping one’s fingers to gain attention, like a spoiled brat, and feels unnecessary.

As for the food on offer, the main menu offers a melange of humble dishes that epitomise traditional Mexican cooking, unsurprisingly paired with one of London’s most impressive selections of tequila and increasingly trendy mezcal, with a cocktail list exclusively favouring these spirits. A tequila sour exemplified a classic cocktail that had been made simply, albeit well, while a contemporary habanero margarita delivered an aggressive punch of spice to work in surprising harmony with the tequila base.

Another highlight of Mestizo’s food is the regularly revolving menus. During our visit, a menu of regional delights in celebration of Mexican Independence Day was on offer, while later this month a Dia De Los Muertos-focused menu will offer a range of regional moles (pronounced ‘moh-lay’). To start the Independence Day-themed dinner, a bowl of nacho chips had a stale texture similar to that of an open box of cornflakes that had been neglected for the past two years. The accompanying tomatillo salsa, on the other hand, was delightful as an initial dive into the bold flavours and spices that were yet to come.

Next, from the starters section, ‘Empanadas Chiapanecas’ featured succulent shredded pork, tomato, onions, hard-boiled egg and cloves, and Campechan Empanadas De Cazón were filled with flaked white fish, epazote (‘Mexican tea’), tomato, olives and capers. Both pairs of corn pastry parcels had been deep fried and delivered a deep flavour profile and a sort of rustic, street-food charm typical of traditional empanadas. A main of Enchilada Tapatías featured slow-cooked chicken served with soft corn tacos and a smoky ancho chilli sauce, inspired by the cuisine of Jalisco. It was the Oaxhacan Mole Amarillo that was the most exciting main course of the evening, conversely. Favouring a huge lamb shank instead of typical chicken, the meat had been cooked in a ‘yellow mole’ stew with various herbs, slightly sour tomatillo, green beans, chayote and Guajillo chilli and was delightful. A classic Mexican dessert of tres leches cake was made, as is typical, with three types of milk: whole, condensed and evaporated. Although the sponge’s high air content prevented the cake from becoming soggy, what with all of the liquid, the dish’s highly lactic flavour is certainly an acquired taste.

After twelve years of service, Mestizo continues to provide authentic, modestly priced Mexican food, with almost all of the main courses falling at below the £20 mark. The restaurant’s admirable selection of Tequilas and accompanying cocktail list, alone, is also well worth a visit.

Mestizo can be found at 103 Hampstead Road, London, NW1 3EL.