By Jonathan Hatchman, Food Editor, @TLE_Food Just over a year ago, Martin Williams formerly of of Gaucho, opened his first solo venture ‘M’ within the heart of the city’s square mile on Threadneedle Street. Split into two concepts, both M Grill and M Raw, the single dining space offered two menus for diners to choose […] 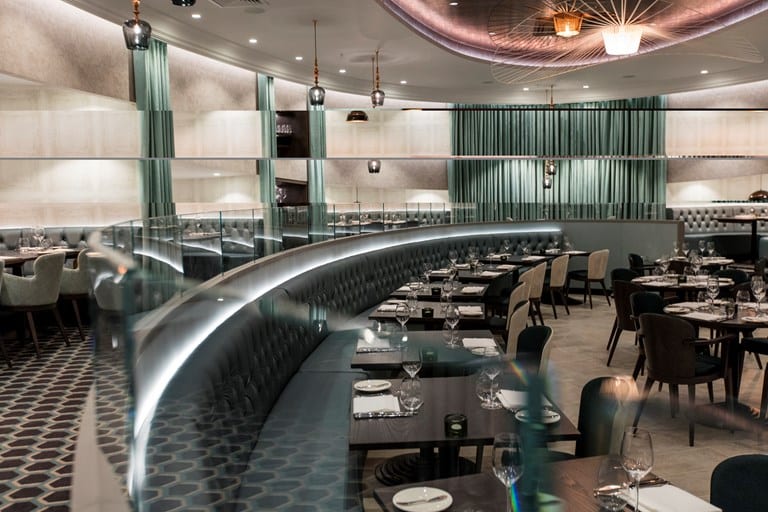 Just over a year ago, Martin Williams formerly of of Gaucho, opened his first solo venture ‘M’ within the heart of the city’s square mile on Threadneedle Street. Split into two concepts, both M Grill and M Raw, the single dining space offered two menus for diners to choose from, while a bar upstairs was on hand to provide drinks for the legions of city slickers that would pour into the restaurant after hours. Having visited very soon after the restaurant first opened, it’s fair to say that my visit to the Threadneedle space was not the most enjoyable – it seemed that there was a strong focus on style over substance, dabbling in pretension, and the general clientele didn’t help to fight M’s cause. Some of the menu options (from the Raw side) did also fail to work in harmony and to enthral either myself or my companion at the time. However, I haven’t returned since and things may have changed drastically. Fortunately, a recent visit to the newly opened branch of M in Victoria Street managed to whole-heartedly restore my faith in the brand, proving very likely that Threadneedle’s faults were a number of small teething difficulties. Lunch at the new Victoria venue, however, was in fact quite magnificent.

Situated on the corner of the Zig Zag building, the restaurant’s exterior is misleading of the venue’s sheer size. Upstairs a wine shop comprised of wines difficult to buy outside of restaurants, albeit at a fraction of the price, is joined by a small reception desk and a wine bar. Downstairs, a grand bar area leads through to the sizeable sashimi bar, or indeed through into the main restaurant space. One thing that’s particularly noticeable about the space is the remarkably stylish interiors down to every specific detail that set the restaurant apart from others. While the Threadneedle venue is so predominantly masculine the testosterone levels breach on fatalism – this new restaurant is far more accessible for all (if anything, it’s even slightly feminine), while the cool teal colour scheme lends an almost underwater feel to the place.

Again, the menu is split into ‘Grill’ and ‘Raw’ sections, with most of our meal chosen from the latter. On the grill side, there’s a strong focus on Beef, sourced from six different countries, although none British – quite sadly given that I’d pick Scottish over USDA at any given time. However, aside from the beef, there’s also some less popular meats alongside. Venison salami is cured onsite and sliced into thin slivers, topped with whole hazelnuts; similar to dried biltong, albeit gamier, far tastier and with a texture that’s much more pleasant. A crisp of puffed beef was texturally similar to a prawn cracker and joined with a potent smokiness, although the seasoning was slightly excessive. Sashimi of tuna featured three wedges on fresh mauve fish with that almost clinical taste working beautifully alongside the heavy soy sauce and wasabi, then followed by refreshing pickled ginger and daikon. Three slivers of cured trout were prettily presented in a bowl of creamy buttermilk with a vibrant pear gel floating upon the surface. Again, the subtle taste of the fish was sensational, although a little too much buttermilk worked as a safety blanket, suppressing the delicate fish’s wonderful taste.

Kanagroo tartar is the type of dish that, on paper, instils slight trepidation in many diners. Conversely, it’s one of the finest things that we ate at M. No, it was the best thing that I’ve eaten this year, thus far. An artful tower of raw meat garnished with wafer thin shavings of mushroom, slightly peppery nasturtium petals, and a very slight note of egg yolk. Apart from beguiling taste of kangaroo, the most promising aspect of the dish was the meat’s texture, chopped instead of minced, and superiorly tender – especially compared to the often toughness of the meat once cooked due to its leanness. If only we’d ordered more than one portion of the dish to share. Chosen from the hot section of the menu, bao buns were also sensational; “like healthy burgers…”, our waiter expounds, “but order one each as they’re far too good to share.” He was right. The pork option was cooked well, sticky and sweet, accompanied by a kimchi mayonnaise with a good balance of piquancy from the kimchi, then muted slightly by the mayonnaise. On the other hand, the fried soft-shell crab bao was heightened by the crispiness of the well seasoned crab, albeit drier and slightly greasier than the pork alternative, all thanks to the fryer no doubt.

Following the onslaught of savoury, puddings on offer here are absolutely inspired. Having been promised that the flavours do work together, the dulce mousse was fortuitously exceptional. The main component of creamy caramel mousse worked as a topping for a faintly saccharine sweetcorn ice cream, buckwheat and a smattering of crisped bacon for crunch and a touch of saltiness to accentuate the caramel. On paper, the combination sounds catastrophic, although the balance of bold flavours worked tremendously well. Further proof that we should never knock even the most adventurous concoctions until having tasted at least once.

Thanks to one of London’s busiest stations and a rapidly expanding multitude of office space, Victoria is one of the city’s busiest areas – though it’s far from famed for its restaurants. The newest outpost of M Restaurant is easily the area’s best new restaurant, though the statement does it no justice. Although the prices of the small plates gradually mount up to a particularly high sum, the quality of the food, service and the additional wine shop makes for a truly brilliant new addition to an area that’s readying itself for plenty of regeneration and exciting new openings throughout the coming months.