One of 2018's most revered restaurant openings, and for good reason. 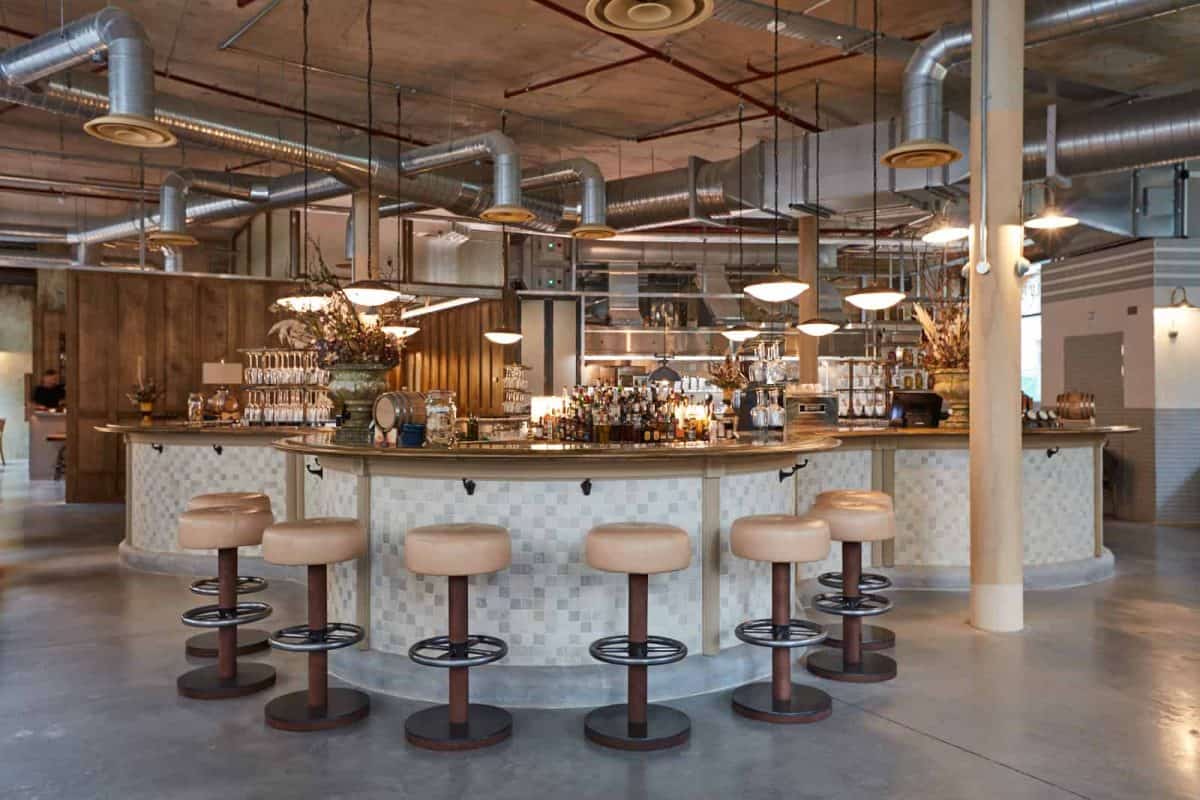 Opened towards the end of last year, LINO was quick to become revered as one of the best new restaurant openings of 2018.

Tucked away between St Bartholomew’s Hospital and Barbican Station, the restaurant occupies a former linoleum warehouse – hence the name – and has a modern “re-use, re-love and re-imagine” philosophy at its core. In the kitchen, head chef Richard Falk (having most recently worked as head chef at The Dairy in Clapham) supervises an all-day menu with a prominent focus on reducing food waste. Sourdough bread is baked on site, butter is cultured in-house, charcuterie is cured on the premises and left-over pastries from breakfast are utilised in desserts such as croissant ice cream. Fresh produce is, of course, sourced as seasonally and sustainably as possible.

Inside, the huge space is dominated by a large central bar lined with shelves stacked with spirits and jars of house ferments to be used throughout the drinks list. In addition, the space has a pronounced chic industrial accent with plenty of overhead air vents and exposed piping, original glazed tiles and brass fixtures joined by soft pastel velvet upholstery in shades of powder blue, peach and dusty pink. The floor is, in fact, polished concrete with no linoleum in sight. (Let’s be honest, nobody born after 1942 chooses lino as their go-to flooring).

In accordance with the comfortable space, service is charming and pointedly accommodating, with servers keen to make recommendations and enthusiastically discuss specific dishes on the menu. The restaurant’s drinks list is also worth mentioning, with a fair selection of wines available and bottles starting at £23. There’s also a Chianti Classico from Fontodi and a Sicilian orange wine, both of note.

A recent lunch began with a ‘Sour Bush’ – the bar’s take on a classic sour, using a base of gin alongside absenteroux, rosemary, lime and a whisper of honey, followed by a dish of buttermilk fried chicken (£6) cloaked with a thin, craggy batter and plunged into seething hot oil until perfectly golden, with the flesh remaining favourably succulent. On the side, buttermilk mayonnaise complements rather than overwhelms. A modest dish of scorched Cornish mackerel (£7) was another highlight: quickly grilled until the skin blistered and simply served with a blob of Porthilly oyster mayonnaise and discs of pickled cucumber.

An elegant dish of roasted Gigha halibut (£24) harboured a tranche of well-cooked fish lounging on a bed of fondant leeks and a glorious crab bisque, capped with a handful of samphire. Even better was the Middle White pork chop (£20): a huge slab of pig expertly cooked, still blushing, with the fat rendered exceptionally, still served on the bone. Possibly the best-cooked pork chop I’ve ever eaten, and there have been many. On the side, an aggressively charred wedge of Hispi cabbage brought some perfunctory veg to the meal, embellished with bacon crumbs and the LINO barbecue sauce was far less disastrous than its name suggested, instead rampant with apple and some feint smokiness, demanding to be mopped up with supplementary triple-cooked chips (£4.50). Another hit, LINO’s nectarine and frangipane tart (£7) was grasped by a rich, brittle croissant base, capped with a rocher of crème fraiche ice cream. Another must-try.

LINO can be found at 90 Bartholomew Close, London, EC1A 7EB.