Though so many of London’s Thai restaurants are unapologetically bad, the popularity of Thai food (as well as Vietnamese) is currently booming. So, considering London has one of the world’s most diverse restaurant scenes, it’s astonishing that Laotian food has taken so long to become established throughout the city. It’s undeniable that Lao cuisine has […] 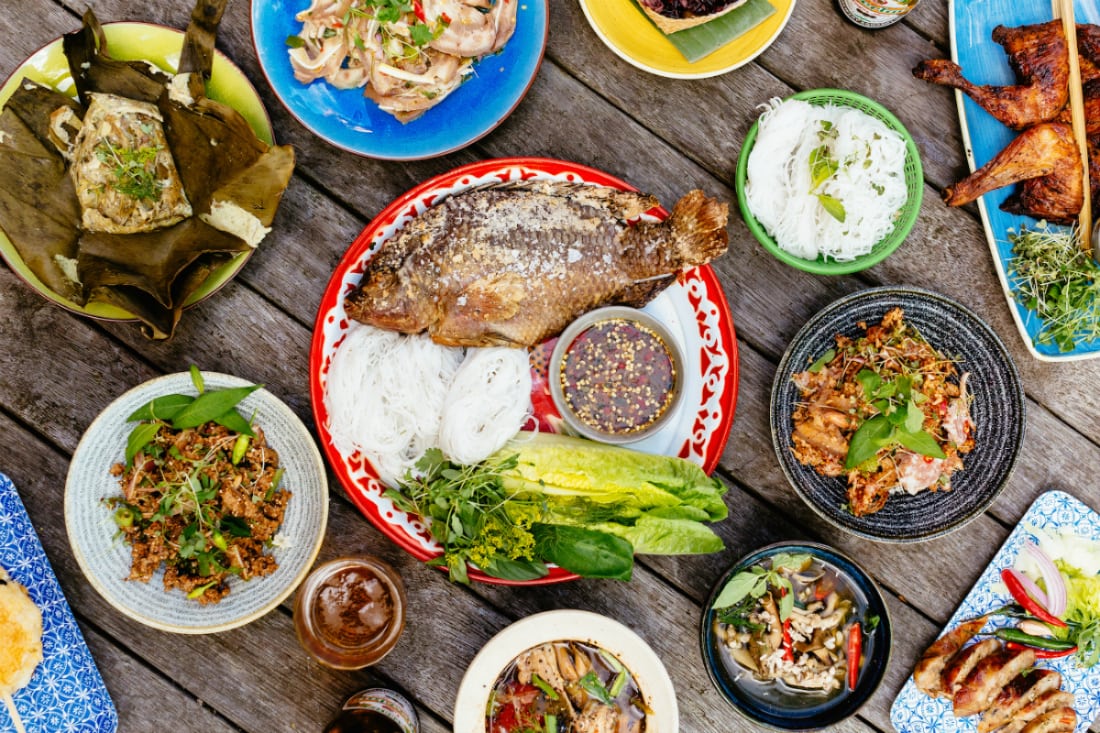 Though so many of London’s Thai restaurants are unapologetically bad, the popularity of Thai food (as well as Vietnamese) is currently booming. So, considering London has one of the world’s most diverse restaurant scenes, it’s astonishing that Laotian food has taken so long to become established throughout the city.

It’s undeniable that Lao cuisine has contributed significantly to Thai food becoming an international phenomenon, yet so few menus throughout Europe give the landlocked country between Thailand, Vietnam and Cambodia any deserved credit. Initially set up as a wildly successful pop-up near Victoria Station, Lao Café is the latest project from Saiphin and Alex Moore – the team behind Rosa’s Thai Café, with a new permanent space in Covent Garden. Although Head Chef and co-founder Saiphin Moore grew up in northern Thailand, her family originate from Laos and continue to embrace their traditional food and cooking methods.

I’d be lying if I said I was in love with Rosa’s Thai Café after my first visit to the Spitalfields restaurant. In addition to a number of generally underwhelming dishes, most staff members were less than hospitable and the acoustics were so poor that noise levels were beyond tolerable. Frankly, I’ve been to quieter thrash metal gigs. Inside Lao Café’s shiny new space, bright street art adorns the walls, light bulbs hung with shades that resemble birdcages and, like Rosa’s, there’s plenty of bare, hard wood furnishings. The different here, though: we can actually hear each other speak (perhaps unfortunately for my companion), without the need to bark across the table.

Unsurprisingly, the food is wholly Laotian. To begin, Sai Gork Lao (£8) – hunks of fermented pork sausage – has a fair degree of piquancy, gently awaking the palate. The pork is cooked remarkably well, still ever-so-slightly pink, and is accompanied by some slices of simple, refreshing ginger. Similarly, Jee Moo (£8) has a subtle spiciness. Skewers of minced pork are aggressively grilled over charcoal, developing a bitter scorched crust that contrasts some of the meat’s underlying sweetness.

Thai-style papaya salad comes with a choice of two varying levels of spiciness. Generally unafraid of spice, I insist we order the hotter Tum Thai (£8.50). Shredded green papaya is rubbed with salt and sugar to add a cucumber-like taste to the mild fruit, tossed together with some shredded carrots, spring onion and tomato. This is then dressed with a generous lashing of soy sauce and a heavy-handed pinch of chilli. On the first mouthful, the taste is blissful – subtle but wholesome and fresh, followed by salty notes of soy and a faint hum of chilli. Then, all of a sudden, the dressing’s sly heat develops into an aggressive assault on the senses, forcing immeasurable amounts of fluid to pour from my tear ducts and nostrils. Sure, order the dish to vaunt your fearlessness by all means, but beware. I’ve never been so grateful for a glass of ice cold lager – Lao Beer, which is more of a slightly sweet pilsner. It’s an ideal table beer, refreshing and pairs perfectly with spicy food.

Pla Pao Gluer is by far the best thing eaten here, and an absolute steal at £17. A large tilapia (intended for two to share) is encased in a tomb of salt and, like the pork starters, grilled over charcoal until the salt burns. Fresh from the grill, the fish then arrives at the table as a whole entity, with the head still attached (allowing access to the divine, salty cheeks). Under the salt-encrusted skin, the fillets of flesh are astonishingly succulent, without too much salt having made it past the skin. It’s also surprising that the fish is cooked so well when considering the cooking conditions, so difficult to control. The flavour boasts a brackish, almost muddy taste. This comes with some vermicelli noodles, an aubergine and chilli dip, and a simple herb salad of Thai basil and coriander, which cuts through the potency of the fish. It’s the sticky rice (£3), however, that although simple, is the most enjoyable accompaniment. The rice is wrapped in a banana leaf and served in a mound so dense that it’s easy to eat without cutlery, as is traditional in Laos.

No desserts are available, so we order another round of beers. Besides, following the taste explosions of each dish that brings Laotian cuisine kicking and screaming into the city – no sweet dishes spring to mind as appropriate. Alongside offering brilliant value for money, the food at Lao Café is generally impressive. It’s also the only restaurant in central London dedicated to Laotian food – for now, at least.