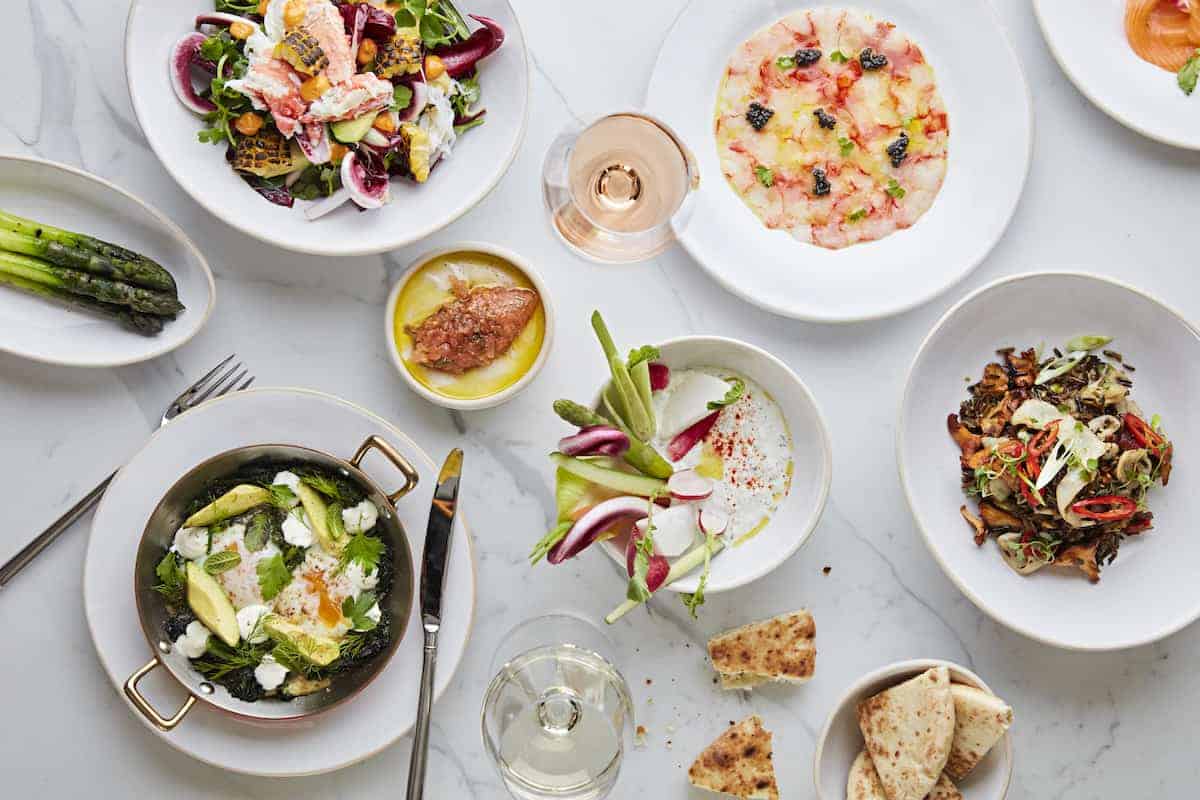 Famously the fictional home of Sir Arthur Conan Doyle’s Sherlock Holmes, Baker Street is home to a constantly growing number of operations named with nods to its most famous resident. Some better than others.

Within the Holmes Hotel, Kitchen at Holmes is an unusual hotel restaurant of note – not just a mere stop-gap for hotel guests to fuel-up each morning before heading out to investigate the city’s attractions. With its expensive herringbone floors and general palette of muted greys, the restaurant does fit the typical hotel blueprint, yet the service is considerably less stuffy and the food is a great leap away from fussy hotel dining. A good thing. Nods to Baker Street’s most famous resident are prevalent throughout the space, but they’re subtle enough to prevent Kitchen at Holmes from projecting itself as a tacky theme restaurant. The drinks menu, for instance, features a drink named ‘Sherlock’s Pipe’, described as a take on a classic Negroni yet featuring Scotch whisky – served in a glass pipe and infused with Applewood smoke that complements the bitter notes of Campari.

The large food menu, on the other hand, is split into sections such as ‘Raw’, ‘Fritti’, ‘Grill’, ‘Aged and Smoked’. While looking through the menu, we ate strips of pillowy Jerusalem pitta, served with a delicious mess of tahini, roasted tomatoes and extra virgin olive oil. The menu’s ‘Raw’ heading is home to some of the most impressive dishes. Scottish Black Angus carpaccio featured paper-thin slices of beef, served at an optimum temperature, generously seasoned and loaded with slivers of black truffle. The dish over-reached with the unnecessary employment of foie gras, however. Showcasing some technical skill (frozen and grated over the dish, not unlike dried Sardinian bottarga, I believed), the foie gras brought very little, if any, flavour to the otherwise impressive dish. Red prawn carpaccio was similarly striking, simply embellished with a drizzle of olive oil, plus a suggestion of Amalfi lemon and small heaps of Oscietra caviar.

Even better was a dish of thinly-sliced scallops, fanned-out across the plate and joined by thin ribbons of asparagus and radish, finished with a small basil leaves and a whisper of chopped Jalapeño, demonstrating an exceptional balance of complementary flavours: a rarity in even some of the city’s most critically-acclaimed kitchens. A must-order. A dish of deeply umami smoked eel was another highlight, joined by some hunks of heritage beetroot, golden beet puree, plus both horseradish cream and a pinch of grated horseradish root. A holy trinity of ingredients prepared with elegance.

Ravioli stuffed with milky buffalo ricotta was a far heavier dish, reading like a comfort food staple essential for a winter lunch visit, lashed with a heavily emulsified, sunshine-yellow butter sauce and finished with coins of black truffle, albeit expensive at £19. Better was a dish of pluma de Iberico, however, gently seared and served medium-rare (as it should be), accompanied by grilled Padron peppers and a nutty romesco. On the side, bok choy was stir-fried with plenty of chilli, ginger and garlic: not ground-breaking, by any means, but enjoyable. To finish, dessert lovers will be enthralled by the likes of the chocolate and orange ‘fiesta’, featuring a rich chocolate cake with a runny orange centre, garnished with candied peel and joined by a rocher of restorative yoghurt ice cream.

Somewhat let down by its name, Kitchen at Holmes is a hotel restaurant of unusual virtuousness – far, far better than it needs to be.

Kitchen at Holmes can be found at 108 Baker Street, London, W1U 6LJ.