Wyndham Hacket Pain @WyndhamHP In many ways Jane Jacobs is rather an unassuming figure. For much of her life she was dismissed as merely a house wife and had to fight to be heard at time when the gender divide was much greater than it is now. Yet despite never holding an academic position her […] 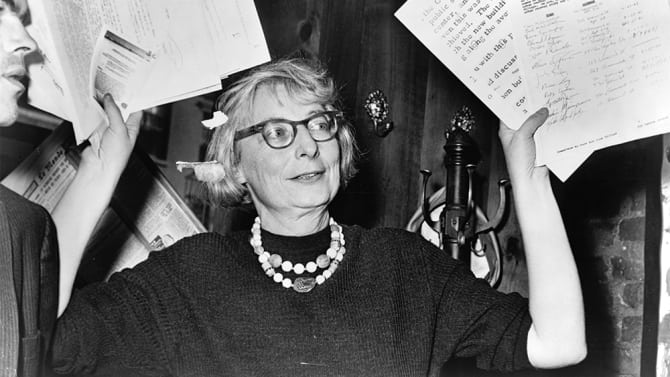 In many ways Jane Jacobs is rather an unassuming figure. For much of her life she was dismissed as merely a house wife and had to fight to be heard at time when the gender divide was much greater than it is now. Yet despite never holding an academic position her book The Death and Life of Great American Cities still remains one of the most influential books ever written about urban areas. Apart from being required reading for me while at university, it was the basis for protests against proposed planning developments in New York during the 1960s.

Citizen Jane focuses on these protests and the role that Jacobs played within them. What plays out is a battle between two contrasting visions of New York and modern urban life. On one side there is the Tump-like urban planner Robert Moses who envisages city life reconfigured around high rise flats and large motorways. On the other is author and activist Jane Jacobs who stands in opposition to the planners attempts to homogenise the city, as well as the corporate beliefs and logic that underpin it.

For Jacobs cities were not fundamentally about buildings but instead people and she wanted to protect the social lives of those who lived there. In the years following the Second World War, Moses had already transformed much of the city by gutting many of its poorest areas and erecting concrete-slab housing projects and superhighways, and Jacobs wasn’t going to let him do the same to her beloved Greenwich Village and lower Manhattan.

As someone who had only previously engaged with Jacobs in university libraries and lecture theatres, I enjoyed the way the film focuses on her activism and the life that her ideas had outside her books. I had seen the opposition to modern planning within her writing but the film brilliantly examines how she stood up to the planning tycoons and gives a personal quality to her work. City development may seem like rather a dry subject matter but in Jacobs the filmmakers find a charismatic and engaging guise for the issues at hand.

This is all helped by a strong and clear central narrative that takes you through events. The film is brilliantly structured and a story that could have been messy and jumbled ends up being well thought-out, with each point leading naturally onto the next. The real life events are effectively distilled and this gives the sense that everything that is included is of importance.

Citizen Jane covers topics that make it suitable for cinemas even if it is not as cinematic as some recent documentaries. We have been blessed in recent years with some extraordinary non-fiction films, like The Act of Killing and Senna, which have really pushed the boundaries and form of the medium. Director Matt Tyrnauer’s work is more traditional and falls in line with films like The Case Against 8 and Life Itself, which contain similarly interesting stories told in a straightforward and direct manner. As engaging as it is I don’t think it would make that much difference if Citizen Jane was seen on a small or big screen.

Citizen Jane is intelligently and compassionately told and highlights why Jane Jacobs deserves to be seen as one of the great minds of the twentieth century. It may not be full of flashy visuals but is compelling in its attempts to humanise city landscapes.

Citizen Jane is on general release from Friday May 5th